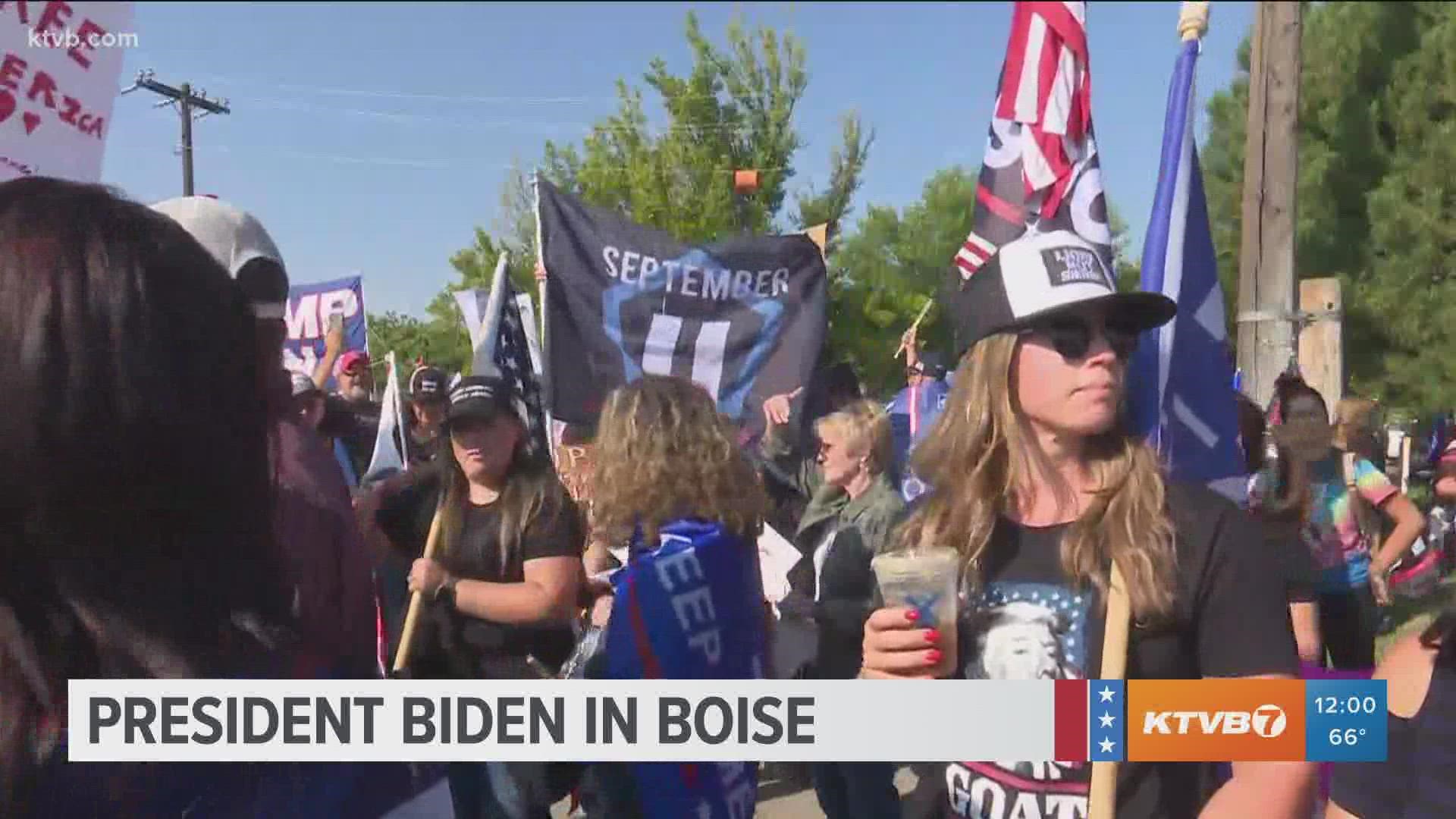 BOISE, Idaho — Hundreds of protesters gathered near the Boise Airport and the National Interagency Fire Center on Monday to rally against the arrival of President Joe Biden.

Some came to protest the recent Afghanistan withdrawal while many others were opposed to COVID-19 measures such as vaccine mandates. Last week, Biden announced new rules mandating all employers with more than 100 employees require vaccinations or weekly tests for employees.

Morning protesters were honking horns and holding flags in support of former President Donald Trump. Some also held “don’t tread on me” signs, among other signs and flags showing displeasure with Biden’s various policies or claiming Trump won the 2020 presidential election.

A few protesters were carrying firearms.

Biden’s trip Monday to attend a wildfire briefing at NIFC as part of a western U.S. swing was his first official visit to Idaho as president.

Standing near the National Interagency Fire Center, Dykes said this year’s fire season was rough, but not by historical standards.

“There’s a push to claim that global warming has something to do with it but if you go back 100 years ago, or before the West was colonized … historically, the west burned way more,” Dykes said, holding a “STOP THE MALARKEY” sign. “There is no climate change reason for any Chicken Little screaming.”

The severity, damage and cost to fight wildfires has risen in recent years, and more than 90% of climate scientists say climate change is caused by humans and contributing to worsening fire conditions.

Ada County Commissioner Ryan Davidson came by to participate in the “great American tradition of the other party protesting the president.” He said the turnout was a nice surprise, though, others were hoping for more.

“And whether you like Trump or not, that’s not the way our country is supposed to work. There should be an ease in the transition into a new administration, and he just came in and just chopped everything up.”

McKnight organized one of at least three protest events created on Facebook.

“Bring your anger, your voice, your cameras, and a picture/sign of an American who Biden is responsible for killing in Afghanistan,” the event details said.

In states that are overwhelmingly on one end of the political spectrum, there is a much wider array of viewpoints within the dominant party, said Charles Hunt, a Boise State University assistant professor of political science.

It’s normal for presidents to face protests when they visit anywhere, Hunt said, even in friendly areas because the president is a national figure.

At least two other protest events were created on Facebook.

One, organized by Sarah Anne was called PROTEST BIDEN IN IDAHO, wrote in the event details asking Idahoans to join to “show your disgust for a man who is doing all he can to destroy the United States.”

Another event, hosted by the Idaho Liberty Dogs, was called “Unwelcoming of Joe Biden in Boise.” The event’s page showed a photo of the Statue of Liberty slapping Biden.

“This traitor will be stopping in Boise on Monday. Let’s fill the streets with Patriots, Flags and signs! You won’t want to miss this!!” the event details said.

Protesters came from different parts of Idaho. One woman, Christi Bergen came from Rupert with her eight children. She made the two-and-a-half hour drive because she wanted to say that the people are not OK with Biden forcing vaccines and other mandates.

Bergen works for a company with more than 100 people, so she would be affected by Biden’s recent vaccine mandate. Bergen brought shirts that said “Vaccine Shmaccine” on it, with a fake vaccination card attached as a tag.

“I would quit my job if they forced me to take the vaccine,” Bergen said. “It’s my body, my choice.”

Protest scene at 10:30 am outside NIFC as the crowd is waiting for President Biden’s arrival pic.twitter.com/z08PiWcOJ9

Quick check in from @NIFC_Fire as we wait the arrival of @POTUS @JoeBiden. On the other side of security is a large crowd of Trump supporters/Biden critics #BidenInBoise pic.twitter.com/IiBsDBPPYj