The stop comes amid a severe drought that has gripped Western states, sending reservoir levels plunging and leaving millions of acres scorched by wildfires. 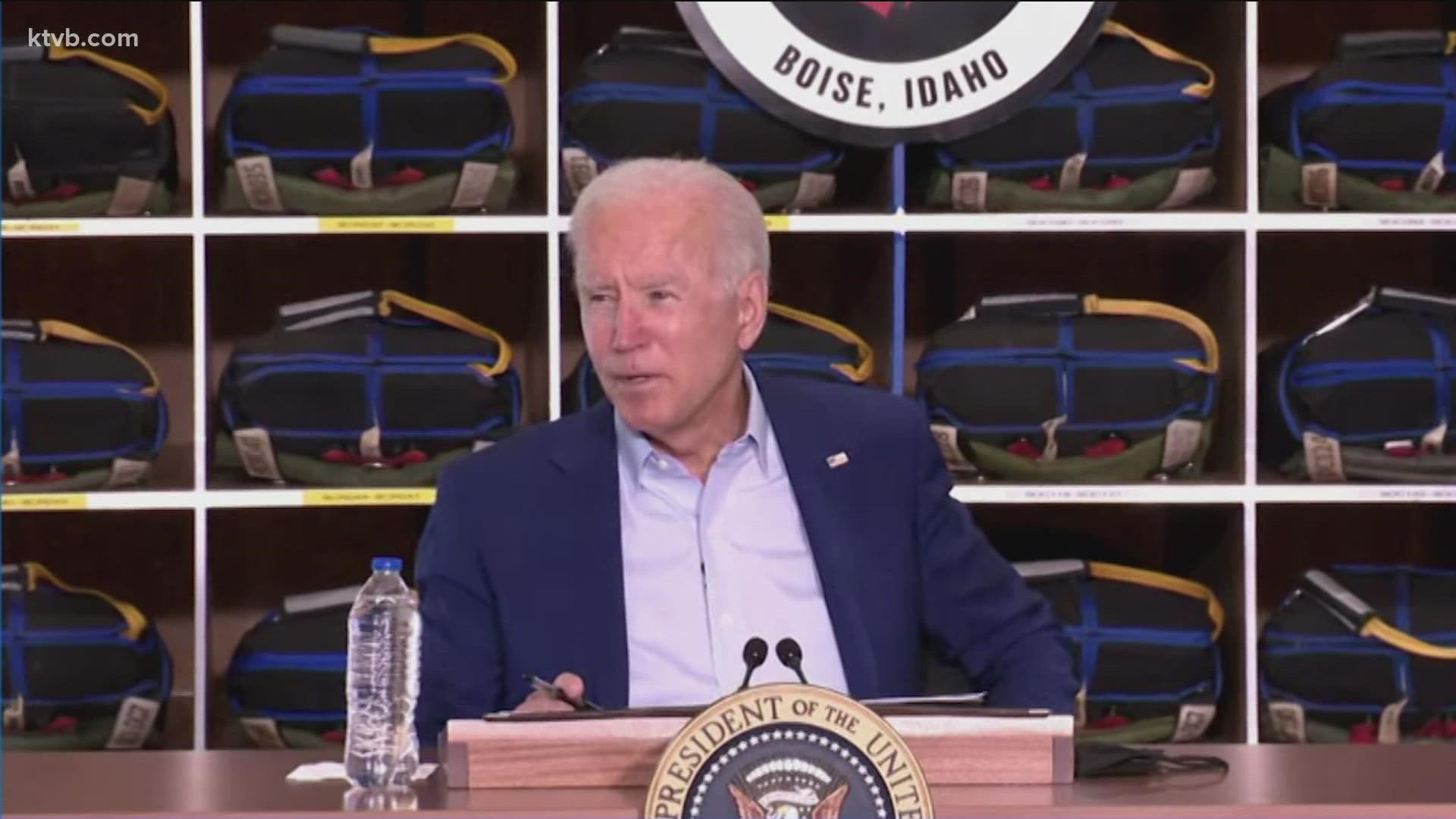 BOISE, Idaho — President Joe Biden stressed the urgent need to fund the fight against climate change during a Monday visit to Boise, which also saw the president meet with smokejumpers, talk wildfire prevention with Idaho officials, and take a tour of the National Interagency Fire Center.

The stop in Idaho's capital city - Biden's first since his election as president - comes amid a severe drought that has gripped Western states, sending reservoir levels plunging and leaving millions of acres scorched by wildfires.

Biden pointed to the worsening fire season in Idaho and across the West as the consequence of a warming planet, telling those gathered at NIFC that extreme weather changes will get worse, not better, without action.

"It's not a Democrat thing, it's not a Republican thing," the president said. "It is a weather thing. It is a reality. It is serious."

The Commander in Chief touted his $3.5 trillion Build Back Better infrastructure plan, a portion of which focuses on establishing an energy efficiency and clean energy standard, creating jobs in the clean energy sector, and creating a Civilian Climate Corps.

"For every dollar we invest in resilience and in building back better, we save $6 down the road in the future," Biden said, adding that extreme weather events like hurricanes, wildfires and floods cost America $99 billion in 2020.

It’s a big day for the wildland fire community. @POTUS, notes 44,000 wildfires during #FireYear2021 have burned over 5.4 million acres... "that's larger than the entire state of New Jersey." pic.twitter.com/05zbU6gxM0

Idaho Gov. Brad Little, a Republican who has publicly found fault with many of Biden's policies, thanked Biden for coming to NIFC, adding that creating "a more resilient range and forest ecosystem" was critical in Idaho's wildland fire fight.

"We know that about a third of the forests are at risk of big catastrophic fires, and we have got a lot of work to do," Little said.

During his visit, Biden also met with a group of smokejumpers - shaking each crew member's hand, and speaking with them quietly - as well as Boise Mayor Lauren McLean, who greeted the president on the tarmac after Air Force One touched down. The mayor said before the visit that she intended to speak with the president about Boise's work to meet its climate action goals and present Biden with a painting of the foothills by artist Rachel Teannalach.

Biden was also given a tour of the facility, along with vehicles and tools employed by wildland firefighters. At one point, the president hefted a Pulaski, a half-axe, half-hoe used by wildland crews to cut limbs and build fire breaks.

A large crowd of protesters lined the streets outside of NIFC, many waving signs in support of former president Donald Trump and opposition to a host of Biden's policies, ranging from immigration to COVID-19 vaccine mandates to the U.S. departure from Afghanistan.

Biden last visited the Gem State in 2009 for the Winter Special Olympics. Former president Barack Obama came to Idaho in 2008 and in 2015, but Biden, then the vice-president, did not accompany him on those trips.

The entire stop lasted about two hours, with the president loading back into Air Force One and departing Boise shortly before 2 p.m. Mountain Time. According to the White House, Biden will next fly to Sacramento, California to survey the damage from the Caldor Fire, then to Long Beach, California to attend a campaign rally in support of California Gov. Gavin Newsom, who is facing a recall election.

For more on the presidential visit, download the KTVB mobile app here.

Watch below: Learn what NIFC's role is in U.S. firefighting efforts: