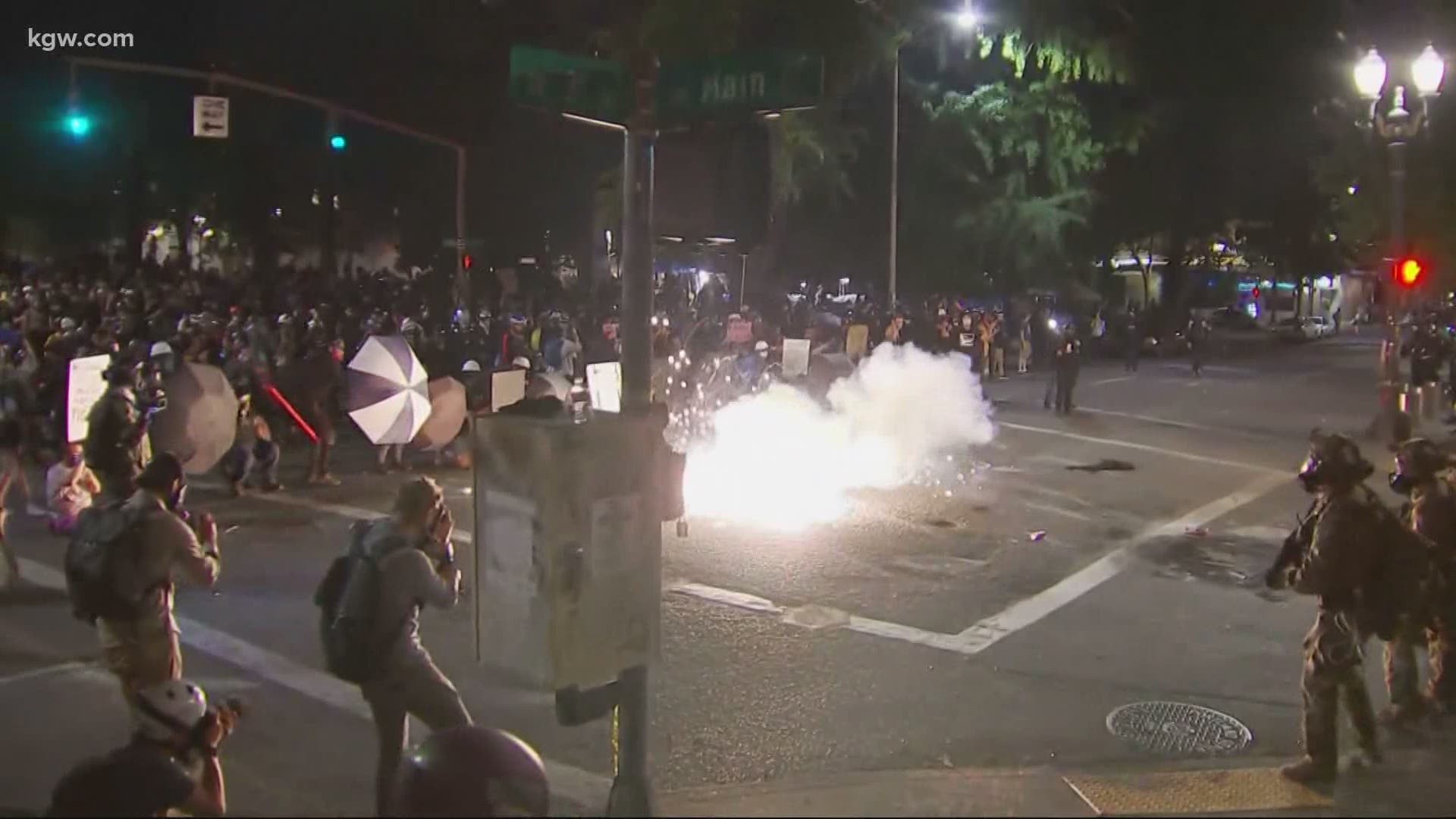 At 10 a.m., Mayor Wheeler spoke with reporters about ongoing tensions in Portland.

Demonstrators and federal officers clashed again on Wednesday night in downtown Portland hours after Oregon Gov. Kate Brown announced an agreement with the federal government that included a phased withdrawal of federal officers.

RELATED: Tear gas in the air, officers hit the streets on Day 63 of Portland protests

Wheeler answered questions on multiple topics, including the presence of federal officers; the role of Oregon State Police in the protests going forward; the use of tear gas by Portland police; and what it will take for the protests to end.

Wheeler said he is "cautiously optimistic" that federal officers are poised to leave Portland after nearly a month of clashing with demonstrators at nightly protests. He praised Gov. Kate Brown for her work in negotiating an agreement to get federal officers to withdraw from the city.

Wheeler said he wasn't surprised to see that there was conflict between the message of the governor on the withdrawal agreement and the response from President Donald Trump and other federal officials, including DHS Acting Secretary Chad Wolf.

"I trust the governor on this one," Wheeler said. "My expectation, as well as the expectation of the governor is that this deal will be adhered to and the federal presence will leave."

Wheeler said communication will be key in coordinating that hand-off. He said it's his understanding that OSP will be the sole law enforcement presence at the federal courthouse and that Portland police won't be involved.

"I will defer to the Portland Police Bureau and state police," Wheeler said. "But my understanding is that it will be exclusively OSP. If that has changed, I'm not aware of it."

Use of tear gas by Portland police

Wheeler apologized for the Portland Police Bureau's use of tear gas on protesters early on during the protests for crowd dispersal.

"It never should have happened," Wheeler said. "I take personal responsibility for it and I'm sorry."

The mayor said Portland police have used tear gas twice during the month of July, since he issued a tactical directive that Portland police should use tear gas only in cases where a person's life is threatened.

He said he wanted to make it clear the difference between the use of tear gas by Portland police and federal officers, who Wheeler said have used it this month "broadly, indiscriminately and nightly."

Wheeler said he, Gov. Brown, and leadership from the Portland Police Bureau and Oregon State Police have agreed that tear gas will not be used on protesters unless there's risk of injury or death.

What it will take for protests to end

The mayor said that it will take more than just a change in policing strategy to end the protests. He said demonstrators and activists will need to see that their demands and concerns about racial justice and equality have been heard and understood, and that they're able to see real progress in meeting those demands.

"People need to see that those of us in positions of power have heard and understood and taken concrete steps towards enacting those demands," Wheeler said. "It doesn't mean people should then take the pressure of of us. But I think then you'll see beginning of the end of nightly demonstrations."

Wheeler ended his comments by speaking out forcefully about racist, threatening emails that his colleague, Portland City Commissioner Jo Ann Hardesty, has received in recent weeks.

"I have been watching how some have been engaging with Commissioner Hardesty," he said. "She is getting emails that are flat-out racist. If you ever wonder whether racism is still alive, I can confirm that it is, and that she has been subjected to it. You can disagree with Commissioner Hardesty or me or anyone else on the city council. But do not send the kind of emails she has been receiving that go way over the line. They are flat-out racist and threatening. Those kinds of emails will never be acceptable in a civilized society. They are not welcome."

Portland Police Bureau Chief Chuck Lovell answered questions from reporters during a news conference at 11:15 a.m. He spoke about the new partnership with Oregon State Police as federal officers leave downtown Portland; how the presence of federal officers affected the protests; and the increase in deaths and shootings in the city, among other topics.

Lovell said he's hopeful about that new partnership with OSP and also the Multnomah County Sheriff's Office. He said Portland police has trained with OSP in crowd control events in recent years.

"I'm hopeful we can work together and communicate, and be successful in managing these events much better than they have been in the past few weeks," Lovell said.

Lovell said he hopes that with the new collaboration with OSP and MSCO, that the protest response can get back on track.

"Around the 4th of July, we were experiencing crowds greatly diminished in size. The violent activity was much lower. We’d gotten to a place where we were on a good trajectory," he said. "The federal arrival became an escalating factor, increased the crowd size and the violent factor. ... I’m hopeful that this new partnership with OSP and MCSO gets us back on track to where we were prior to the 4th of July.

Increase in deaths and shootings in July

Portland police said there has been a sharp increase in shootings and deaths in the city in the past month.

Lovell said it's a concerning trend and that the bureau is taking steps to address it.

"We're going to resource some more people to the detective division to follow up and do some investigation," he said. "We also need to do some proactive work to keep this from escalating."

Lovell said the loss of the gun violence reduction team, which was disbanded July 1, has stressed the department.

"We've had to look at what resources we can bring to bear without the structure of that gun violence reduction team," he said.

The move was requested by Oregon State Police as part of the plan for federal officers to leave, according to Wheeler.

During Thursday's press conference, Lovell said the goal of clearing the parks was so that some repairs, renovation and cleaning can happen. He said they needed to make it safe for park employees and city employees to that work in a safe environment.

This morning, @PortlandPolice will be working with Portland Parks & Recreation, the @multcoso, and outreach workers to clear Lownsdale Park. This is at the request of @ORStatePolice as part of the plan for federal officers to leave our community.