Wait, is that a camel? In Meridian? Animal parade brings joy and wonder to Treasure Valley neighborhoods

A group of volunteers organized an animal parade to march down the streets of some Treasure Valley neighborhoods, all while collecting food donations. 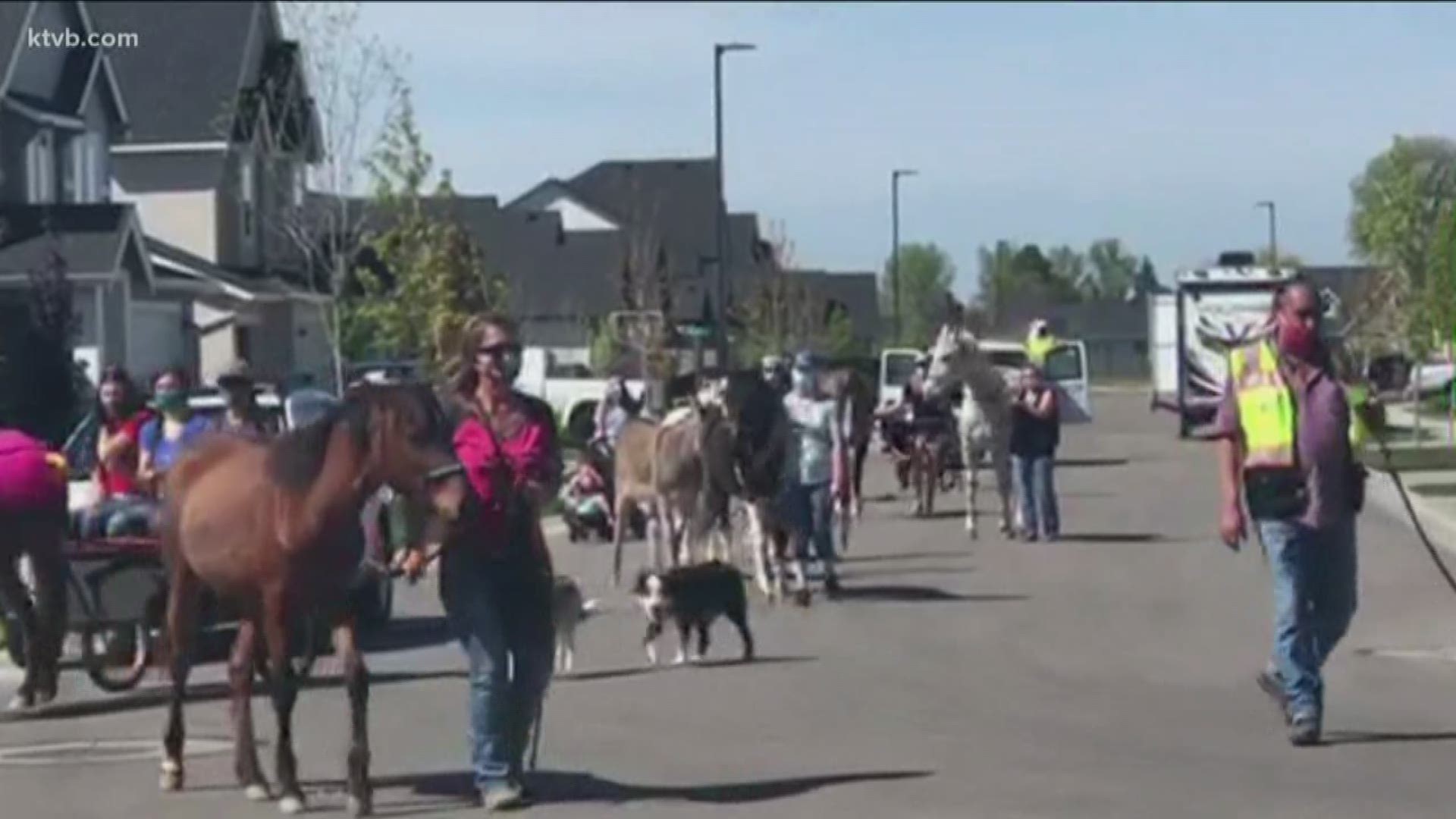 BOISE, Idaho — Risa Roe is a Treasure Valley business owner. She and her husband live in Meridian, and they own a local horse boarding business and a painting company. She said they've been lucky enough to keep working through the COVID-19 crisis, but she was worried about so many in our community who were not that fortunate.

"As soon as this COVID-19 thing hit, we were really worried about the community. We were worried about our community not able to feed their families and take care of themselves," Roe said. "I kept trying to find a way to help out."

Roe wanted to do something to help gather food for those in need, and she did, in the most delightful way. She put together a team of volunteers who love animals as much as she does, and they organized a socially distanced animal parade for a Meridian neighborhood.

There were donkeys, horses, goats, chickens, dogs, and ducks! There was even a camel in the parade. Yes, you read that right, a camel!

"It was really fun to watch the kids come out and see animals they have probably never seen before," she said. "These poor kids, they are not with their friends, they are not in school, they are not having the fun outlets they used to have. If there is a need for some entertainment for the kids in our community, we decided we would be very safe, wear masks, and we would walk down their street so they could see something! I could see the kids lining up and it just brought me so much joy to my heart, because as you are coming down the road you see the kids waiting anxiously to see these animals, and of course the camel lead the parade. It's the craziest thing to see a camel walking down the street. I would hear things like mommy, I can't believe this is actually happening!"

1 / 22
Laughing Horse Boarding and Horse Motel
A group of volunteers organized an animal parade to march down the streets of some of our local neighborhoods. The parade was also a food drive to gather food for those in need in the Treasure Valley.

Three lucky subdivisions were treated to the parade, but it wasn't just a parade, it was also a food drive! Roe's team got the word out about the food drive on Facebook and on the Nextdoor app.

"If they can leave food while we walk down the street with these various animals great," Roe explained. "If you have the means to put some food street side, go ahead and do that and we will pick it up. If you don't have the means, don't worry about it."

The people living in the communities the animal parade visited gave generously! Volunteers on the parade route collected thousands of pounds of food.

Roe said it has been amazing to give back in this way. She knows it's something these families will never forget.

"I am grateful to have the ability to offer the community something that I hope gives them hope, and some food if they need it," she said. "These lucky kids will look back and say, 'Remember that time a camel came through our subdivision?' They will remember that for the rest of their lives!"

Would you like to have a parade like this on your street? Roe and her group of volunteers are offering a grand finale neighborhood parade for one lucky neighborhood in June! You can enter the lottery to win the parade.

RELATED: 7’s Hero: People in the Treasure Valley step up to help others in need during the COVID-19 pandemic