Ryan Lancaster and Max Mohammadi say it's their mission to give back to the less fortunate. 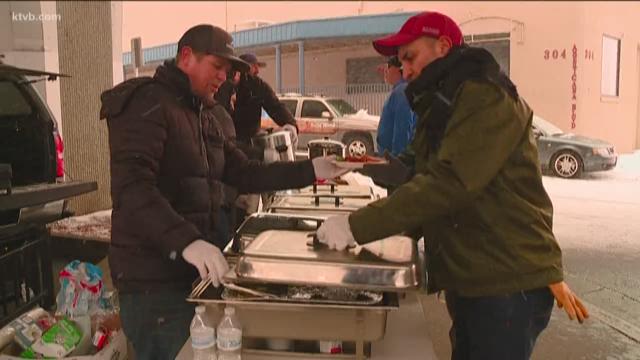 BOISE - Two local men are making a big difference by helping the homeless in downtown Boise.

We spent some time with them out in the cold and the snow, to see what they do to give back.

One Saturday a month, Ryan Lancaster goes all out, cooking for dozens of people he doesn't even know. It's something he loves to do.

Sponsored by several local companies, Lancaster and his group of volunteers set up an amazing buffet by Rhodes Skate Park in Boise.

"We've got a great team that comes together and likes to help out," he said. "We started off feeding about 40 people a month, and just through donations, generosity of businesses here in town and different friends we've been able to bring it up to about 120 people a month now and we'd just like to see that increase."

Lancaster says it is something he was called to do.

"I just try to do my best to help out," he said. "Get to know these people and get to talk to them on a personal level. I just know they are in a bad position and they are very thankful, sometimes they break down into tears. It's really touching."

Lancaster isn't the only one out here giving from the heart. He is joined each week by his friend Max Mohammadi.

"He has a nonprofit here in town called Max Giving," Lancaster explained. "And he does so much for these homeless people every day. Every day of the week he's out here."

Mohammadi picks up food donations daily from local restaurants and passes them out to those who need it the most. He's been doing this for years.

"I call this bridge my office and I really mean it," he said. "A lot of great people live here and they just happen to be in a tumultuous time, and we just want to be there to give a hand up."

These two giving men are examples to everyone around them, and to each other.

"We inspire each other, and love what we do for our community," Mohammadi said.