Lito Mason noticed a boy in need at a local store in Meridian, and offered to buy him a pair of back-to-school shoes. This photo taken right after that went viral. 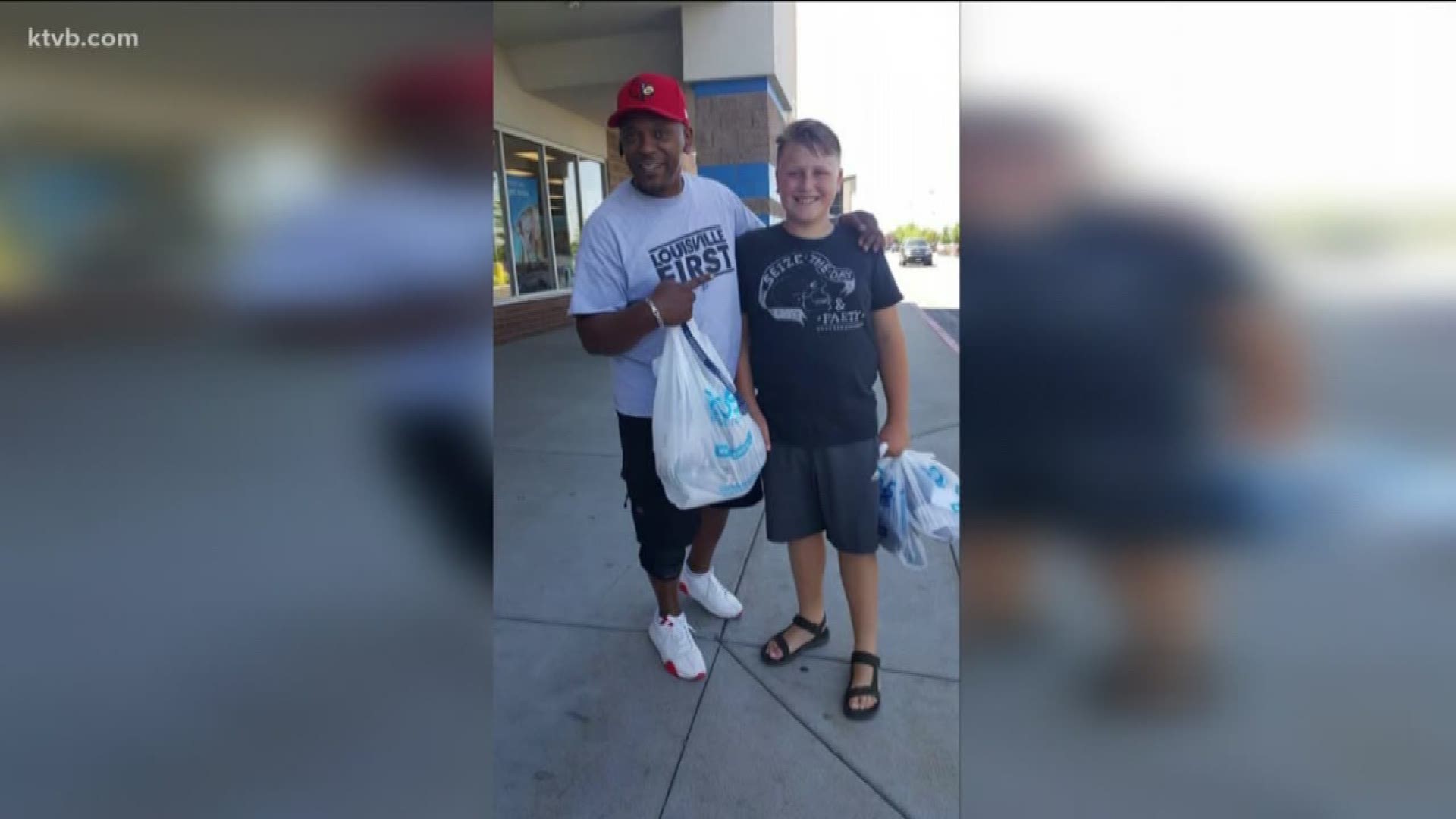 MERIDIAN, Idaho — A Boise man’s act of kindness is going viral on Facebook, and he says he can’t believe it’s getting so much attention.

Lito Mason was shopping at a discount store in Meridian when he happened to notice a boy and his mom.

“I didn't realize it was going to be such a big deal,” said Mason. “To see me plastered all over the internet? I’m really a shy guy.”

“I had the same shoes for about nine months and the bottoms of them were destroyed,” Zach said.

Single mom Malisa Manguso told her son money was tight, as he picked out different shoes to try on.

Mason was also shopping for shoes, and he overheard the conversation between mom and son.

“She was working with a budget and I get that, we all get that at this time of the year, back to school,” said Mason. “I asked him, 'so what type of shoes do you like?' He said 'I just want something that's comfortable.' I was done! At that point, I said I'm going to get him whatever he wants.”

Zach’s mom couldn’t believe what she was hearing from a total stranger.

“He just out of the blue looked at me and said, I tell you what, that kid has to have good shoes on his feet and has to be looking good to go to Junior High. You just pick out the shoes, and don't worry about the price,” said Manguso. “For the first time in a long time, I saw Zachary light up, and be so happy.”

Zach picked out the perfect pair of back-to-school shoes with Mason. He says he couldn’t believe someone would do that for him.

Credit: KTVB
Zach Stone picked out these back-to-school shoes with Lito Mason. He was shocked someone would step in, offer to buy them, and help him and his mom.

“Not at first, because it's very rare for something like that to happen, that somebody would actually do that,” said Stone.

Manguso took a photo of her son and Mason to remember this incredible act of kindness. She shared it on Facebook. That's where we saw it, and shared it, too.

The photo now has over 15,000 likes and hundreds of comments and shares. The response was incredible. People called Mason a hero for his generosity.

Meanwhile, Mason had no idea that the story of the shoes was going viral online.

“One of my former coworkers tagged me in this post and I see my picture and I was like wait a minute! I was a little shocked, and then I started watching this thing and people started inboxing me and I was like, okay this is getting a little crazy,” said Mason. “I guess I give people more credit than I should sometimes because I was like anybody would have done it.”

Mason says he’s not a hero, this is just something he felt he needed to do.

He says he gives people a hand up whenever he can afford it.

“It's just something I wanted to do. For one time in his life, I didn't want him to worry about a price, and it was simple as that,” Mason said.

Credit: KTVB
Zach Stone and the his hero, Lito Mason. Mason bought him a pair of back-to-school shoes at a local store when he overheard that money was tight for his single mom.

“To have somebody, out of the blue, you don't even know them, they don't know you, to help a child, to me that meant the world,” said Manguso. “I think people like that should be recognized.”

Mason says he hopes the story inspires more people to help people in need when they can.

“In this world where things have gotten so ugly and all over the place, there are still some good people out here.”