The group is called Treasure Valley Pay it Forward to a Server. The video of a massive tip for their server at a restaurant in Meridian went viral on Tik Tok. 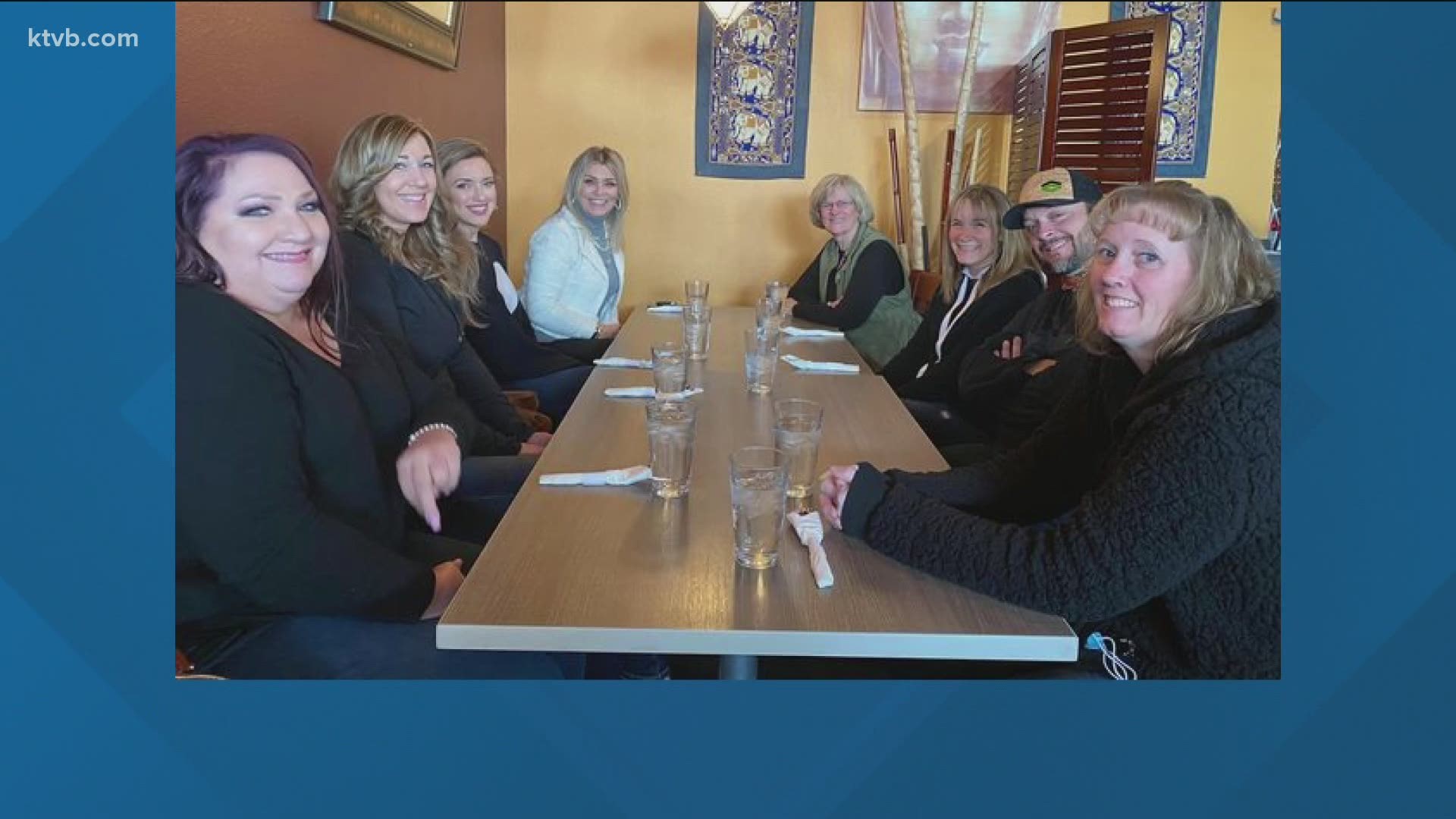 MERIDIAN, Idaho — In January 2020, Karissa Patterson of Boise was inspired to get a group of people together to go out to local restaurants and leave huge tips for the servers.

The tips were hundreds of dollars, sometimes more.

The group of about 60 members pools their tip money as a way to pay it forward. Patterson even started a Facebook page for this group, called Treasure Valley Pay it Forward to a Server. They posted inspiring photos and videos from their tipping experiences.

"That's our intent, it's just to go out and bless someone," Patterson said. "It's more about living a generous life and always paying it forward, even in small ways."

Then, the COVID-19 pandemic hit, and everything shut down.

For the last year, restaurant workers have been struggling, with fewer people dining out and rather opting for take-out. When COVID-19 numbers started to improve in February, this group decided to start back up again.

"After all the shutdowns and everything, we finally got to get back together, everyone felt comfortable," said Patterson. "I love this place called Thai Basil in Meridian, so I suggested we go there. Benz was our server that day."

Benz Summart, who has been an employee at Thai Basil since 2018, thought it was just another day on the job.

"They were my first table that came in to eat," Summart said.

2020 was a struggle for Summart, just like so many others in the restaurant industry. He depended on takeout orders and tips.

"It did affect me quite a bit, but I was thankful to have a job, so I was able to work," he said.

Summart served this special group lunch but had no idea what was about to happen.

"At the end, I think he thought we wanted him to take a photo with us, because I asked him to hold out his hands," Patterson said. "I just started by putting one fifty-dollar bill in his hand, and then we just went around the table. At the end, I put another 450 dollars in fifties and it was so fun, his reaction was great."

Summart was stunned and speechless: the group tipped him a thousand dollars!

"I held my hands out and they just started handing me all these fifties and hundreds I was so in shock. I didn't know how to act," he said. "I just started crying. It was such a heartfelt moment in my life, and I felt I had to bless others with it as well, so I did. I paid it all forward."

10pm on @KTVB, you’ll find out all about a special group of heroes in our community. Their goal is to go out to eat at Treasure Valley restaurants, and tip our struggling servers BIG! Tonight you’ll get to see the pure joy (and tears) the experience brings to everyone! #7sHero pic.twitter.com/F3g4L9HPcT

Summart shared his huge tip with some of his coworkers, and then with other servers and bartenders at his favorite spots in town. He says he just had to share the love. The group was so impressed when word got back that that's what he did.

"We definitely got the most deserving human to bless that day," Patterson said.

A video of what happened at Thai Basil that day was posted on Tik Tok, and it went viral fast.

"That one has four million views," said Patterson.

The story was also picked up by national media outlets. Patterson posted on the Facebook page as well.

"I'm just really thankful that it's spreading," Patterson said. "We're hoping that other people will form their own groups and go out and do the same thing in our community."

People have begun to recognize Summart from that viral TikTok video.

"Everywhere I go right now," he said. "People come into my work and they mention the TikTok video, they mention Facebook."

This group is counting on inspiring people all over the world to give back!

"That's just the best way, to multiply the love, I think it's a mindset and a heart set of always living a generous life," said Patterson. "Just to do something kind for someone. It feels so good."

The group encourages you to like the Facebook page so you can see what they are up to. They already have a lunch date planned for this month. Who will the lucky server be?