Bobby Sutcliffe, an employee at Vista Chevron, and his coworkers purchased a new bike for one of their regulars who has brightened their days during the pandemic. 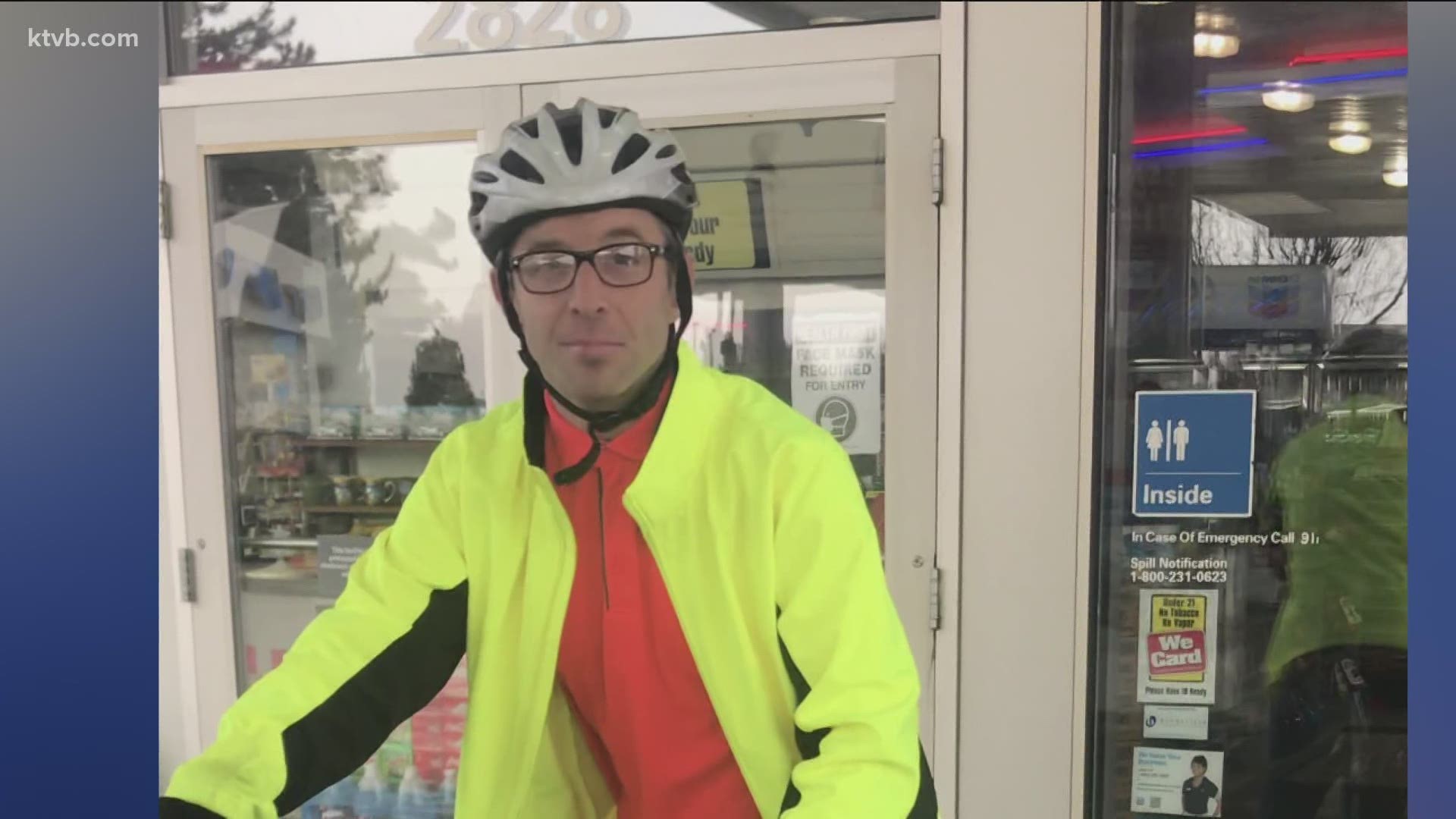 BOISE, Idaho — Bobby Sutcliffe works at the Vista Chevron by the airport in Boise. He loves his job, his coworkers, and his regular customers.

One of those regulars is Chris McDermott.

“We have like seven or eight employees, and the second somebody sees him, it just lights up the workplace," Sutcliffe said. "I mean, I just love him. We have people come here just to see Chris. They say, 'Has he been here yet?' 'Is he coming?'

McDermott and Sutcliffe have become close friends over the last year, due in part to McDermott's love of his bike. It's his main source of transportation.

“He pulls up like it's an oil change and we'll look at his chains and his foot pedals, and we just kind of started to build a relationship from there," Sutcliffe said. "He always comes in and fills up his water bottle with Dr. Pepper and gets a Krispy Kreme donut. He gave the best hugs before COVID. He was so happy to see us and he just kind of becomes part of the family."

Because McDermott has special needs, communicating can sometimes be difficult. But, Bobby says he just seems to have a special bond with Chris.

“Whatever special needs he has, I don't even see it. I just see the love that he brings. I just understand his smiles and fist bumps,” Sutcliffe said. “I come here a lot of days just to hang out at the shop, tell stories, and see Chris.”

Sutcliffe recently noticed McDermott's bike was becoming worn out and was in need of new brakes and pedals. He thought a new bike was in order and brought the idea up to his coworkers, who love McDermott as much as he does.

“It weighed heavy on my heart and I was going to do it by myself, but I looked at the employees and I said we have to do something. We have to get him a bike,” Sutcliffe said. “I kind of proposed it and it happened just like that. Immediately everybody was coming together, budget wasn't an issue.”

The day they surprised McDermott with the new bike was so exciting for the whole Chevron crew. Sutcliffe could hardly wait for him to get to the gas station.

“How it made me feel? Like Christmas morning, giddy!” Sutcliffe said. “It couldn't have gone any better. I got my fist bump and a smile, and to see him ride off safely. It's rewarding."

#7sHero Chris McDermott rides his bike all over Boise, his wheels mean the world to him, and the crew over at the airport Chevron noticed his bike looking a little shabby. What happened next will warm your heart. Watch a story all about kindness tonight at 10pm on @KTVB. pic.twitter.com/Dp2XuFEfBC

Sutcliffe posted the touching video on his Facebook page and got hundreds of likes and comments from friends. Some people recognized McDermott, saying they have seen him at several popular spots around town. He wasn’t surprised to hear that.

“Apparently he's spreading love all throughout the community,” Sutcliffe said. “He's a very big part of our family and community.”

McDermott delivered a card to the employees at the gas station saying thank you, which touched Sutcliffe's heart.

“It feels good,” he said. "Not only are we the greatest place to live, but we could be the kindest place to live. It's such a crazy world right now, we all need this, right?”