Pete Goers was having a hard time getting to the playground at Kenneth Carberry Elementary, so the community came together to build him Pete's Path. 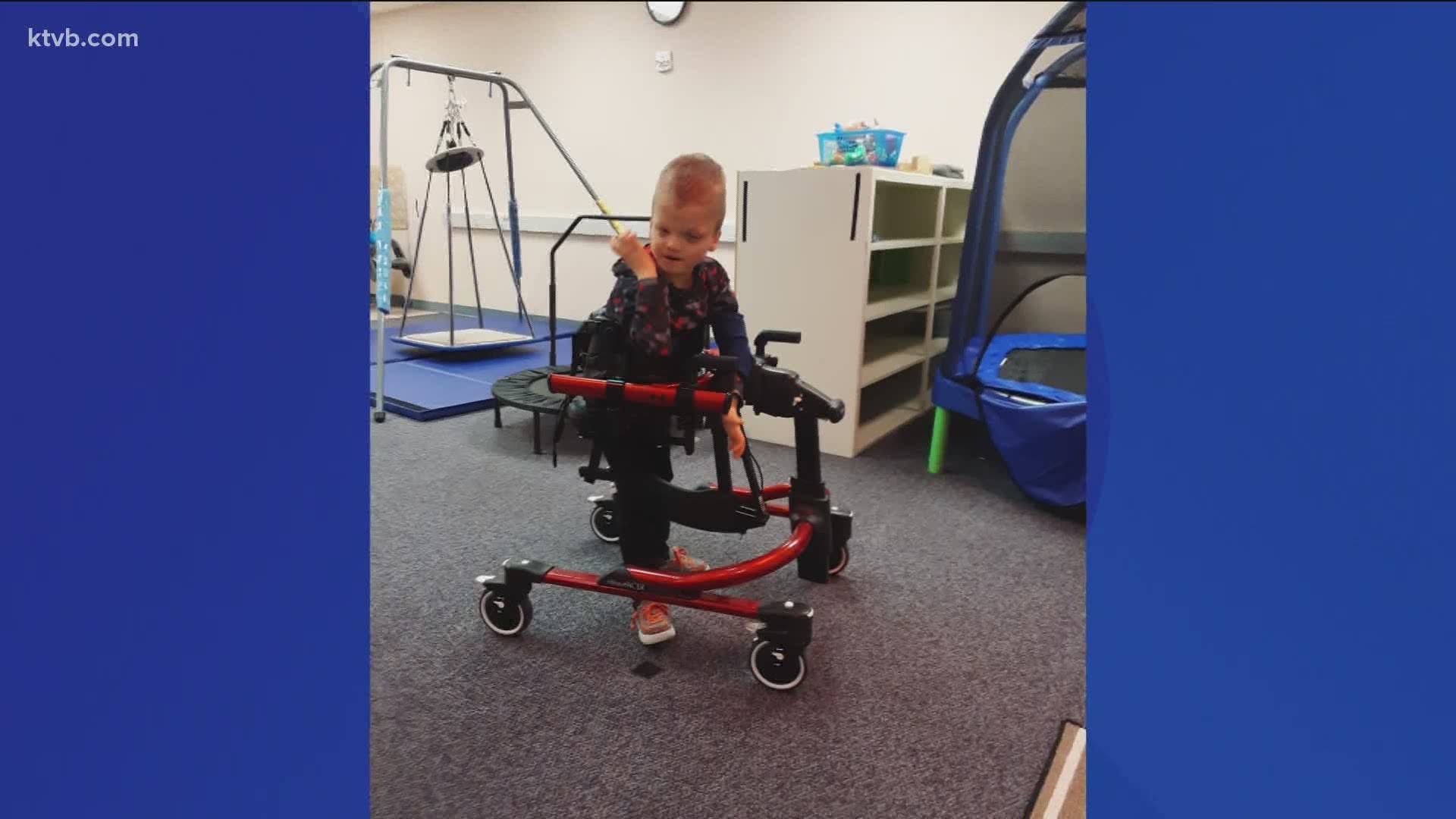 EMMETT, Idaho — 7-year-old Pete Goers of Emmett had a difficult start in life. When he was born, he had to undergo his first brain surgery within 24 hours.

His official diagnosis is Rhombencephalosynapsis (RES), which has caused hydrocephalus and global developmental delays.

“We knew when I was pregnant that there were going to be problems. We had a 19-week scan that showed severe hydrocephalus,” Pete’s mother Lara Goers said. “We didn't know what to expect, but what he has done so far has already beat the expectations of what was laid before us.”

Pete is now a first-grader at Kenneth Carberry Elementary in Emmett. His mother was hesitant about sending Pete to public school along with his twin brother, Dane.

“We have been the ones who have done everything for Pete and have advocated for Pete, every step of the way,” Goers said. “I was petrified to send Pete to school, I'm very protective. Are they going to be able to understand Pete, know what he needs? He's full support, he doesn't sit up, doesn't walk, doesn't eat by mouth, he's g-tube fed, and requires pretty much constant observation.”

Goers' fears quickly went away as each day went by, thanks to the incredible staff at Kenneth Carberry.

“He's doing great. His aide at school is absolutely amazing, and his special education teacher is also amazing,” she said. “He loves school, he needs school, and I'm so grateful to them for being able to provide that for Pete.”

Pete is one of four kids. The Goers family is known wherever they go in Emmett, and that's mostly because of Pete.

“I have so many little kids coming up, saying 'Hi Pete!' 'That's Pete!' 'I know him at school!' There are so many kids that interact with Pete because he is there at school," Goers said. "They have no problem, they are not worried that he is different or that he has disabilities. He is just one of them when he is at school."

“I love that we have inclusion,” Alexander said. “Just listening to Lara talk about Pete makes my heart warm because that's how we want every kid to feel. We get up as administrators every day to provide a safe environment. Parents trust me to be the parent when they are not here.”

Alexander takes that responsibility to heart. When he found out that Pete was having a hard time getting to the playground and swings in his walker, he decided the school had to act.

“Why make it complicated? Get the kid to what he wants," Alexander said. "He wants the swing, and watching the ladies trying to push him through the grass was ridiculous. We need to fix that kind of stuff."

Gordon Petrie, the mayor of the city of Emmett, and the P.E. teacher at Kenneth Carberry Katie Walton have been working on fundraising for a path for years. Alexander decided to commit to helping that effort in 2020.

“How much is it going to cost to go the 100 feet to get him to the playground? That’s the least we can do,” Alexander said.

Thanks to fundraising efforts and several generous donors in the community, the school was able to raise over $32,000.

“Our PTO, our fundraisers, and the Blue Cross of Idaho foundation recognized that need with us,” Alexander said. “They stepped in and helped us get to what we needed so we were able to do the whole 1/4 mile lap.”

Pete just happened to be the very first student to try out the new path. His aide Donna Hauser suggested the school name the path in honor of him. Everyone was on board and “Pete’s Path” was born.

The Goers family had no idea the path was named for Pete. It was a big, emotional surprise.

“I was full-on ambushed by Mr. Alexander,” Goers said. “He says, 'How would you feel if we named this Pete’s Path?' and I'm bawling immediately. I was humbled, I was blown away, I was excited, all those emotions.”

Pete now has no problem getting to the playground, and his story will always be a part of this path. The path's marker even has a special quote in his honor. It simply says “Inspiring potential.”

Pete Goers is in the first grade at Carberry Elementary in Emmett. He now has a path named for him at school! The path takes him to the playground. What a remarkable community effort! We have the story of how this happened & what it means to his family tonight at 10pm. #7sHero pic.twitter.com/r8l4jTC8y2

“I love what the quote is because everybody has potential,” Alexander said. “Pete's just an example of that, I love that.”

“It fills our buckets that our community and our school have rallied around Pete and all of us so much, and we are so grateful for it,” Goers said.

Pete has inspired something truly wonderful at Carberry during a really tough year. He is enjoying that path and the playground, rain, snow, or sunshine. So are all the other kids and staff at Carberry Elementary.

The total cost of the path was $32,300. Blue Cross of Idaho Foundation funded the majority of the cost, along with Emmett Mayor Gordon Petrie's winnings in the annual Mayors Walking Challenge and other fundraising contributions.