Kuna boy with a rare genetic disorder is celebrating a big birthday, and the whole community is invited

Kayden Herrity has neurofibromatosis, and he's turning six. After a tough year, his parents are inviting you to his drive-by birthday party bash Saturday, June 12. 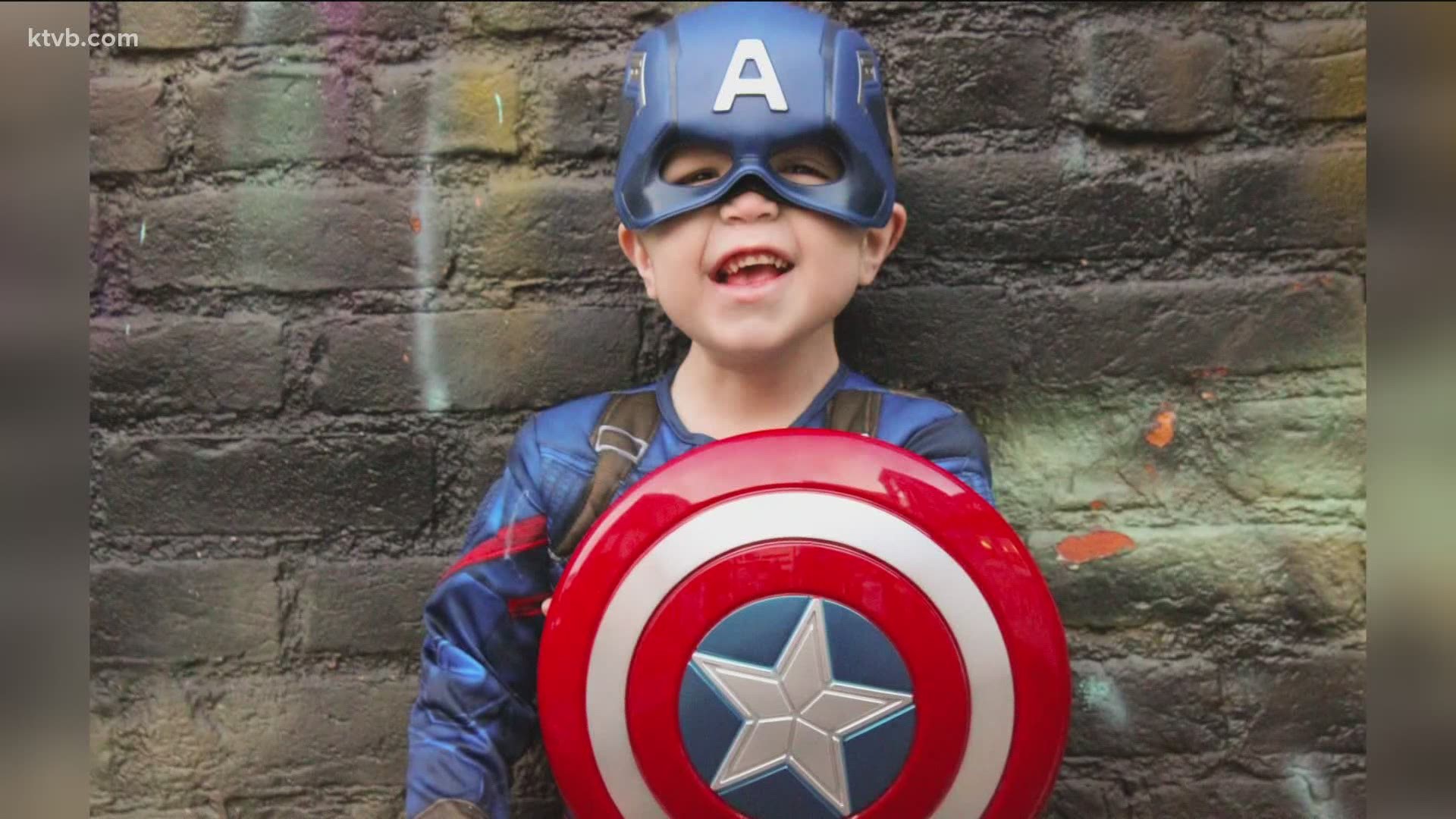 KUNA, Idaho — A little boy in Kuna has a big birthday coming up, and the whole community is invited to celebrate! The party is coming up this Saturday, June 12, and his family is working to get the word out now. They want to throw him a birthday party that he will never forget.

Five-year-old Kayden Herrity has a rare genetic disorder, and over the past 15 months, he's been staying home and staying safe due to the pandemic. He has NF, or neurofribromatosis, and that puts him at higher risk if he does contract the coronavirus. Neurofibromatoses are a group of genetic disorders that cause tumors to form on nerve tissue. These tumors can develop anywhere in the nervous system, including the brain, spinal cord and nerves. Kayden was diagnosed with NF when he was 18-months-old.

"NF can cause a lot of different things, a lot of big things are obviously the tumors on his nervous system, developmental delays, speech delays, and it's very common for kids to also have autism or ADHD, which he has both," Amanda Herrity told KTVB. "We see multiple doctors, lots of different ones, and the biggest thing right now is he on chemotherapy. He's was on IV chemo for a year, but he's now been taking the chemotherapy pill for a fibroma tumor on the right side of his eye. He's been doing that for two and a half years to try to shrink the tumor."

He has a optic glioma tumor in each of his eyes, as well as a neurofibroma tumor around his right eyelid and temple that wraps around his head. The tumor is benign and it's shrinking, which is incredible news. But, the COVID-19 pandemic has been tough on this little warrior. He's been spending a lot of time at home with his mom and dad. He's missing out on his normal activities, like school, birthday parties and playdates. He really misses his friends.

"It's been a big struggle for him, a big thing for him is social interaction with other kids," said Amanda. "We've been staying safe at home, and we will continue to do that until his oncologist says it's safe for him to go back out."

Kayden turns six this weekend and his family has big plans to celebrate his birthday safely this year.

"We are planning a cool drive-by parade since this is the second year in a row we haven't been able to have a birthday party for him," said his mom. "If anybody has super cool race cars, trucks, anything like that. Any old school cars? Come be a part of it! That's what we are hoping to get just a really cool drive-by parade so that he can wave to people and see people. If anyone want to decorate their cars that would be awesome, if they want to dress up like superheroes, we love superheroes!"

Tonight, you'll meet a tiny but mighty superhero from Kuna. His name is Kayden Herrity, and he's just 5-years-old....

The Herritys are hoping some Treasure Valley police cars and fire trucks will have time to come by to celebrate Kayden, too! He loves policemen and firemen. Our real life heroes.

Kayden's favorite superhero is Captain America. He has the full costume and wears it often.

"We call him our Captain America. We call him that because he's just a little guy with a big heart. When life throws a challenge at him, he just stands up and says I can do this all day, just like Captain America does."

Amanda Herrity is so inspired by her precious little boy.

"He gives me so much strength to continue pushing on and fighting for him," said Herrity. He's been through more than people go through in a lifetime. I can't think of a better hero to look up to, then him."

Kayden's drive-by birthday parade party is this Saturday, June 12! You are invited! Meet at Reed Elementary School in Kuna at 11 a.m.

The lead car for Kayden's parade will be a bright red 2019 Ford F-150. Cars will line up behind that truck for the drive to Kayden's house!