Cole’s Hero: Meridian nurse donates a portion of her liver to baby patient

Nurse Sarah Harris met baby Cole and his mom when he was just a few weeks old. The day she met him, she saw how sick he was and she offered to be his living donor. 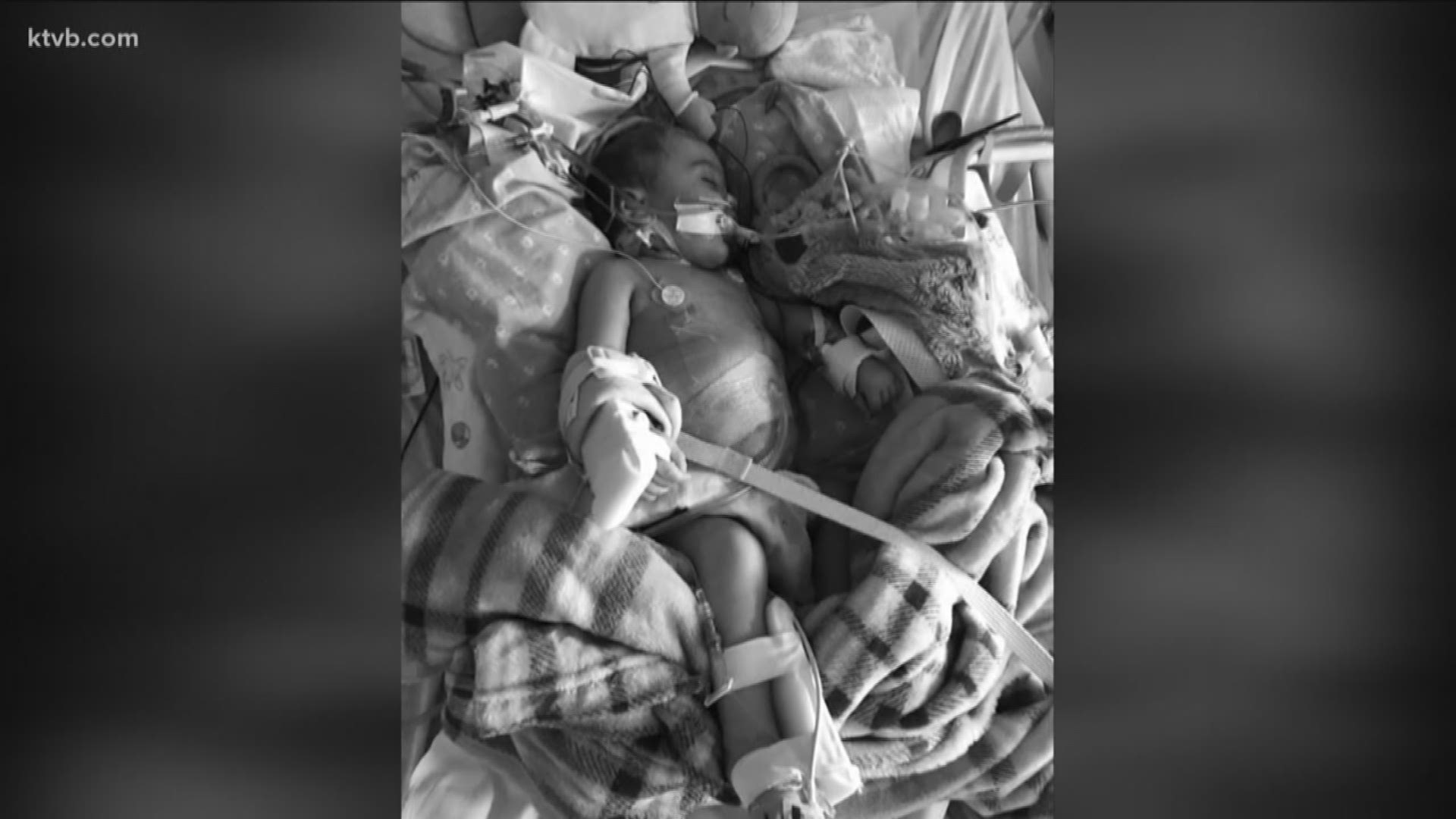 MERIDIAN, Idaho — Cole Carter was just six-weeks-old when his mom Jessica noticed his coloring was off.

“I think every mom worries about their babies, and I had seen a little yellow in his eyes. His skin was yellow,” Jessica Carter, Cole's mother, said.

Cole’s doctor at St. Luke's knew what it was right away - Cole had biliary atresia.

According to the NIH, the National Institute of Diabetes and Digestive and Kidney Diseases, it’s a condition in babies in which the bile ducts outside and inside the liver are scarred and blocked. Bile can't flow into the intestine, so bile builds up in the liver and damages it.

If corrective surgeries and treatments fail, a liver transplant for little Cole would be a real possibility. That ended up being the case, and it was the last thing his parents wanted.

“From the very beginning of the journey with biliary atresia, transplant is always on the table,” Jessica said.

Jessica and her husband Josh thought one of them would most certainly be a donor match for their baby. They quickly learned that was not the case. They were not a match for Cole.

“There was nothing we could do, we couldn't save him, and then when we tried to save him, they said, 'No, you're not a match,'” Josh said.

Jessica had just gotten the devastating results of their lab work on the way to a doctor’s appointment for Cole. She says she walked into the office in tears. She met St. Luke’s Pediatric G.I. Nurse Sarah Harris that day for the first time.

Credit: The Carter Family
“She is an angel sent from God! There is no other way to describe her,” Cole's father said.

Sarah noticed she had the same blood type as baby Cole. She immediately wondered if she could help.

“So when I got her all roomed, I went back to talk to his doctor and asked him what it takes to be a donor. I thought I can do that! I'm healthy!” she said. “So, I went back with a sticky note and handed mom a sticky note with my name and phone number, and said I would absolutely do this.”

Cole’s parents couldn’t believe what they were hearing.

“I thought this lady was crazy! Who is this woman that we've never met before, who met Cole, falls in love with him instantly, and says, 'Oh yeah, please take half of my organ,'” Josh exclaimed.

Things moved quickly with Sarah starting tests and lab work to see if she was a match for Cole. Incredibly, she was. She reassured her family that the transplant wouldn’t impact her in a negative way.

During the transplant, the surgeons would take a small portion of her liver, put that into baby Cole, and then Sarah’s liver regenerates to its original size during recovery.

The transplant was then good to go. After months of preparation, it took place in Seattle on the day Cole turned 7-months-old. It couldn't have come soon enough as Cole became very sick.

The 14-hour long surgery felt like an eternity for the Carters. Sarah came out of surgery just fine, but Cole was struggling.

Credit: The Carter Family
Following his surgery, Cole struggled for days in the hospital.

“We were in the ICU for almost an entire month,” Jessica said. “We lived in Seattle for four months total.”

It was a bumpy road for Cole and his parents. They started a Facebook page called "Cole's Liver Adventures" to keep family and friends updated.

“It also became a place for me to really process actually what had happened,” Jessica said.

The Carters were shocked by the response from people they had never met.

“Such kind people, like really kind loving people,” Jessica explained. “Seeing the messages of encouragement and love and prayer, it really made this whole journey possible.”

Today, Cole is back home in Meridian with his mom and dad and his big sister Everly. He’s doing well. Sarah and her husband, Chris, come to visit often. Both families recently celebrated Cole’s first birthday.

Credit: Megan Ann Photography - meganannphotography.com
After the Carters started a Facebook page for their son Cole, they were shocked by the response from people they had never met.

“We just love him, we're honorary aunt and uncle now,” Sarah said. “We're glad he's healthy and we can't wait to celebrate more birthdays with him!”

The Carters say Sarah is simply their hero. There are no words for how grateful they are.

“She is an angel sent from God! There is no other way to describe her,” Josh said.

Credit: The Carter Family
“We're glad he's healthy and we can't wait to celebrate more birthdays with him!" Cole's nurse and donor said.

Cole is now being closely monitored by his doctors to make sure his body doesn't reject the new liver.

For more information on being a living organ donor, click here.

See all of these heartwarming stories in our YouTube playlist here: