After a surprise cancer diagnosis and the death of her mother, 5-year-old Danni Harris has received an outpouring of love and support from her hometown community. 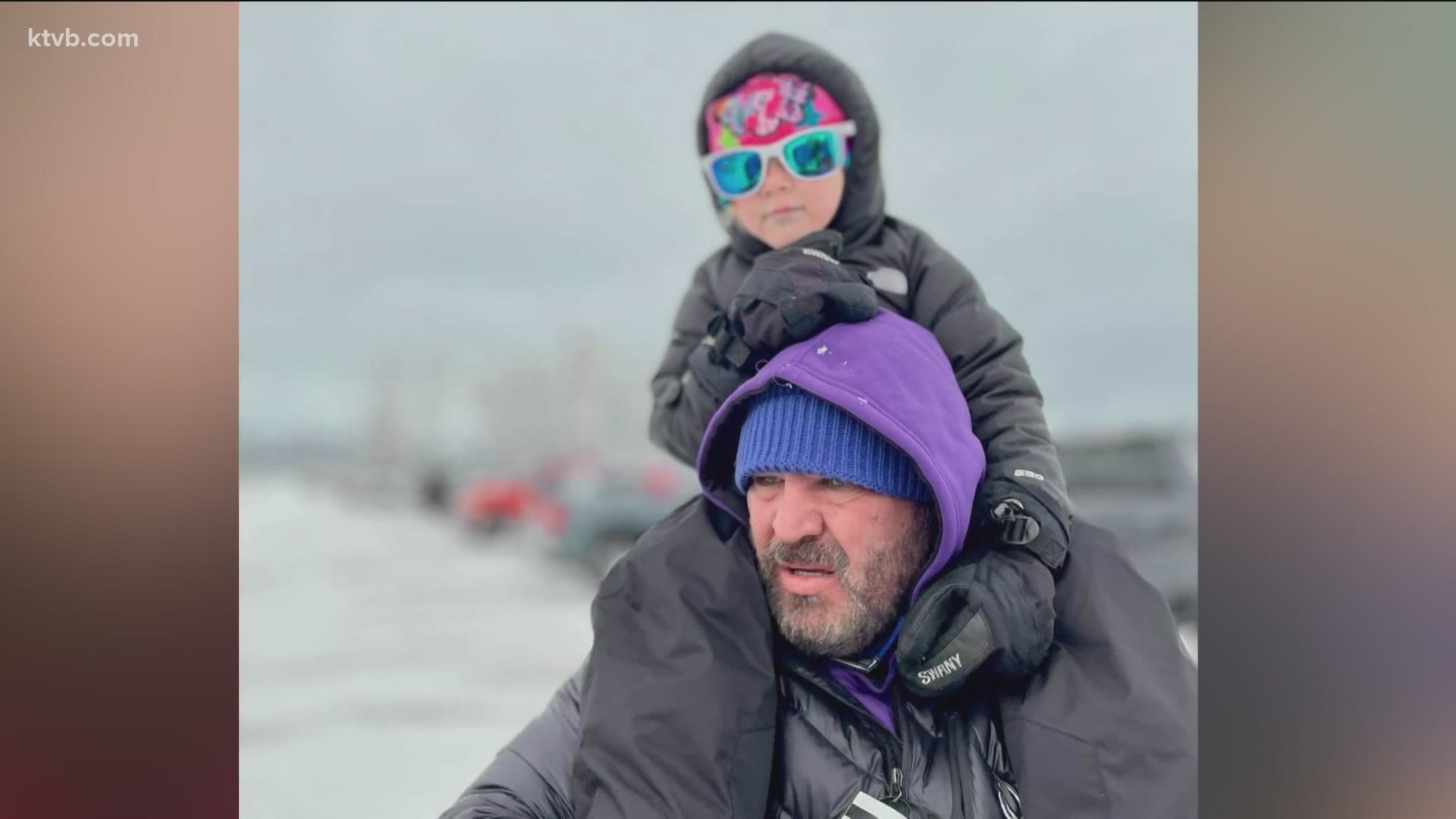 WEISER, Idaho — John Harris of Weiser is a very proud "girl dad." He has two beautiful daughters,14-year-old Kaylee and 5-year-old Danni, and feels being a dad is his greatest joy.

"It means everything in the entire world, you know? Having children changed my entire life," Harris said. "When you have kids, it's just something different"

In May, Harris noticed something was not quite right with his youngest daughter Danni.

"We went to a t-ball game and I noticed it took her a couple of times to hit a ball off a tee. That isn't like her," he said. "The next day she slept all day, and then I  noticed that her eye was not tracking like it should, so we took her in."

The news was not good. Doctors found an extremely rare tumor, known as a germ cell tumor, in Danni's brain. The tumor is also entangled with her eye.

While the tumor itself is exceptionally rare, it is even rarer for it to be cancerous and found in a female.

"Surgery is not an option so we're going to do lots of chemo," Harris said. "We are at St. Luke's and they are fantastic there. We go every Friday to the hospital to check her counts to make sure she is okay and then we go every three weeks for chemo."

As Danni is battling this extremely rare diagnosis, she is also coping with the death of her mother Trish Harris, who passed away suddenly in August 2020 after having routine surgery. She was just 34 years old.

Harris said his wife's daughters were her world, and they are still grieving the devastating and unexpected loss. Danni's diagnosis has made things even more painful.

"In the hospital you are little and you're scared, and she just lost her mom so she associates the hospital with death," Harris said. "The lady at the hospital asked her if she had any questions for her, and she said, 'Am I going to die?' It took all the air out of the room at that point in time."

The Harris family lives in Weiser, a small Idaho town with a big heart. The community has been rallying around Danni and her family in amazing ways.

"I don't know how I could do what I'm doing if I didn't live in Weiser, it's just an amazing community," Harris said. "They did a benefit for her on June 5 here in town and they raised a bunch of money for her, and they just love her."

The spaghetti dinner and auction fundraiser at Legends on Main attracted people from all over the area. Supporters donated money, gift baskets and anything they could to help. Community members then dropped off the money made to the family. It meant the world to Harris.

With chemotherapy treatments in full swing, Danni started losing her long blonde hair this month, which was incredibly difficult for her.

"She told me, 'Dad, I just don't know who will take me to prom with my hair like this,'" Harris said tearfully. "I said, 'Honey, you are fine.'"

Beck's Barber Shop in Weiser hosted a free head-shaving day so people in the community could shave their heads in support of Danni. She was able to be there to get her head shaved along with her dad and big sister.

"I just want to say thank you, Weiser, I love you, Weiser," Harris said. "I greatly appreciate everything you have done for us."

My #7sHero tonight will steal your heart. She definitely stole mine.

This is Danni Harris, 5, of Weiser. She’s battling a rare brain tumor, & she plans to kick cancer’s butt!

I’ll tell you how her community is rallying around her, & how YOU can help. @KTVB ❤️#DanniStrong pic.twitter.com/XISbRWTsTu

"Thanks, Weiser for helping me and my daddy," Danni said in a video from her hospital bed. "I love you."

Harris has big dreams for his precious 5-year-old girl.

Harris said Danni is his hero.

"You know she tries to keep us calm, she tells me and her sister, you know, 'I'm going to be okay,'" Harris said. "I know life isn't fair, but this little girl has to be alright."

The next #DanniStrong community fundraisers are coming up this weekend. The Dash for Danni is Saturday, June 26. The 5k walk, skip or run kicks off first thing in the morning at the Weiser River Music Festival venue on Highway 95. The fun starts at 8 a.m.

Credit: #DanniStrong
The Dash for Danni is being held Saturday, June 26th in Weiser.

There's also a motorcycle ride for Danni on Saturday, June 26. Bikers can meet at Copper Lounge at 10 a.m. at 10:30 a.m., then ride through town before the Parade to Danni's house to buy lemonade and make donations.

You can also buy a t-shirt to support Danni.

If would like to help with a donation, there is also a GO FUND ME page for the family.