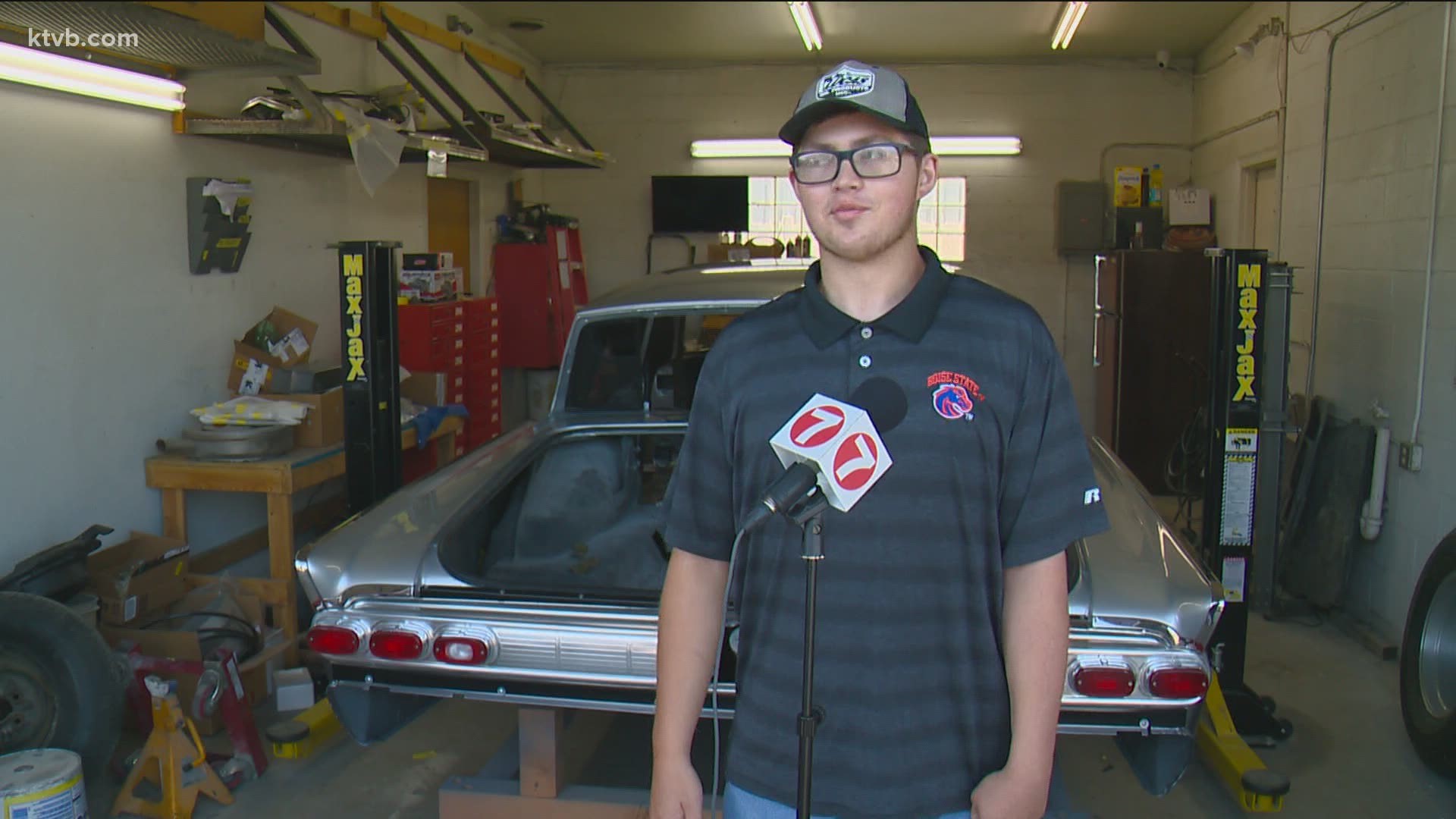 PARMA, Idaho — Fifteen-year-old Cole Medcoff of Parma is battling a brain tumor, during a pandemic. It's not something this teenager and Parma High School student thought he'd be doing during his high school years.

When he first started to feel symptoms, he said he and his parents went searching for answers.

"It was a long string of just seeing doctor after doctor," Cole told KTVB.

The answer they did get was a tough pill to swallow. It was a brain tumor. Cole has been in cancer treatment since 2019. His dad says he has been so brave through it all.

"The chemo the last few months, the last four months, has really started to get to him," Josh Medcoff, Cole's dad, said. "I think it wears on him more than he likes to show. He stays strong for myself and for his mother and for the other little kids at the hospital, and for everybody around him. Just seeing the pain and everything he goes through with this, it's really tough. As a parent you want to fix everything, take care of it, take away the pain kiss the boo-boo and you can't."

Months ago, before the pandemic hit, Cole fell in love with the idea of buying a classic car. He said bringing a car back to life just seemed like the perfect thing to spend his extra time on.

"I just kept looking on Craigslist, on Facebook, for something I could drive, I could work on," Cole said.

He found a classic 1964 Mercury Monterey.

Scott Reynolds at Harold's Auto Body in Boise wanted to help fix up the car for Cole.

"What do you do when you find that out, that your best buddy's son has a brain tumor?" Reynolds told KTVB.

The problem was, getting the money to do it. Reynolds asked Cole if they could go to Make-A-Wish Idaho and ask for help. Cole refused.

"He said I'm not going to do it. He's not one to take charity, he's very selfless," Reynolds said. "He said every week, 'I go to chemo, and I see these little kids with tubes plugged in, and no hair, and they are throwing up and sick, and their families are suffering with them.' He told me, 'I don't need a car, those kids need to go to Disneyland, they need to go to Hawaii, they need their wish worse than I need a car.'"

So, Reynolds came up with an idea to bring in car shops from all over the Treasure Valley to help with restoring Cole's dream car.

"I got with my shop's owner, made some key calls to people in town, all the big players, and we had a meeting," Reynolds explained. "Can we do this? We all said, 'Yeah, we can do this for this kid.'"

Cole said he just couldn't believe it when he heard the news.

"My dad walks in and said, 'I talked to Scott, looks like he's picking up your car tomorrow,'" Cole recalled. "He said, 'They are going to do a full restoration on it.'"

Reynolds told KTVB that the rebuild and restoration started in February, then COVID-19 slowed things down. But, he and his amazing group of volunteers have been dedicated to the project for months.

"My guys around here have just been amazing, thousands of hours of sacrifice," said Reynolds. "How often do you get the chance to change someone's life, and this is life-changing? It's worth it for all of us. It's a lot of hours, a lot of time, a lot of money, but why not?"

This classic car even has "her" own Facebook page.

"Maria Monterey the Legend, is what it's called," Reynolds said.

He posts weekly to update people on the car's progress, and requests donations for this passion project.

"This has all been funded by donations," Reynolds said. "When money is donated we can round up enough money to buy the next set of parts that we need."

He added that people have donated from all over the country, and it's all for Cole.

"You don't see a kid that's selfless anymore," Reynolds told KTVB. "I see him go to chemo, what a way to spend a summer, chemotherapy is horrible. You see him fighting, and he's never asked for anything. Hell, if I can give him a dream and make him feel a little better about his tumor, that's what I'm here for."

Cole still has months of cancer treatment left, but he's keeping a positive attitude. His motto is, "Keep calm, it's just a brain tumor."

Reynolds said they hope to deliver the finished car to Cole in September. But, they still have work to do.

If you'd like to help this team of volunteers finishes up a dream car for Cole, reach out to Scott Reynolds through the car's Facebook page. A GoFundMe has been set up, and raffle tickets can be purchased through Facebook, at Harold's Auto Body, or any AAMCO location.

Here is a list of those who volunteered or donated: