Torres will represent the state of Idaho and the U.S. Army at Miss America in 2021. She will no doubt be a role model for women and girls all over the country. 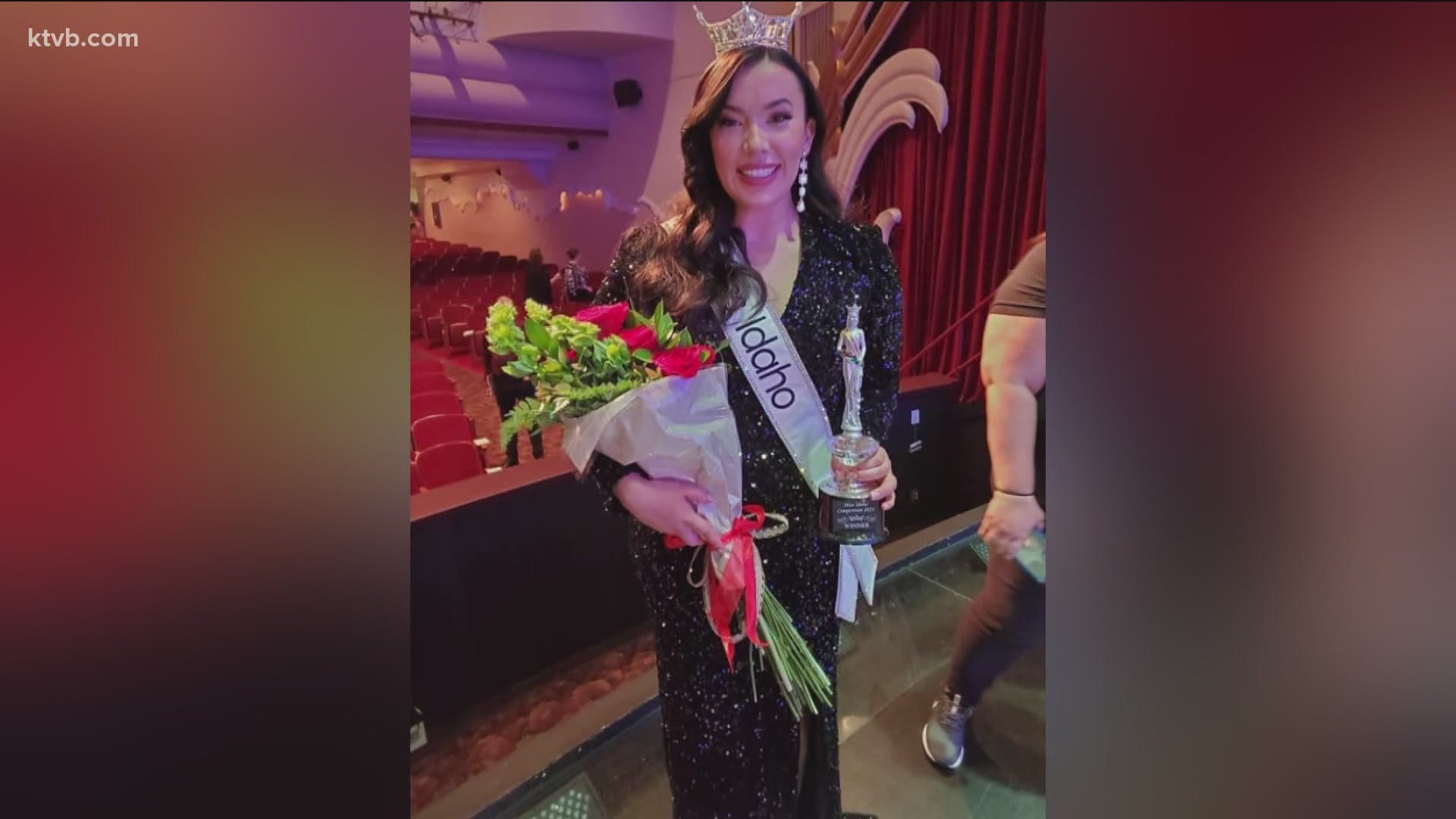 BOISE, Idaho — Ayriss Torres, a woman from Eastern Idaho, competed in the Miss Idaho pageant as Miss Bonneville County in June. Ultimately, Torres was crowned Miss Idaho and is set to represent the Gem State at the Miss American pageant in December.

"I really am an Idaho girl," Torres told KTVB. "I was born and raised right in the same community that I still am from. I absolutely love the mountains, I love to hike and fish, and I love the people."

The born-and-raised Idahoan said winning the title of Miss Idaho was a dream come true.

"I had such an overwhelming sense of community, and so much love and support behind me," she said. "I didn't have any expectations of winning, honestly."

Not only is Torres going to represent Idaho on the main stage in December, but she'll also be representing the United States Army.

In addition to studying political science, pre-law and finance at Idaho State University (ISU), Torres is a reservist in the Army. She enlisted two years ago at the age of 19.

Reservists are stationed near their homes and only deployed to international stations if they are called for active duty. This allows them to continue their career or education while training close to home.

"I am a Civil Affairs Specialist, I'm a 38 Bravo, that is my [military occupational specialty]," Torres explained. "If I were to be deployed, my role would be to coordinate humanitarian efforts and work as a liaison between the United States and foreign nations, after war, or national disaster. I get to be the person who goes to those communities and talks to them about what they need and what the U.S. can do for them, and how we can coordinate getting relief to a specific area or community."

Serving in the Army means so much to Torres.

"The value of service and the value of giving my life for someone, that is completely what my motto is from here on out," she said.

This year's Miss America pageant will include two other women who serve in the military, which is very rare.

"I've never known anyone to win a state title while they were actively serving, until a week before I was crowned, when Miss District of Columbia and Miss Colorado were also crowned," Torres said. "They are also both actively serving in the military right now. I think that is so amazing, I think it's the year of the military woman. We are going to do amazing things and show how much we love and care for our country."

Torres will carefully prepare for Miss America so that she is 100% ready to compete, and the Army is ready to help in any way possible. However, she said her priorities are very clear.

"The military does come first, and we are coming up on a big training here and we're focused on training and getting through that, and then I know they are going to give me so much support when I go to Miss America," Torres said. "I would love to be in the top 15, but honestly the sky is the limit with such an amazing community behind me."

Torres is very passionate about human rights, and helping Idaho communities close gender, racial, and generational wealth gaps through her organization, The Equity Project. She's looking forward to bringing her passion to the national stage at Miss America.

"I just think it's amazing to be a part of the 100th anniversary of Miss America," Torres said. "Going through that experience really is once in a lifetime."

Torres is also very dedicated to our vets, and she is very excited to announce a new post for the American Veterans Association at ISU. Torres will be the post commander, and she can't wait to start working to help our veterans.

This is Ayriss Torres. She is the newly crowned Miss Idaho, and she's also an active member of the U.S. Army. She will compete at Miss America in December, and will no doubt inspire girls and women all over the country! She's our #7sHERO tonight. @KTVB pic.twitter.com/NP8QdnQ9BX

Ayriss began dancing at The Dance Factory when she was 15 months old, and danced pre-professionally in jazz, hip hop, clogging, ballet, tap, and musical theater- holding national dance titles throughout multiple convention systems. Ayriss was also chosen to represent Idaho in the Dance Across the USA Book, depicting dancers modeling in National Parks in each state.

Ayriss attended Grace Lutheran School in Pocatello through the 7th grade, and then went to Alameda Middle School. Ayriss also attended Highland High School, and was a part of the National Society of High School Scholars. Ayriss received the Presidential Academic Award and was an Idaho State Journal Academic Allstar. Ayriss obtained her GED at 18 and began working in Pocatello.

While a part of the Miss America Organization, Ayriss has been an ambassador for the Children's Miracle Network Hospitals, Pocatello Kind Community Organization, Forward Edge Humanitarian, and the American Veterans Association.

Ayriss enlisted in the US Army at age 19 as a 38B Civil Affairs Specialist, obtaining an advanced rank promotion in Basic Training, as well as another advanced promotion in MOS school, graduating from the JFK Special Warfare Center & School on the Commandant's list. Ayriss currently attends Idaho State University and is studying Political Science/Pre-Law and Finance, and holds her position on the College of Arts & Letters Dean's List.

Ayriss is also a Consumer Loan Officer at Idaho Central Credit Union, and is very passionate about financial instruction and helping Idaho communities close gender, racial, and generational wealth gaps through her organization, The Equity Project.