49-year-old Jeff Robbins contracted COVID-19 in July. Within a matter of days he was hospitalized and put on a ventilator. He calls his recovery a miracle. 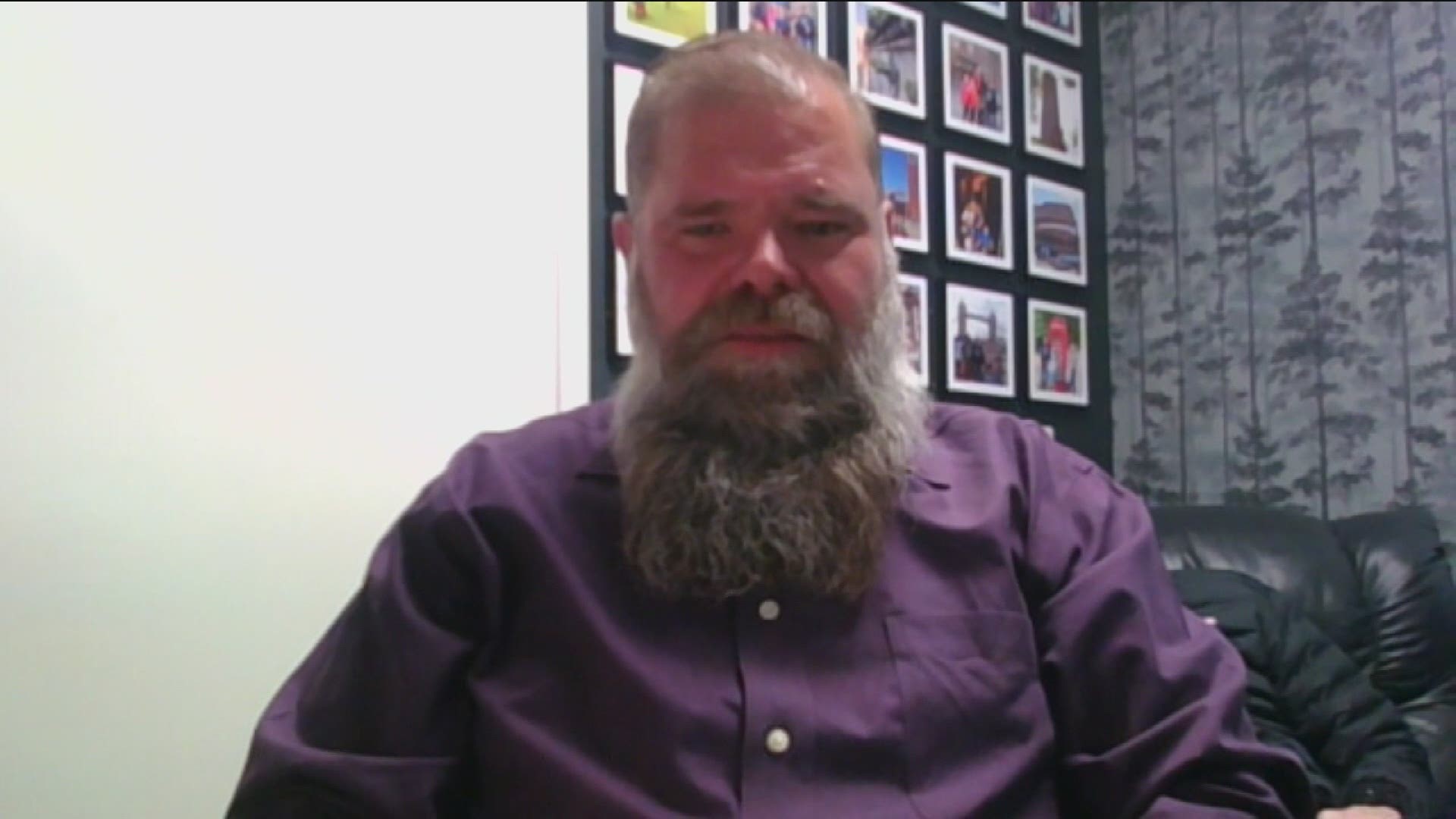 BOISE, Idaho — 49-year-old Jeff Robbins is a nurse practitioner in the Treasure Valley. In July 2020, he was practicing in Caldwell when he contracted COVID-19.

Robbins believes he contracted the virus at work.

"I was working nearly 90 hours a week between seeing patients and charting," he said. "I do know that several other providers where I was working got it as well."

In a matter of days, the husband and father of four became critically ill. He became so ill he was admitted to the hospital and put on a ventilator.

"I don't remember a whole lot getting sick. I just remember I had chest pain and couldn't breathe, and my wife talked me into going to the emergency department," Robbins said. "I was at 80% oxygen, my kidneys and liver were failing and my heart was irregular, and then they inutbated me the next day.

Robbins' wife Dawnell and their four children were unable to visit him, so they depended on his medical team at St. Luke's for updates. Robbin's wife kept family, friends and his patients updated on Facebook.

"It was really tough on my family because it was day-to-day," he said.

After several days, Robbins' condition began to improve. Within a matter of days he was able to breathe on his own and was taken off the ventilator.

He called his recovery a miracle.

When Robbins felt well enough, he read his wife's Facebook posts and the dozens of comments from his patients. He was blown away.

"When I read those comments, it just made me cry because I couldn't believe that they felt so much love and concern about me and they were praying for me," Robbins said. "They are like my family."

His recovery wasn't easy. It took him several weeks to get strong again.

"It was a lot tougher than I thought. I lost 40 pounds when I was in the hospital. Since I had the tube down my throat from being intubated it was hard to swallow. I couldn't eat very well, my throat burned all the time," Robbins said. "Then I found I couldn't walk, and then my brain wasn't working right. I couldn't do math in my head like I normally do, so they had me doing inpatient rehab for a week and then almost two months of outpatient rehab. I found myself getting better every day, but it was frustrating because I just wanted to get back to work."

After dealing with COVID-19 in a personal capacity, Robbins is urging Idahoans to continue taking the illness seriously.

"It is real," he said. "But people shouldn't be scared of it either, they need to live their lives but take precautions. I think masks are really important, but I don't think it's the only thing that's going to prevent you from getting it. You need to be smart, wash your hands and social distance."

The recent trends of the virus are a concern for Robbins.

"I know the numbers are spiking everywhere," he said. "There's no rhyme or reason to this virus, sometimes it attacks some people different than it does others. It's tough."

The tragic death of fellow nurse practitioner Samantha Hickey, who passed away due to COVID-19 complications just one week before Robbins was hospitalized, is something he thinks about often. She was just 46 years old and left behind her husband and four children.

"I thought 'Why was she taken, but I was allowed to be here?' My heart goes out to their family and friends and all her patients because they lost her, and I was lucky enough to be able to come back," Robbins said. "I don't know why that was the way it was, but I'm grateful to be here and I'm just going to take the time I have left here to bless my patients. and take good care of them."

Tonight at 10pm on @KTVB, local Nurse Practitioner Jeff Robbins shares his battle with COVID-19. The 49-year-old contracted the virus in July, & was hospitalized and put on a ventilator in a matter of days. He credits his medical team at @StLukesHealth for his survival. #7sHero pic.twitter.com/LaNc8mZmiM

Robbins went back to work in late October at a new clinic in Meridian.

"It feels awesome, I'm at Morgan Family Practice," he said. "All my patients are starting to come back to me and it feels like a family reunion because I love them like I love my family."

He's been making up for lost time with his family at home, too. His kids know how lucky they are to have their dad home and healthy again.

"We have a 22-year-old daughter in college, an 18-year-old son in college, a 15-year-old son in high school and an 8-year-old in 3rd grade. I am spending time with each of them, my 8-year old has been glued to my hip ever since I got out," Robbins said. "You don't realize what you have until it's gone, or could be gone."

Robbins wants to thank all the healthcare heroes who helped him through his battle with COVID-19.

"I just want to say I'm so grateful for the medical care that I got, St Luke's, St. Al's, they are so amazing. They saved my life. I also attribute it to God because I believe in God. I believe in miracles." he said. "I thank everybody for praying for me."