Archie Hollenbeck has ALS and he sold his home to move into a care facility. He donated the profits to help veterans in need. 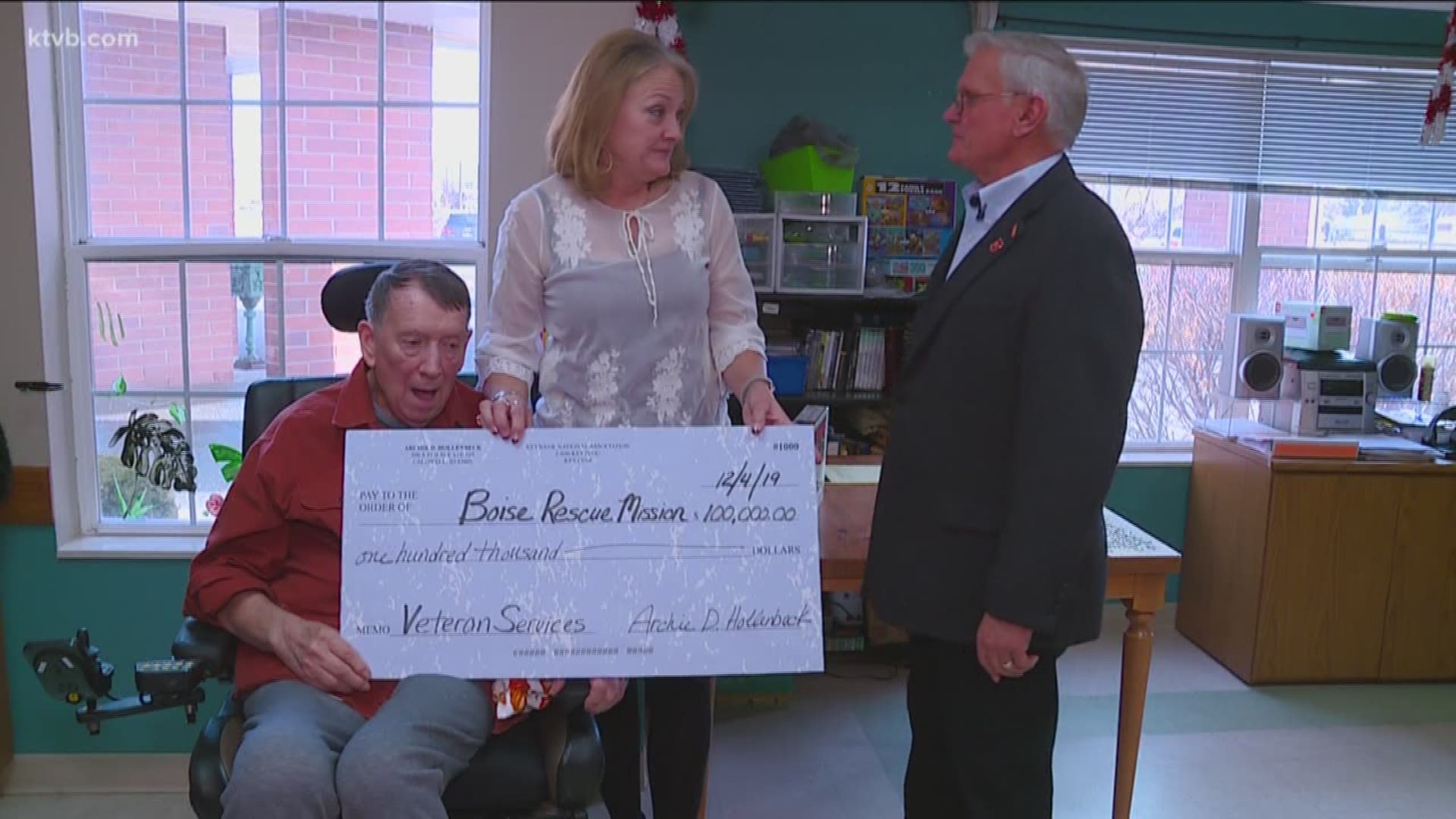 Army veteran Archie Hollenbeck has ALS and when his symptoms worsened, he was forced to sell his home. He now lives at Wellspring Health and Rehabilitation in Nampa where he gets 24-hour care.

“Unfortunately, it was just too hard for him to remain at home, and so he's in one of the best places ever,” said Patti Syme, a dear friend who is more like family to Hollenbeck. “This is his family and they all love on him, they dote on him, everybody waves to him, he has the girls totally bamboozled here!”

Syme started out as Hollenbeck’s realtor, she helped him buy and sell his home. That relationship turned into so much more. She is now just like a daughter to him. Hollenbeck never had children of his own, and his wonderful wife passed away several years ago.

“I just remained in contact with him, and I would come to visit him,” she said. “You know, I'm not sure who adopted who? He’s a blessing, my parents are both gone and so he has been a blessing in my husband's and my life, he's just a wonderful man.”

ALS has taken Hollenbeck’s voice and his ability to walk, but not his sense of humor, his spirit or his heart. He uses his iPad or a notepad to communicate. He spends his time playing cards, working on puzzles, and he likes to keep a drawer full of candy in his room to spoil the staff at Wellspring.

“Everybody that knows him falls in love with him,” Syme said. “His smile is infectious.”

RELATED: Boise family with 18 children is battling a devastating diagnosis and leaning on their faith

Hollenbeck made a big decision this holiday season, one that no one saw coming.

“You know he's not a man of wealth, but he was left with a large chunk of money after selling his home,” Syme said. “He had talked about charities. He's really passionate about being a veteran.”

Syme introduced him to Bill Roscoe from the Boise Rescue Mission. The mission has a program that helps homeless veterans get back on their feet.

“Bill does so much to help veterans in our area,” Syme said.

Hollenbeck told Roscoe he wanted to donate a whopping $100,000 to help homeless veterans. Roscoe was blown away.

“I'm overwhelmed. Frankly, we don't see a lot of gifts of that size any time of the year, and this time of year it's even more special,” Roscoe said.

Earlier in December, KTVB was there at Hollenbeck’s nursing facility when he presented the big check for $100,000. It was an emotional moment for everyone, especially for Roscoe, who is also a proud Army veteran.

“We have a lot of veterans in the house, and we're seeing some great success with of the veterans, these funds will just continue that success in the next group of veterans coming in the door,” Roscoe said. “Whether it be today or six months from now, that kind of money is going to keep us moving forward."

RELATED: Boise businessman helps family of 18 get the home renovations needed for father with terminal disease