A local veteran needed a safe wheelchair ramp at his home. Neighbors reached out to the Nampa Fire Department and they stepped in to build the ramp. 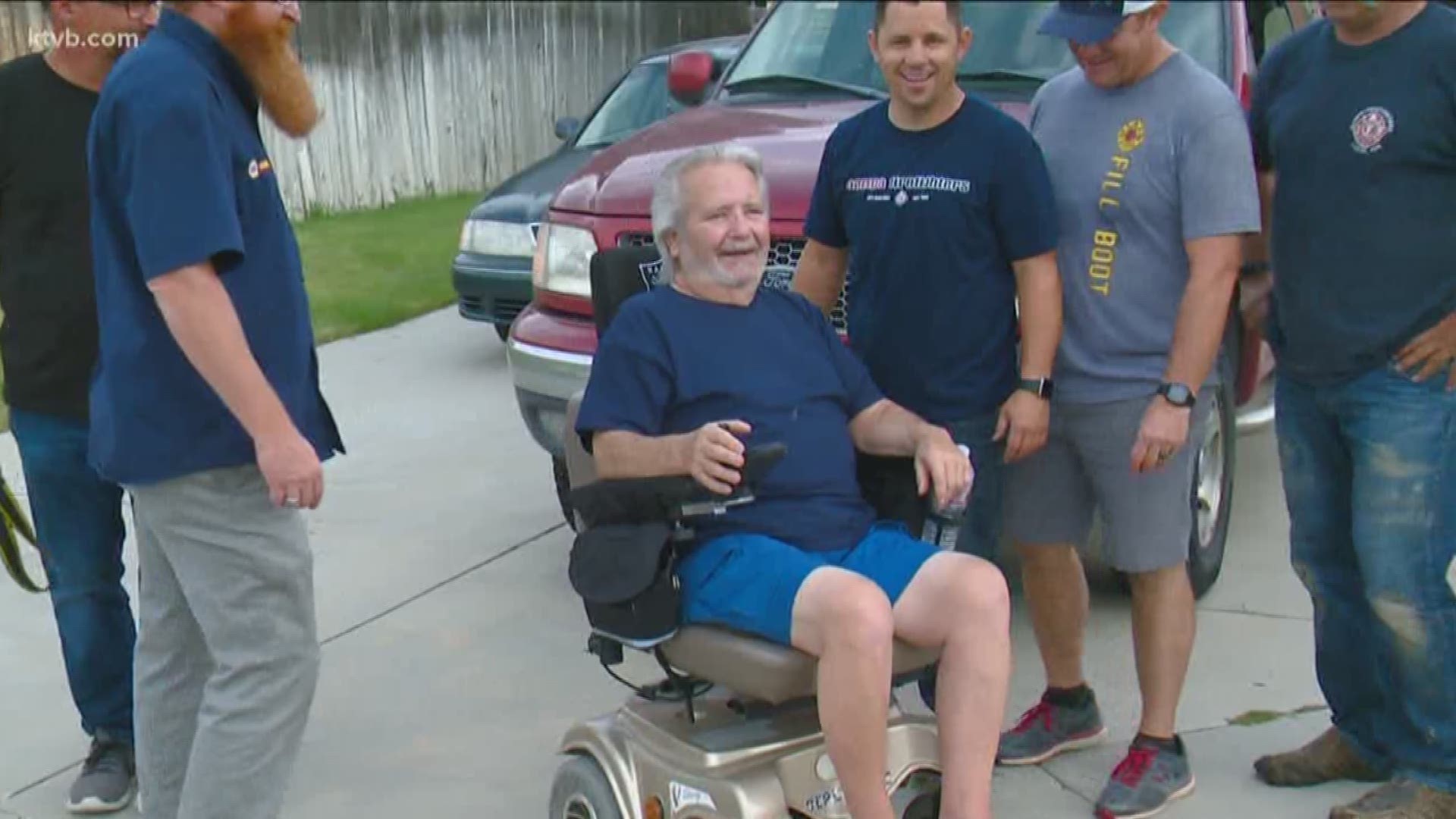 NAMPA, Idaho — Dewey Treat has lived in Nampa for several years now, and he says his neighborhood is something special. His neighbors are like family.

“All of us in this neighborhood know each other on a first name basis. When one of us has a problem, we all have a problem and everyone just pitches in,”  Treat said.

Treat is a proud veteran, and these days he uses a power chair to get around.

“I can still hobble around on a cane but it's going downhill,” said Treat

His neighbors, Reed Pacheco and Ben Houston, noticed that getting in and out of the house was proving to be a challenge for Treat.

“I moved into this neighborhood ten years ago, and I have known Dewey since then,” Houston said. “I care about him.”

He needed a safer wheelchair ramp. They were worried and wanted to step in and do something.

“We heard about Dewey just not being safe, and being a disabled veteran, we wanted to get him help,” Pacheco said.

Pacheco reached out to the Nampa Fire Department asking for ideas or resources to get the ramp built. They responded with more than that.

RELATED: Praynksters surprise Boise woman and her father in need

“My friend Reed knocked on my door one afternoon and he says if a couple of guys come by to look at your ramp, don't run them off. I said, 'What are they coming for?' He said just to check it out and be sure it's safe,” Treat explained.

Soon after, the Nampa Fire Department showed up at Treat’s house.

“They came and looked at it, and the next day seven Nampa firemen showed up with a hook and ladder truck, a pickup load of material, and three hours later I had a new ramp,” Treat said. “What do you say? It was very humbling.”

Treat told us he was brought to tears. He couldn’t believe the generosity of the firefighters.

“I just was overwhelmed, hard not to get teary-eyed, you know,” he said.

Jake Fuhriman of the Nampa Fire Department said it was easy to get NFD volunteers to help build a safe wheelchair ramp for a veteran in their community.

“We just got the guys together to do it and the first day we were here we had maybe ten guys working, and today we’re just finishing up,” Fuhriman said. “Today we are off duty, we just got off this morning from our 48-hour shift and we thought we would do this on our way home.”

At first, the firefighters planned on using their own money but Nampa Fire stepped in.

“They were able to support us financially in doing this, which we are grateful for,” Fuhriman said. “We took the old ramp out and we built a whole new ramp.”

Treat says the ramp is going to make his life so much easier.

“It's hard to explain unless you are confined to one of these things, how much it means,” Treat mentioned. “How can you say thank you?”

This veteran is so grateful to the Nampa Fire Department, and to his neighbors for reaching out for help.

“To think that you'd have neighbors that care about you and would do that for you," he said.