Jessie Levin and Whitney Mestelle put the vigil together in two days and want to say thank you to Idaho for listening, learning, and wanting to make change. 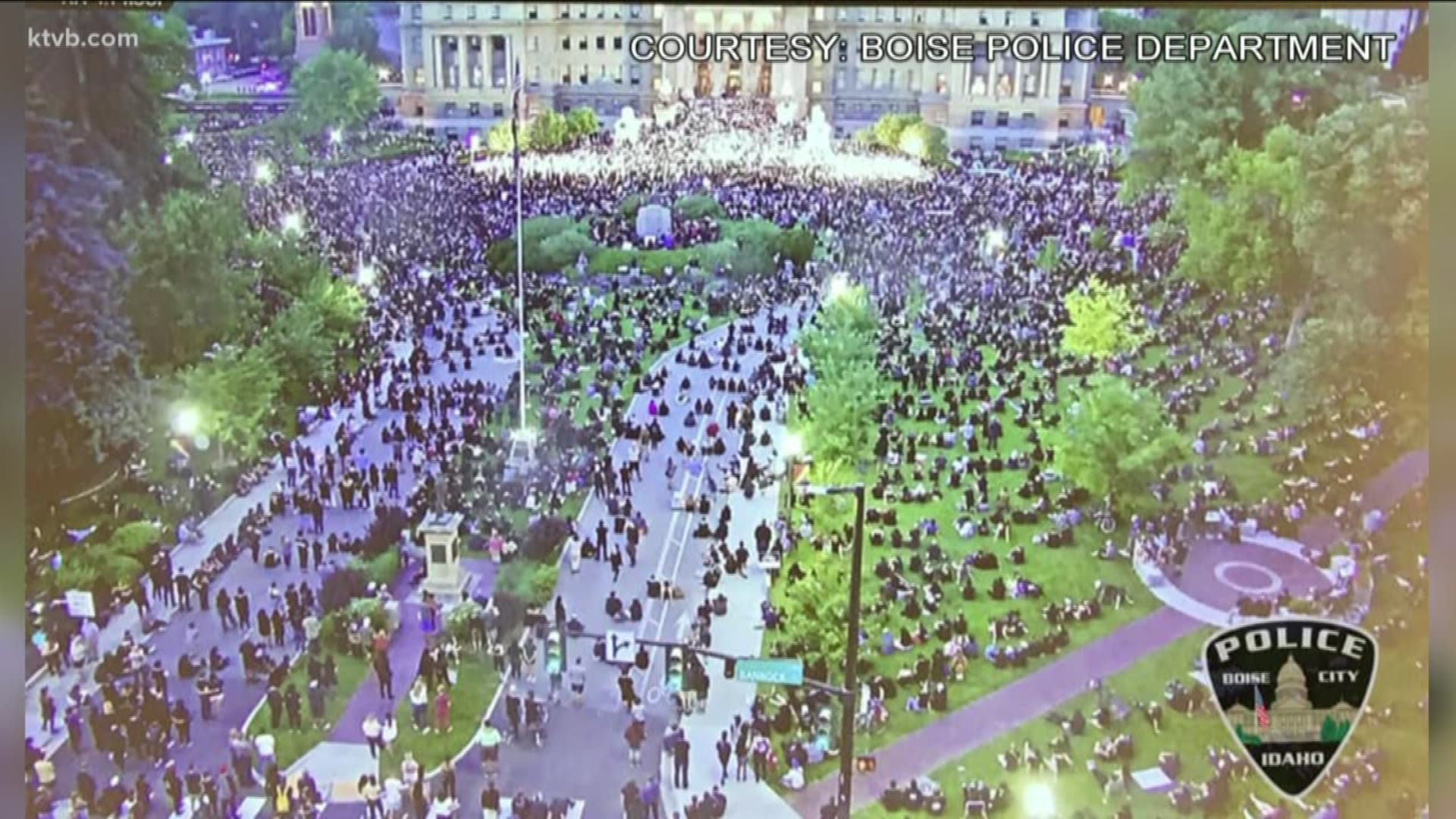 BOISE, Idaho — Tuesday night's peaceful Black Lives Matter Vigil in Boise was a huge success and an inspiration to the thousands of people who were there. The Boise Police Department estimate over 5,000 people attended. It was a night of people truly coming together in support of the Treasure Valley's black community.

Jessie Levin and Whitney Mestelle are the women who organized the vigil and were blown away by the turnout.

“I could just see the hundreds of people walking in, it was overwhelming, it was very overwhelming in a great way,” Mestelle said. “Idaho definitely showed up.”

It was incredible for these women to see so many people in the crowd. They put the event together in just over 48 hours. Levin told KTVB that she was devastated over the death of George Floyd, and that left her with so many feelings. Feelings she didn’t want to deal with alone.

“Last week, I was feeling so many emotions about everything that was happening, I almost broke down crying in my car, and it just didn't feel right to be mourning alone,” she said. “So, I had called Whitney and pitched this idea to her. Then we sat down Sunday, hacked out some ideas, and it just got big, it got huge.”

Mestelle said the number one priority for the gathering was that it was peaceful.

“We didn't want it to be a protest or a rally, so how do we make that happen? We knew it was going to be difficult with what's going on around the country,” Mestelle explained.

Once the word got out about this peaceful vigil, many volunteers joined the cause. Then, it was full speed ahead.

Tuesday evening, the crowds started showing up. The night honoring George Floyd, and other black lives unjustly taken, went off without a hitch. Speakers shared their personal stories, in hopes of educating the masses about racial inequality in America.

MORE: 'My city standing with me,' Boise man proud to take part in peaceful vigil

“I was just so thankful to be heard, to feel like Idaho and the people of Boise and this community were ready to listen to people of color,” said Mestelle. “They are definitely willing to impact change in their circles and in their community.”

The organizers and volunteers want to thank the people who took the time to come, listen, and learn. The vigil stayed peaceful, respectful, and calm.

“I am just really grateful that Boise showed up in a way that other cities have not been able to do. Immensely grateful for that, so thank you,” Mestelle said. “We saw them and we heard them and we feel that Boise and Idaho are with us in wanting to make impactful change.”

So, what’s next? Levin and Mestelle want to keep this positive momentum going.

“I want to encourage people to dig deep and not be afraid of having these hard conversations,” said Levin.

Credit: Joe Parris
Thousands gathered at the Idaho State Capitol Building on Tuesday night for a vigil for George Floyd, who died last week in Minneapolis.

Mestelle said conversations about race and equality in Idaho are key. She plans to meet with community members and leaders who want to make an impactful change.

“We want to make sure that people of color in this community feel more welcome, and more heard, and receive less bias,” she said. “I'm proud of Boise, I'm inspired. and I'm looking towards a peaceful future with which we can affect peaceful and meaningful change.”

There’s something else that people can do to help the cause. Search for Inclusive Idaho on social media, and get involved. It’s in the beginning stages, but it's a brand new organization focused on making Idaho more inclusive for everyone.