Max Sandmeyer listens to the anthem at Gowen Field every day. When the Idaho National Guard heard about his patriotism, they invited him to base for the ceremony. 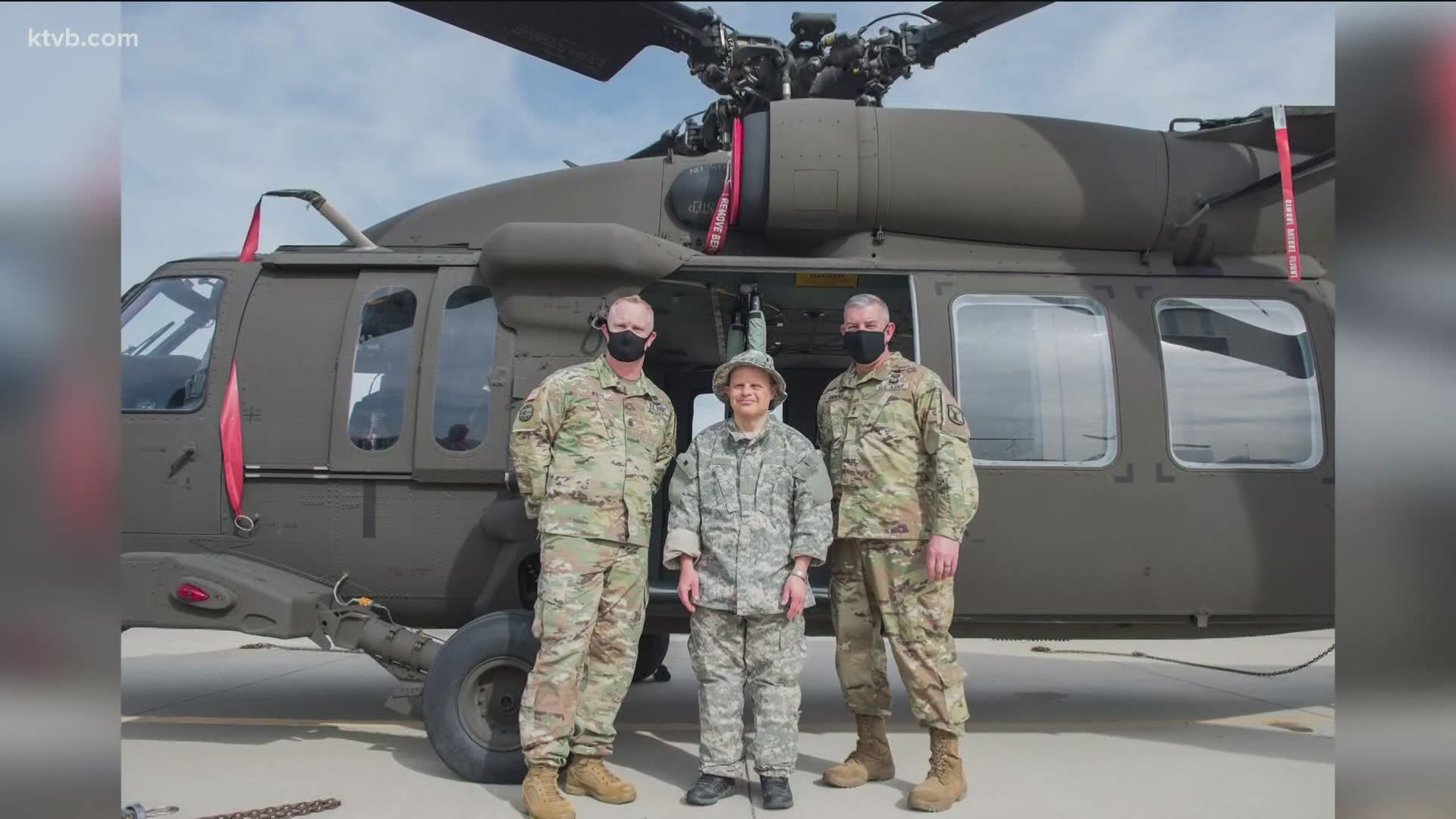 BOISE, Idaho — For 55-year-old Max Sandmeyer of Boise, 5 p.m. is the best time of the day. That's when he walks out to his backyard, puts his hand on his heart, and listens to the United States National Anthem as it plays over the loudspeakers at Gowen Field.

He lives about a mile away from Gowen Field and looks forward to hearing it in the distance every day.

Max Sandmeyer grew up in a big family and is very close to his siblings. His mom, the light of his life, sadly passed away last summer, and he moved in with his older brother Nick shortly after. They shared a room together growing up, so his brother and sister-in-law were thrilled to welcome him into their home.

Max's family always knew he was something special, according to his older brother, Steve Sandmeyer.

"Max has Down syndrome, which normally would be considered a mental disability, but what's unique about Max is he expresses a really unique ability to understand what's important," Steve Sandmeyer said. "He is very dedicated to those who serve the military, the police, the fire department. Max himself serves to the best of his ability. He knits hats for homeless children and we donate them to local shelters."

Max loves being a part of the community and giving back. When he moved in with his brother, he noticed something special about his new home.

"Max is very patriotic, and every evening at 5 p.m., the National Guard has a flag ceremony out at their base that he's been able to hear from the base all the way to the house," Steve Sandmeyer said. "Max sets his alarm for 4:50 [and] we aren't allowed to travel anywhere from the house as it nears 5 p.m. Max will stand in the backyard and wait for the ceremony to begin. He will place his hand on his heart and listen to the National Anthem."

Max, wearing a red, white and blue button-down shirt during his interview with KTVB, proudly told us about his daily ritual.

"I set the alarm, and go out every night. I need to be here on time," Max Sandmeyer said.

As winter turned to spring, however, the anthem was harder to hear, as a change in weather can affect sound quality.  Max asked his brothers if they could do something to fix it.

"So I called the National Guard and I said, 'Have you guys turned it down? Can you turn it up? My brother Max can't hear it anymore,'" Steve Sandmeyer said with a chuckle. "Through a chain of events, I got a call from General Michael Garshak. He invited us to come to the base, and we were very honored and excited to be able to do that."

Max was so excited for the adventure ahead. Before he knew it, he was on the base with his brother as guests of the Idaho National Guard, Major General Michael Garshak, and Command Sargeant Major Scott White.

"He was really excited to be here. He showed up, he had his full military uniform on. He was ready for the day," White said. "So we brought him out and did a tour of Gowen Field. He got to see some A-10s and Blackhawks, we took a picture of him there. We talked to him about the history of this military tradition."

Max was able to take part in the ceremony with them. You could just see how proud he was to be there, and his brothers were truly touched by this gesture from Gen. Garshak and his team.

#7sHero Max Sandmeyer waits for the National Anthem to be played over the loud speakers at Gowen Field daily - with his hand over his heart. He can hear it in his yard. Thanks to the Idaho National Guard, Max had the chance to go see this special ceremony in person. @KTVB at 10. pic.twitter.com/3j7sTztCES

"I can only imagine how busy the General is," Steve Sandmeyer said. "For him to recognize Max's dedication as a patriot, that was something."

The whole experience is one that Max will never forget. The military is so close to his heart.

"To have the chance to actually be there with people who serve the country, who he lives vicariously through, that was huge for him to be there," Nick Sandmeyer said. "I was just giddy for him."

The Sandmeyer family wants to say thank you to the Idaho National Guard for making Max's dream come true.