Jessie Severns, 17, was diagnosed with leukemia in 2019. After almost three years, she rang the bell in front of friends, family and the heroes who saved her life. 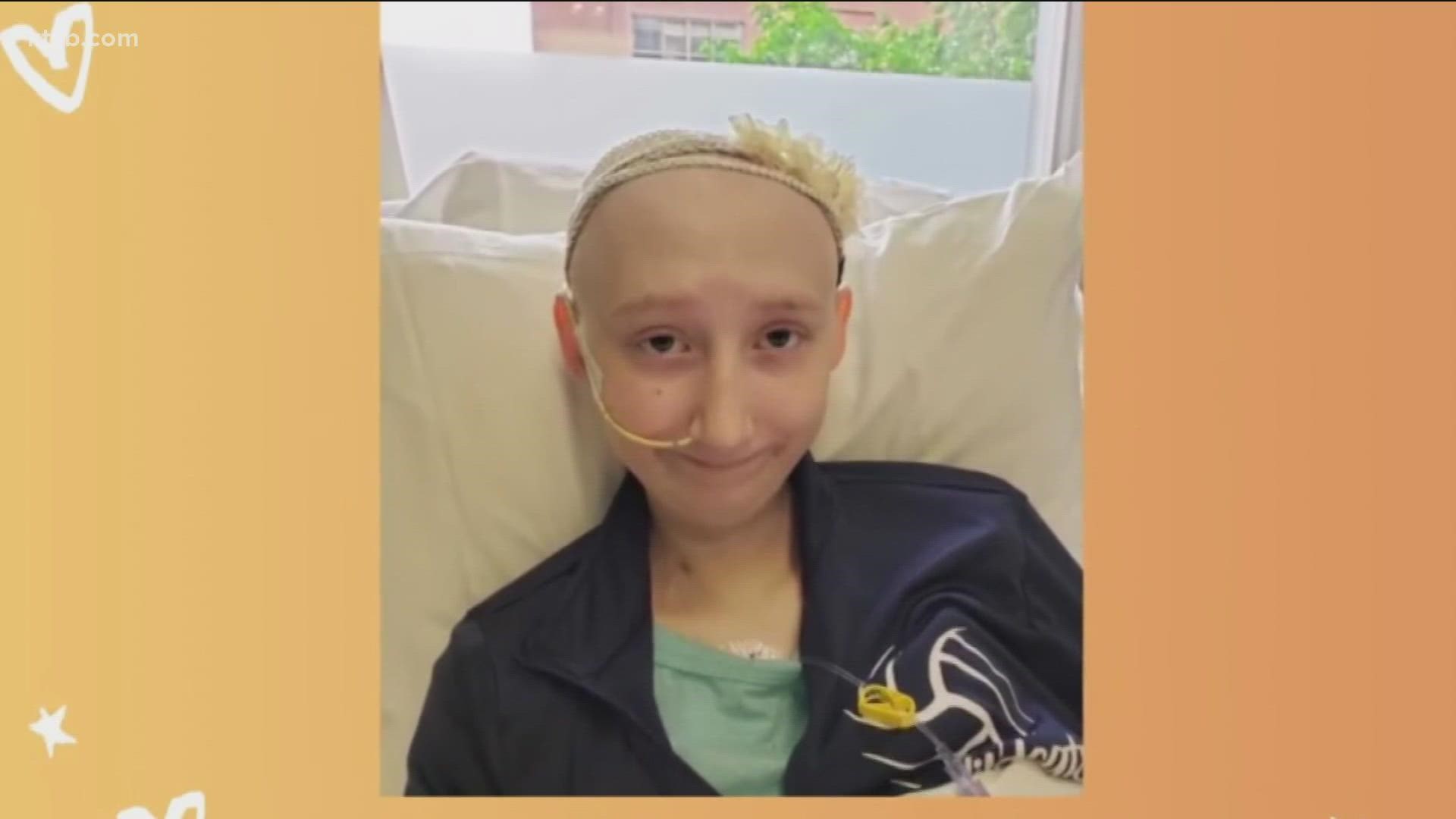 BOISE, Idaho — After a three-year battle with leukemia, a Boise teenager is celebrating her victory against cancer by ringing the bell at the hospital she was treated at.

Jessie Severns was just 14 years old when she was diagnosed with t-cell acute lymphoblastic leukemia in February 2019. Her doctor saw the signs of cancer right away.

"It was scary finding out that I had cancer, I thought it was the flu," Severns said. "I was like, 'Okay, now I have to get through this obstacle.'"

Her mom, Jennifer Callahan, was stunned. Jessie had little red spots all over her body, a sign of leukemia.

"In just a few minutes of arriving, her pediatrician sat next to me and said, 'I'm not going to sugar coat this, this is cancer and we're going to start treatment right away,'" Callahan said. "It was at that moment that I realized that I can't cry. I can't let my daughter see me scared."

Three years later, Jessie is now 17-years-old. It has been a long and painful battle that has included more than two years of chemotherapy.

Since her diagnosis, Severns's life has been dedicated to surviving.

"Most of the chemo that I had felt like fire in my veins. Not being able to go outside as much, constantly throwing up, not being able to hold down food," she explained. "Having to get 11 feeding tubes, constant headaches, very nauseous. I didn't want to eat and mostly slept a lot."

RELATED: Jessie’s Journey: Boise mom shares the raw and painful reality of raising a child who is battling cancer

Over the last three years, Severns lost weight, lost her hair and experienced several other side effects of her chemotherapy. Her family was constantly worried about her, her mom told us childhood cancer really does impact the whole family.

"Cancer sucks," Callahan said. "There's just no other way to say it."

Severns met many fellow warriors along the way at St. Luke's Children's Hospital. Some were teenagers like her, others were even younger patients. They were all a part of a club none of them wanted to be in, but they supported each other through it. Their families became close friends.

Sadly, many of those young warriors didn't make it. That was, and still is, the hardest part of all of this for Severns and her mother.

"We have lost a lot of friends, a lot of dear friends to us," Callahan said.

Callahan has shared all of the ups and downs on their Facebook Page called Jessie's Journey. The page has more than 5,000 followers encouraging her all along the way.

"I put that together as a way to keep my family informed, and it was actually kind of therapeutic at the same time. I was able to get those raw feelings out about cancer and how it affected me and how it affected Jessie," Callahan said. "I cant thank the people enough who follow her, that sent Jesse wonderful messages."

Severns is also grateful to her following, saying they got her through many rough days.

"Thank you so much. I read all the comments through the entire thing, especially when I wasn't feeling good. I'd say, 'Hey, let's see what the comments say on this post today,'" she said.

This summer, Severns celebrated a huge milestone: she rang the bell at St. Luke's to mark the end of chemotherapy. She was so touched by how many people showed up to celebrate her. Dozens of people were there to witness the symbolic end of her treatment.

"So many other people were there, and I started crying," she said. "But I didn't want to show it because they were just showing how much they cared and wanted me to be happy. I'm very glad that they were there."

The day that Jessie rang her bell, she didn't just ring it for herself. She also rang it for the precious friends she lost along the way. They were there with her in her heart.

"I did it for Colin, Jorge, JW, Maddie, Titus, and all the other kids who didn't get to ring their bell," Severns told us with tears in her eyes. "If they can't ring it, I'll ring it for them."

Severns was also serenaded by her doctors and nurses. It was an emotional and beautiful day for everyone, especially her mom, who has been by her side every step of the way.

This is the same teenage girl. In the first pic she’s fighting for her life during cancer treatment. The second? Weeks after finishing! Jessie Severns battled for almost 3 years. Now, she is ready to start life without cancer. She made it. Watch her tonight on @KTVB. #7sHero pic.twitter.com/EbH9Z6TZlV

"All of those days that you just prayed for a miracle, you just prayed that she made it, and to see her just glowing. Her hair is back, she looks so good," Callahan said. "As mom, you are able to take that breath. She's here with us, she's done it. Now, she can start living her life, because she has missed out on so much."

Callahan is very thankful to everyone who held her daughter in their hearts along the way, family, friends, and people they don't even know.

"To everyone that followed Jessie's page, to everyone who donated blood for her, to our nurses, they would sit in with Jessie for hours, to all of our amazing doctors, you saved my daughter's life," Callahan said. "Saying thank you just isn't enough."

Severns will have blood work every few months to make sure the cancer doesn't return. For now, she's ready to finally be a cancer-free teenager.