7's Hero: Community helps Emmett girl who lost the ability to smile get a much-needed surgery

Five-year-old Annibelle Richesin lost her smile after having surgery to remove a tumor when she was a baby. Now, two local radio hosts are rallying the community to raise money for a surgery that her medical insurance refuses to cover. 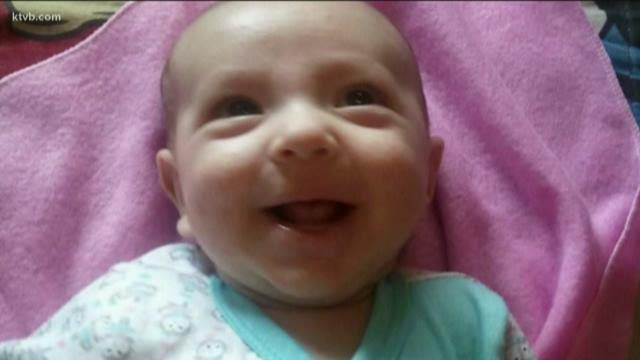 BOISE, Idaho — Rick Dunn and Carly Cash host The Morning Drive on WOW Country 104.3 F.M., but they also do something from the heart. Starting in 2016, they started a program called Rick and Carly's Kids.

Every month, they choose a Treasure Valley child who may need some hope or encouragement. For April's child, the girl they chose is from Emmett, and she's trying to get her smile back.

Annibelle Richesin is five years old but she's missing something that every child has - her smile.

"When Annibelle was born, she had a smile. She even had a little dimple," Heather Richesin, Annibelle's mother, said.

Her parents noticed something was wrong when she was just four months old. Their daughter lost her smile.

"We had multiple doctors tell us it was nothing, it was just a phase she was going through," she said. "We just didn't feel like it was a phase."

Credit: The Richesin Family
Annibelle Richesin after surgery to remove a tumor in her neck at just 5-months-old. The surgery caused her to lose her ability to smile.

Her mother's intuition was correct when she discovered a lump in Annibelle's neck. Once she was taken to doctors, they found out it was a tumor. Doctors removed it, and it was almost the size of a golf ball. Fortunately, it wasn't cancer but the tumor left Annibelle without the ability to smile.

"Over the past five years, we've seen a lot of doctors and neurologists. We finally found a doctor based in Los Angeles," Heather said. "He is the absolute best doctor in this field for this situation."

Heather says her daughter is a candidate for what's called Facial Reanimation Surgery.

"It's two surgeries, possibly three," she said. "One is extending the nerve on her face, and the other is removing the nerve in her calf and putting it in her face."

The surgery is invasive, and it's expensive. The price tag is $70,000 but the family's medical insurance won't cover it.

Credit: The Richesin Family
Annibelle Richesin is starting kindergarten in the fall in Emmett, Idaho. Her mom and dad want to make sure she can smile, so she won't be bullied as she enters elementary school. Their medical insurance won't cover the surgery to bring her smile back.

Rick and Carly are now trying to raise that money during their radio shows for Annibelle's smile this month.

"We're just hoping we can come together as members of the Treasure Valley and rally around little Annibelle and help her get her smile back," Carly said.

The hosts also work with sponsors to shower kids with surprises and gifts from local businesses.

"Thank you, thank you for picking our princess to be part of your family, it's going to make such a difference in her life," Heather said to Rick and Carly.

Rick and Carly are doing great things for kids in our community. They are hoping for a miracle for Annibelle.

"It just kind of creates something magical," Carly said. "By all of us coming together, that's where the magic happens."

If you'd like to help, Annibelle's parents have started a GoFundMe to help fundraise for the surgery.

If you have a child in your life who you would like to nominate to be a part of Rick and Carly's Kids, click here.

Here's a list of the amazing businesses who showered Annibelle with gifts: