7's HERO: 22-year-old Boise woman survives head-on crash, is diagnosed with cancer, and marries the love of her life

"We were both injured, but we got to have that moment and it's just something that I will never forget. It's going to be a fun story to tell our kids." 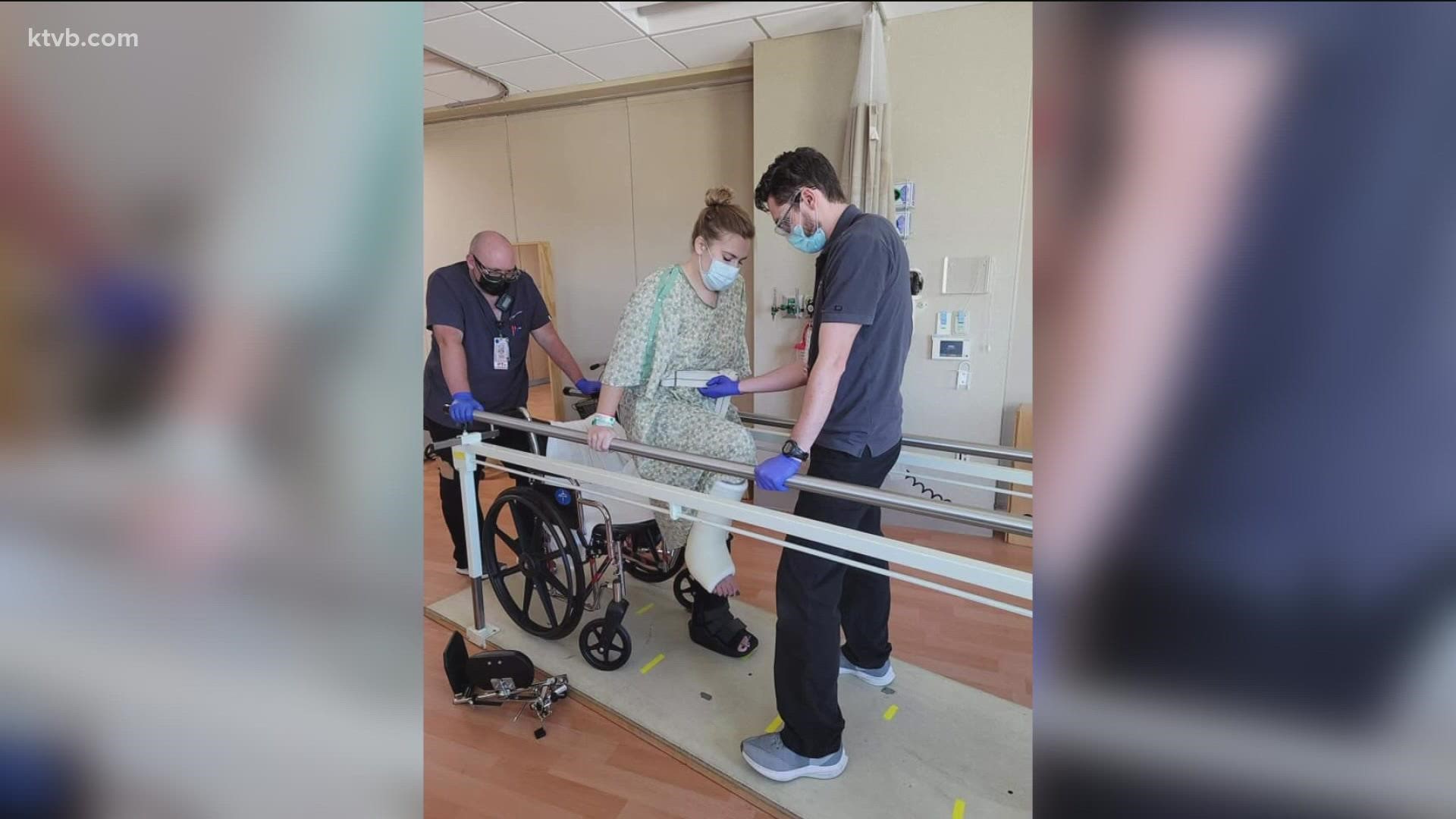 BOISE, Idaho — 22-year-old Lancey Robbins of Boise was driving to Stanley for a fishing trip on Memorial Day 2021 with her boyfriend, Andrew Leon, who was sleeping in the passenger seat when their car was struck head-on by an oncoming vehicle on Highway 20.

“Honestly, I remember everything,” Robbins said. “I realized they were coming straight towards us. We were just on a straight stretch of road and there was a curve up ahead, and I remember seeing headlights. They weaved into the opposite lane, our lane. It happened so fast. I had that sinking feeling, there’s nothing I can do, they were going to hit us.”

Lancey Robbins and her boyfriend were in a horrific car crash, hit head-on.

The Boise couple survived, but what happened next was something they couldn't have imagined.

Now, Lancey is sharing her inspiring story of the power of positivity.

Join us after football. #7sHero pic.twitter.com/BGGyM6ov7O

Robbins described the scene as horrific, with glass and twisted metal all over the place and the smell of gasoline in the air.

“The steering wheel was pressed against my chest. Everything was smashed in,” Robbins said. “That’s when the pain set in and I realized that my legs were smashed.”

Leon, who had initially gone unconscious, woke up. Although he was trapped in the vehicle and his arm was badly injured, he was able to pull out his phone and dial 9-1-1.

Eventually, help did arrive. First responders arrived and extracted Robbins and Leon from the car. A rescue helicopter transported Robbins to the St. Alphonsus Trauma Center in Boise, while Leon was stable enough for ground transportation to the same hospital.

Robbins sustained severe injuries and had to endure three weeks of surgery and extensive physical therapy so she could walk again.

“My physical therapist had to bribe me sometimes to do physical therapy because it was so painful," Robbins said. “They bribed me that if I got in my wheelchair, I could go up to Andrew’s room and go see him.”

During one of Robbins’ trips to Leon’s room, he proposed to her.

“It was a really special moment just to see each other and say, 'We’re still alive, I still have you, and we get to have a future together," Robbins said.

Robbins started documenting her recovery from the hospital and posting videos to Facebook.

“At first, it was just letting people know how I was doing,” she explained. “It made me feel less alone. I just try to uplift and motivate others who may be experiencing hard things.”

However, Robbins’ road to recovery eventually ran into some major roadblocks. One day, her doctor noticed the lymph nodes in Robbins’ neck were enlarged and inflamed, so they decided to do a biopsy test.

Robbins was alone in her hospital room when her doctor told her the results.

“He said ‘I’m sorry to tell you your results came back, and you are positive for non-Hodgkins lymphoma, and you are stage 2,'" she said.

After receiving the bad news, Robbins decided to pray.

“I said, ‘You know, okay God, this is your will, but I ask that I at least get to keep Andrew, that I get to marry him and be with him,'" she said.

Once Robbins was set to start treatment, she returned home for the first time since the car crash and got married to Leon. After so much hard work in physical therapy, Robbins was able to walk down the aisle with a walker and her father at her side.

“We were both injured, but we got to have that moment and it’s just something that I will never forget," Robbins said. “It’s going to be a fun story to tell our kids.”

Robbins said there have been a lot of ups and downs, but Leon has been by her side the whole time.

“Usually, people get married and they have the happy honeymoon phase and then the hard times hit," she said. “We are just going to get it all out now and enjoy the rest."

Robbins has now been battling cancer for several months. She continues to post videos about her cancer journey for her friends and family to see. Her treatment is going well, her cancer is responding, and she hopes to be fully recovered in time for Christmas.

“Even in the hardest of times, there’s always a silver lining,” Robbins said. “There’s always a blessing, a positive thing, something you can learn. I believe in that.”

If you would like to follow Robbins and help her through her recovery you can donate to her GoFund Me. 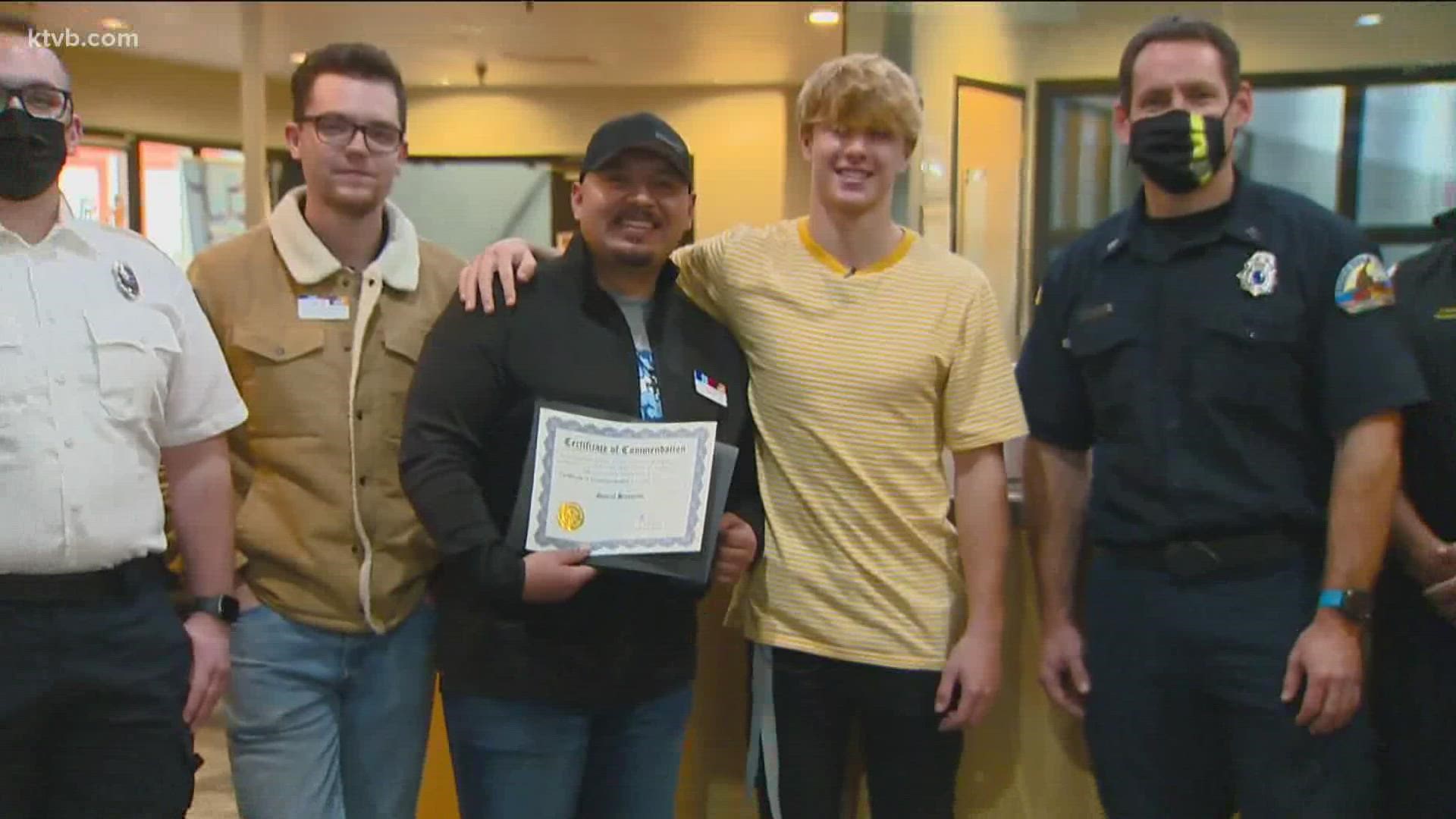 7’s HERO: Eagle teenager meets the man who saved his life with CPR