16-year-old Jacob Serre is at Stanford Medical Center after undergoing a heart transplant in April. His mom is always by his side documenting his journey. 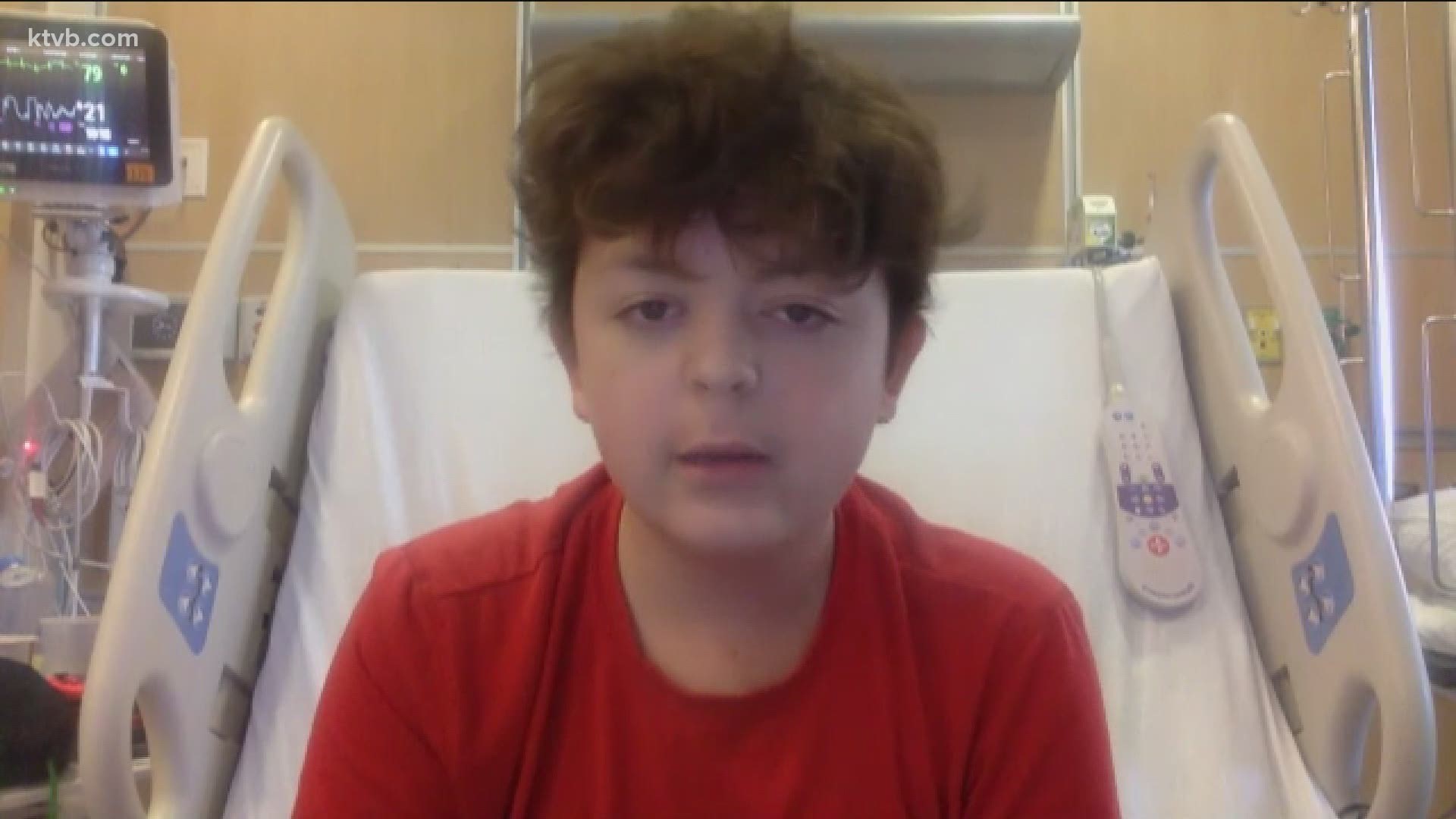 BOISE, Idaho — Boise teenager Jacob Serre was born with a genetic heart condition. He was just a baby when he was diagnosed with Familial Dilated Cardiomyopathy, a genetic form of heart disease.

This condition occurs when the heart muscle becomes thin and weakened in at least one chamber, causing the open area of the chamber to become enlarged. This causes the heart to be unable to pump blood as efficiently as usual.

Jacob's medical team at St. Luke's Children's Hospital in Boise has been watching him carefully since he was a young boy. He started having more serious issues in January of this year.

Jacob was admitted to St. Luke's hospital on February 28, 2021. His condition continued to worsen because his heart was working too hard. After a few weeks, Jacob's doctors told his family they were out of options.

"That's when they told us that there was nothing else they could do, that he needed to go to Stanford Medical Center in California," Serre said.

Jacob was in need of a new heart. After being transferred to Stanford Medical Center, things moved quickly.

Jacob was listed for transplant on Friday, April 2. Jacob's dad, Andrew, his sisters, and little brother stayed in Boise, as they knew it could be quite a wait for a new heart to become available.

"Generally you expect to wait a few weeks to a few months at least," Serre said.

Suddenly, the call they were all waiting for came.

"It was a phone call at night, and every time my mom got a phone call I tried to listen in," Jacob said. "I was just like, 'Yeah, this is it.' Mom just started crying and said it's time, tomorrow morning."

Imagine your teenage son undergoing a heart transplant. It's unimaginable, isn't it? That's just what happened to a Boise mom, and tonight they are spending Mother's Day together at Stanford Medical Center in CA. We'll have the inspiring story in tonight's #7sHERO at 10pm! ❤️ pic.twitter.com/L2BKsWjl0F

Serre was overcome with emotion when she told her son the news. She couldn't believe the call actually came.

"We were surprised because it had only been a week," she said. "You are just in shock for a while. You are excited, but you are in shock and you are thinking about the donor family, and there are just so many things in your mind."

The night before his heart transplant, Jacob was nervous and spent most of his time on the phone with his family. It was an emotional night for the mother and son.

"Lots of phone calls and stayed up late, tried to sleep, but I couldn't," Jacob said.

Before he knew it, morning came, and it was go-time. The transplant team was ready.

"I remember getting rolled down to the room vaguely," Jacob said.

It was tough to leave his mom's side, and Jacob's dad was rushing to get from Boise to Stanford Medical Center in time.

"It was really hard," Jacob said. "My dad got the soonest flight he could, and he was there by the time they opened me up."

Serre said she gained comfort in the fact that her son was in God's hands, and in the hands of the best surgeons in the country.

Hours later, the family received some good news from the medical team.

"He did amazing," Serre said. "They said he would be intubated for one to three days, but ten hours after surgery he was awake and wanting his tube out. He told them to stop the pain meds. He was just taking regular Tylenol, he was up and walking by day four. On day six, he had all his IVs out, was taking all his meds by mouth, and he literally got to walk himself out of the ICU, so it was amazing."

The Serres still have a long road ahead of them. Jacob and his mother will be in California living at the Ronald McDonald House for the next several months, and they will be in and out of the hospital to make sure Jacob's body accepts his new heart.

Serre updates family and friends on her blog and on her Facebook. Updating everyone on Jacob's condition is somewhat therapeutic for her because she feels she can look back at it later and remember what it was like.

"It's been so cool. This is what social media is for, not all the negative things, but this is what it should be used for," she said. "Being able to put out a post and know that thousands of people are reading it and praying all over the world. We couldn't do this without people we have around us."

Jacob told KTVB he has been really uplifted by all the comments from home and from afar.

"Yeah, I read some of them and I'm just super thankful that we have an amazing community back at home supporting us through all of this," he said.

Serre said Jacob's attitude through all of this has been incredible and he's simply inspiring to all who know him.

"He's so resilient," she said. "We've been in the hospital for two months and he's still happy and takes everything in stride."

As Jacob adjusts to his new heart and everything that comes with it, the donor and the donor's family are always top of mind.

"Obviously, it's a huge loss for them, but I would like to just have them know there is something good that came out of it," Jacob said. "A new chance for me."

In honor of his donor, Jacob plans to make the most of this beautiful chance at a new life. One day, he would like to meet the donor's family, but that is entirely up to them. The family plans to write a letter to them, with the hopes that one day they write back.

"It's amazing that somebody would give him this gift," Serre said.

Jacob is back in the hospital with some complications, but his mom is right by his side and said he is a trooper. The goal is to avoid rejection and get Jacob back home to Boise with his whole family.

You can follow his journey on Jinjue's blog here.