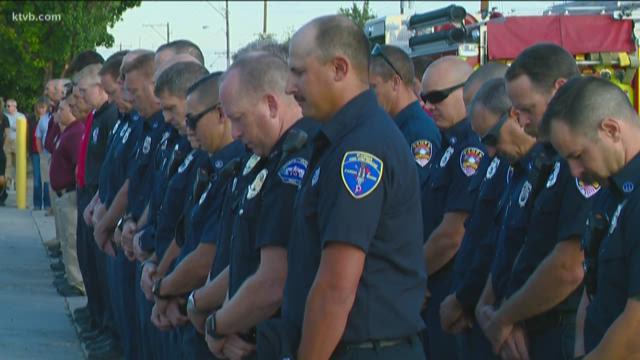 NAMPA, Idaho — Americans across the United States are honoring the victims of the September 11, 2001, terrorist attacks.

The Treasure Valley held several ceremonies, including one at Nampa Fire Station No. 1 and one at Freezeout Hill Memorial outside Emmett.

"I think it's important because we need to make sure it's on the front of everybody's mind every day, and it's written on our duty shirts. It says 'Never Forget' on the left sleeve, and I think it's just important that we must never forget," said Captain Steve Savoca with the Nampa Fire Department.

Veterans also reflected not only on those who lost their lives on September 11, 2001, but also the years of war following.

"I was in the Guard so I knew my life was going to change and it was just a matter of time," said Gordon Petrie, VFW State Judge Advocate. "It was a situation where we all sacrificed in one degree or another and as an older vet at the time it was quite the sacrifice. Not only was I leaving the family, with a wife and children, but even grandchildren at the time."

The terrorist attacks left a lasting mark on all of us as we continue to move forward.

"We are grateful today for all who continue to protect us, our families, our loved ones and friends," said NPD Chaplain Andy Satta. These include our firefighters and EMS and police personnel and all those who support them. We pray that you will give them strength for their tasks, and wisdom in completing them. May we all remember that in life and in death our comfort is in the Lord."