"We are tired. We are tired of them escaping," says Melinda Pedraza, who lives just feet from where the latest escapee broke free from the Canyon County Jail's tent facility. 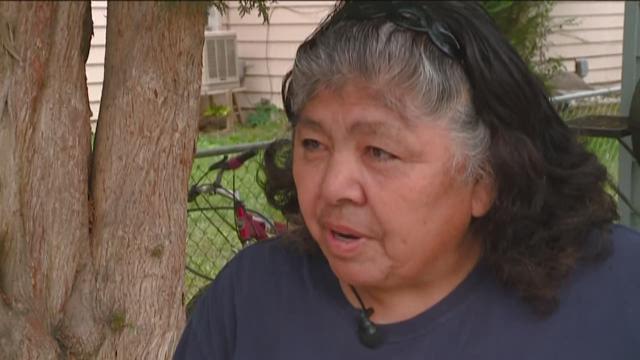 Required - and necessary - security improvements to the tent were finished last month, but none of them stopped Eric Garcia on Wednesday.

Before he was caught, Garcia tore through a patch in the canvas in the back bathroom area, somehow broke through the outer layer, jumped through a hole, hopped over the newly-updated razor wire fence and into the neighborhood across the street.

After that most recent escape, KTVB wanted to get a sense of how people are feeling about the jail, and if they think the problem should be fixed. We found mixed feelings walking door-to-door Thursday afternoon. Some folks didn't know the most recent event happened and it doesn't affect them, but many say the issue is unsettling.

Donya Doty has lived across the street from the Canyon County Jail tent facility for 16 years. She says it was not concerning until they turned the tent - used at the time for work-release - into a jail to house minimum-custody inmates.

"It's an unsafe area. It's not good for the neighborhood," Doty said. "It's pretty crazy. It gets scary at times."

Now, after nine criminals have escaped just yards away in the last two years, she's fed up and disturbed. She says she's never notified of the escapes.

"It's like, wow. And you don't know what kind of people they have over there," Doty added. "Living this close, kitty corner. I have grandkids. If they escape, I mean, who knows."

Wednesday's escape again highlights the need for a new jail, in the opinion of the Canyon County Sheriff's Office and some people KTVB talked to who live within just a few blocks.

"We have people living in a tent. From all of our standpoint, you can do however much fortifying to a tent but they have 24 hours a day in there to try to figure out what weakness can be exploited and get out of there," Canyon County Jail Commander Capt. Daren Ward said.

"And obviously that's what's happening. Because we just finished a whole lot of major renovation in there to harden the structure and we had yet another one break through. Very fortunate that we caught him at a very short time afterwards."

"I'd probably vote for it, for safety," Doty said.

"Definitely something to consider and probably definitely necessary just for the safety of everyone here," neighbor Shannon Douglas said. "I have kids and I don't want anybody who belongs in jail in my home."

That's also the opinion of Melinda Pedraza, who lives just feet from the back of the jail tent where the escapee broke through on Wednesday.

"Oh, I feel terrible because we were sitting out there waiting for the bus - for the neighbor's little boy to get on the bus - and he just ran by us," Pedraza said. "That's scary to us!"

She says a previous escapee last year was hiding out in her backyard.

She tells us she would support putting her tax dollars toward a new jail.

"They wasted a lot of money on [those security measures] and they still didn't work. They're still jumping the fence," Pedraza added. "Too many people, and they've got to do something to build another one."

But not everyone feels that way. We talked to several neighbors who didn't want to go on camera but said they wouldn't vote to pay for a new jail. Some say they aren't worried about or scared over the escapes. A couple neighbors told us if an inmate from the minimum custody tent facility escaped, they don't believe that inmate would harm them.

Others say they would rather see less people incarcerated and more rehabilitation services built.

"The county is in a crisis in jail space," Capt. Ward said. "The jail has not grown in the time the county has grown."

Canyon County sheriff's officials expect a ballot measure to be put before voters in May, making it the fourth opportunity in 12 years for voters to say 'yea' or 'nay' to a whole new jail that would be built on 24 acres of county-owned land about three miles outside of town on Highway 20/26. The bond issue would take a two-thirds majority vote to pass.

"We're a few minutes from anywhere," Capt. Ward added. "It's really affected everybody in the county."

The jail has 477 beds with 452 currently occupied; to help address overcrowding, more than 20 inmates are being housed at other jails across the area.

The captain says there are 600 people out on pre-trial release in Canyon County and 200 or so of them should be in jail, but the county doesn't have the room.