Late Thursday, a property manager said he was working to get more debris cleaned up in the area. 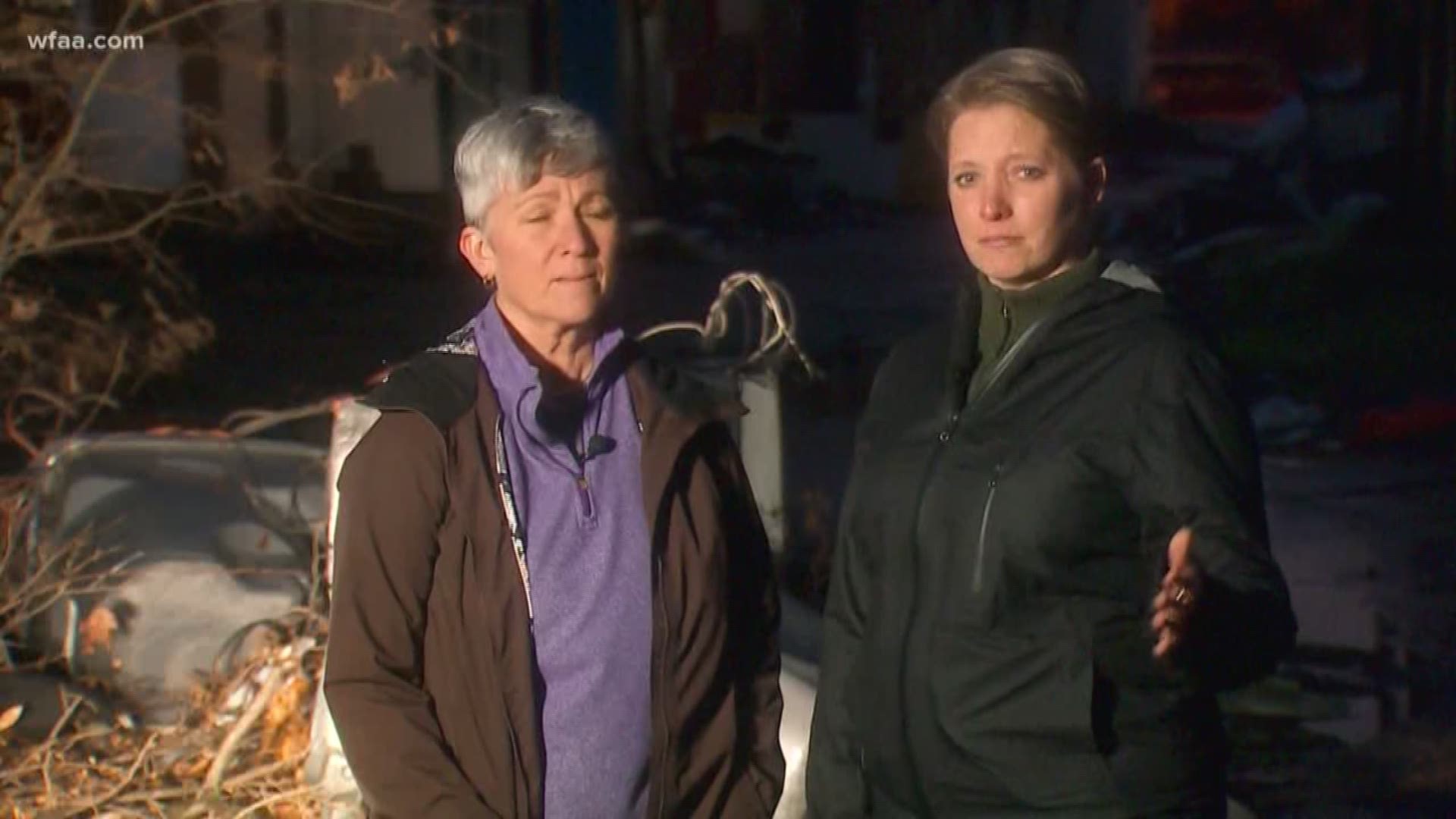 DALLAS, Texas — Bricks, trash, and twisted metal still consume much of a back alley behind a Dallas shopping center that was ripped apart by an October tornado, and neighbors with homes backing up to the property are getting tired of dealing with it.

But the shopping center, which is located at Marsh and Walnut Hill Lanes, is stuck between a rock and a hard place.

Its owners are still waiting on an insurance claim to be finalized, almost three months after the tornado.

Credit: Google
A Google street view of the shopping center before the tornado hit.

The shopping center is owned by Hopkins Commercial Real Estate and housed a number of businesses before the tornado hit.

Now, the front is fenced up and those businesses have moved out.

Credit: WFAA
An aerial photo of the shopping center the morning after it was hit by a tornado.

The main parking was littered with cars, debris, and damage after the tornado and it has all since been cleaned up.

However, the back alley has hardly been touched since the tornado wreaked havoc.

Credit: WFAA
Photo of the alley behind the shopping center.

It's a pretty mangled mess. The alley is filled with cinder blocks, bricks, metal and debris blown off of the building.

But Shanna Lee and Dawn Lee, who live next to the alley, say there's more than that. The couple says that the alley has become a dumping ground since the tornado hit.

"It changes daily depending on how many people come here," Shanna Lee said.

"There's rats there, and bugs that weren't there before. People dump dirty diapers, sofas, I mean it still looks like a tornado went through it."

The Lees say that after the tornado they cleaned up a lot that was left behind.

They also have had to replace four tires because of nails, and now sweep the alley regularly.

"Literally we are the people who are out here with brooms sweeping the alley," Shanna said.

There's also a concern about potentially hazardous industrial waste. Several HVAC units are still in the alley and some sit in groundwater depending on if it rains or not.

"We've cleaned up as much as we can, but there are just things that we're not going to touch because we don't want to get in the water," Dawn said.

Credit: WFAA
Dawn and Shanna Lee tell WFAA that the dumping in the alley behind their home has gotten out of hand.

One of the more difficult issues deals with looting. A property manager for Hopkins Commercial Real Estate told WFAA that there have been problems with people taking things from several stores.

The Lees say homeless people also rummage through the trash and debris left behind.

"They literally use our alley as a toilet. Not nice," Shanna said. The fence blocking off one side of the alley has also not been fully secured. It was open when WFAA came to see everything.

"It's not doing much, and there are doors right behind us that go to the properties and they were not opened by the owners."

Mike Hopkins, the founder of Hopkins Commercial Real Estate, told WFAA that he's been devastated by the ordeal.

Hopkins, who has been in the commercial real estate business for decades, not only had this property damaged but another shopping center across the street that he owns was damaged too.

Two homes in his family suffered damage as well.

He told WFAA Thursday that he wants to be a good neighbor, but added that he hasn't been able to fully demolition the property or redevelop it yet because his company is still waiting on an insurance claim to be finalized.

Structural engineers and insurance filings have tied his company's hands.

However, a property manager from the company told WFAA late Thursday that he would try to clean more of the alley up and hire contractors to do so.

That is really all the Lees want.

"Just come clean up a little bit of the stuff that's behind us," Shanna said. "That's something you can do."