The National Weather Service warned Friday morning that flooding is "likely" after the Weiser River was blocked by an ice jam. 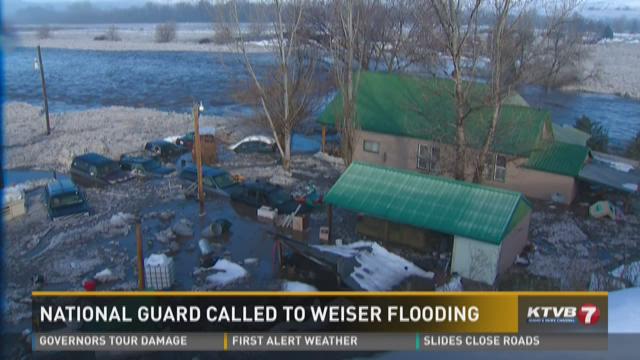 WEISER, Idaho -- The National Guard successfully rescued a 68-year-old man Friday after floodwaters stranded him inside his home in Weiser.

The 5,300-population town and the surrounding low-lying areas of Washington County began to flood overnight after an ice jam blocked the Weiser River from flowing into the Snake River, sending water spilling over the banks.

According to the National Weather Service, the east part of town is particularly at risk.

"Persons near the Weiser River, especially in the east part of the city of Weiser, should take precautions to protect life and property," the weather service posted. "If possible, keep a safe distance from the river and avoid any low-lying area where water from the river may flow."

Some of the worst flooding appears to be near Cove Road and Couper Lane, where water is standing several feet over roads, fields and yards, and in homes in the area. 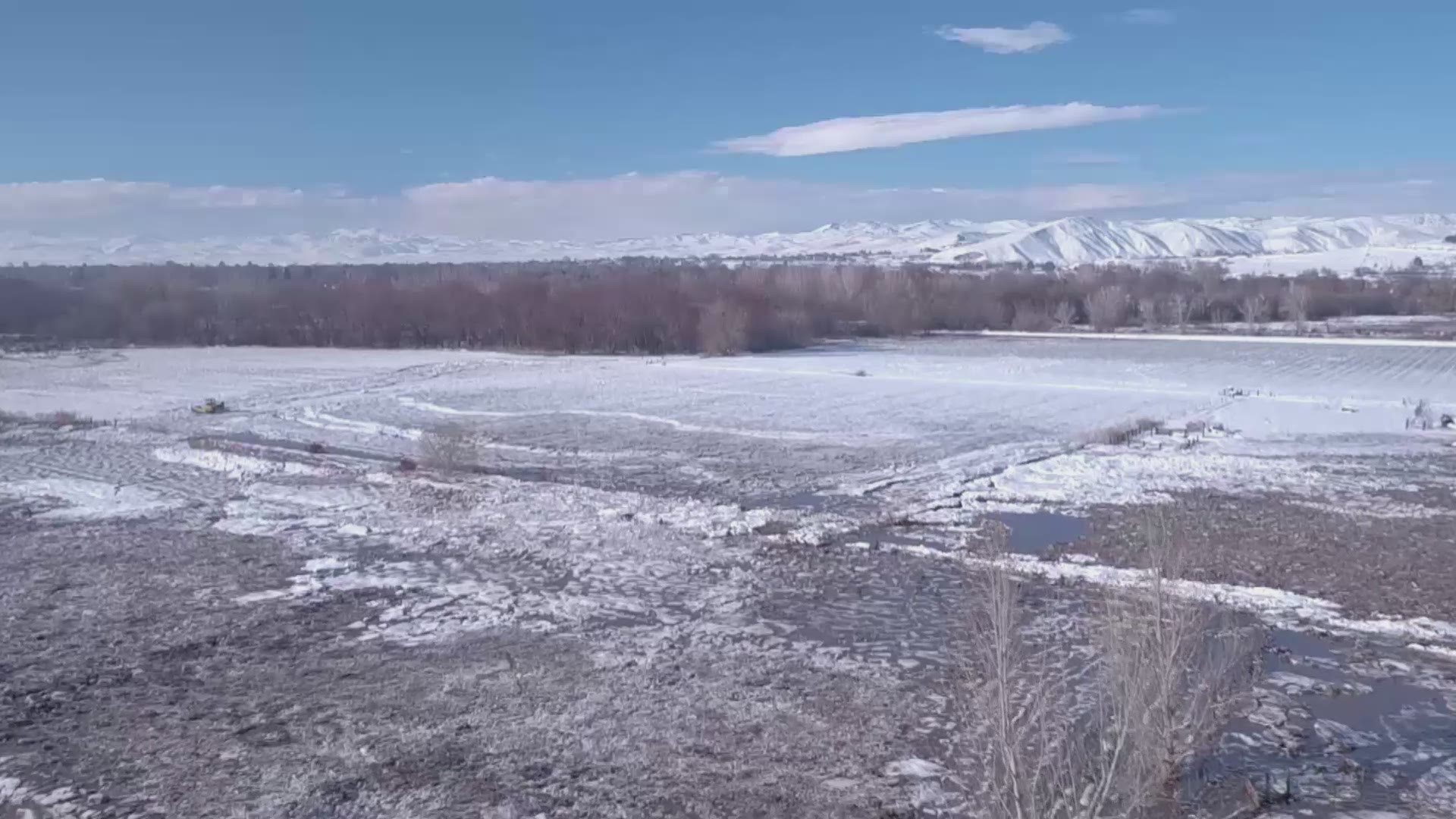 Boise Fire worked with local authorities to reach two men trapped in two different houses in that area. An attempt around noon to reach the houses in an inflatable raft had to be scuttled due to fast-moving water.

Washington County Disaster Services spokesman Steven Penner said one of the residents told his would-be rescuers he did not want their help, and declined to be evacuated.

Officials had not been able to contact the other man, whose landline phone was rendered inoperable by the floodwater. Firefighters tried to get in contact with him by megaphone, but were unsuccessful.

Although authorities wanted to make sure that resident didn't need medical attention, he may not want their help either, Penner said, noting that the 68-year-old refused to leave his home during a worse flood 20 years ago.

"He rode it out then, and the water was much higher," he said.

The Idaho Army National Guard UH-60 Blackhawk helicopter and crew flew over the house after 2 p.m., hovering low enough to allow several emergency responders to jump out into the water near the man's property. After they spoke with the 68-year-old for about 20 minutes, he came outside and was hoisted up into the helicopter. 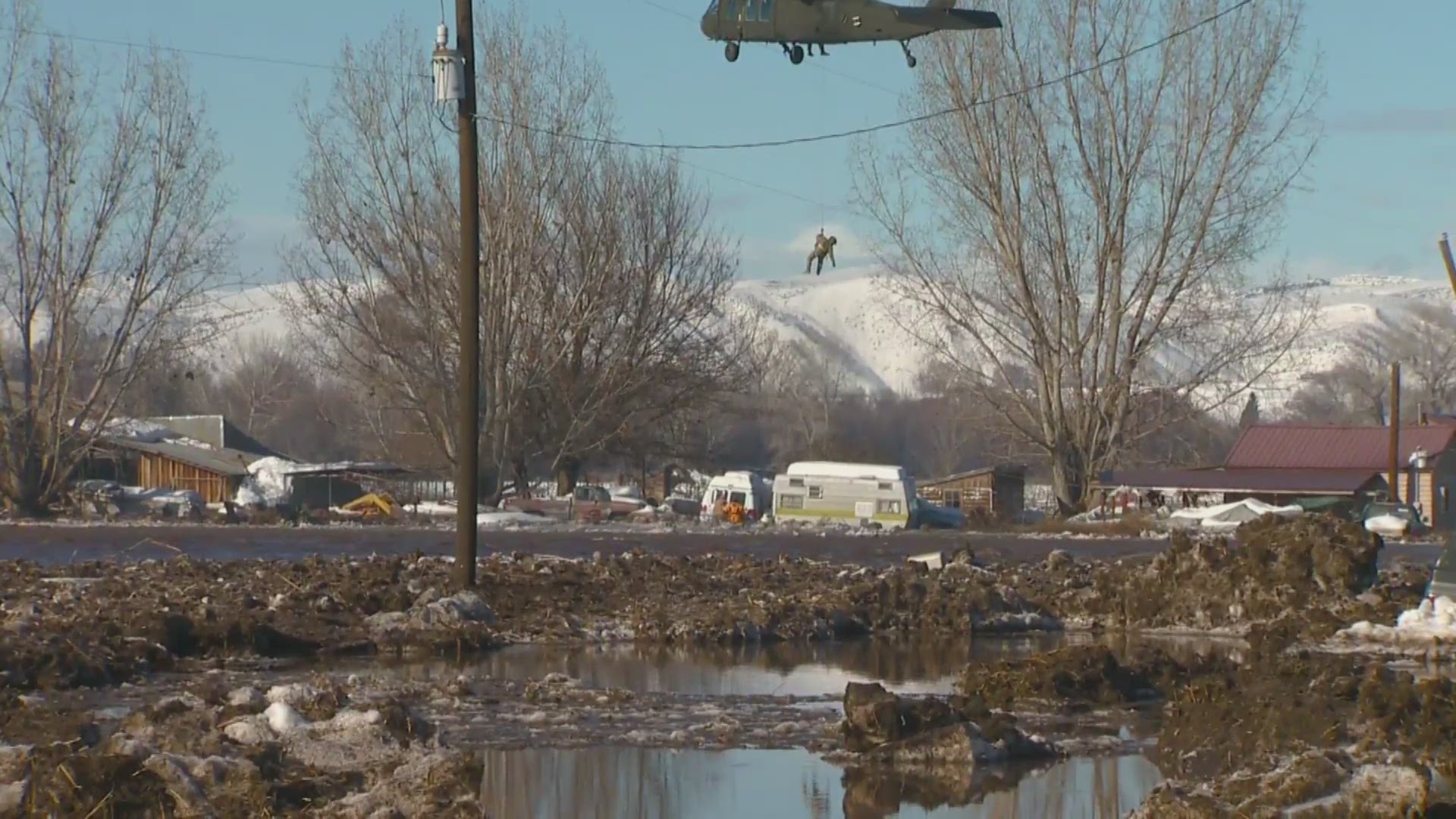 The resident was then taken to the airport in Weiser.

Flooding near the Weiser River

Another family who lives in a nearby house and their four horses had to be rescued earlier Friday morning. Despite firefighters' efforts, a pair of goats at the home refused to be evacuated. A KTVB reporter on scene said they could be seen sitting comfortably on the deck of the home, and did not appear to be in any danger.

At least nine vehicles were submerged in the yard of that home.

Penner said rescuers also saved five adults and three children who were standing on top of a car in the rising water at about 7:30 a.m. Friday.

A flood warning remains in effect until nearly midday Saturday. U.S. 95, including the Weiser River bridge, is blocked in both directions due to high water. Residents and visitors can still get to town on Highway 201.

Keri Clancy of Weiser said she and her fiance received flash flood alerts on their cell phones in the early hours of Friday morning, but decided not to leave their mobile home on Washington Street.

But not long after, the couple woke up to someone pounding on their door.

"My fiance went to the door and the police were there telling us we had to leave now," Clancy said.

After grabbing the dogs and a few belongings, Clancy headed to her parents' house in Middleton. Her fiance stayed behind to help neighbors get out. By the time he cleared out to head to work, she said, the water had reached the top step outside their home.

Clancy said the flood was the latest weather-related debacle her family has had to contend with: She had to leave the farmhouse she was living in in January because of the weight of the snow threatening its structural integrity.

"We just moved here in the beginning of the month because our house in Payette was beginning to collapse," Clancy said.

Weiser Police Chief Carl Smith said a shelter for anyone displaced by the flooding has been set up at the Vendome Event Center on State Street in Weiser.

Smith said there are no mandatory evacuations in place, although he encouraged people to move to higher ground if they are in the flood area.

"It would be common sense and in their best interest, but we haven't forced anybody to leave," he said.