Nampa police and firefighters use vacant hospital for specialized training

Police officers and firefighters said it is very rare for them to get to train in a building as big as the old Mercy Medical Center. 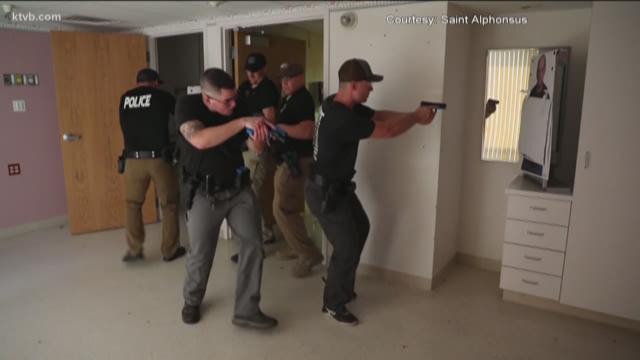 Police and fire crews went to the vacated hospital, owned by Saint Alphonsus, on 12th Avenue in Nampa to take part in various training scenarios, including active shooter and terrorist situations.

The building, formerly known as Mercy Medical Center, is slated to be demolition, so Saint Alphonsus opened it up first responders on Monday morning.

Police officers and firefighters both said it is very rare for them to get to train in a building as big as the old Mercy Medical Center, which makes this training invaluable.

“Utilizing this building has allowed us to be able to train for real-world situations in a confined facility. Saint Alphonsus has provided an invaluable location for invaluable training. The size and magnitude of the building has allowed us to simulate a number of training scenarios without leaving the property or disrupting the public,” Sgt. Jason Cantrell with Nampa Police said in a statement.

Nampa Fire Chief Kirk Carpenter thanked Saint Alphonsus for the opportunity to train there, adding that the training will help them respond to emergencies and serve the community better.

Editor's Note: Video of the training was provided by Saint Alphonsus.

RELATED: Former Mercy Medical Center in Nampa to be demolished