Because International, known for 'The Shoe That Grows,' is expanding their product line in their pursuit to minimize global poverty. 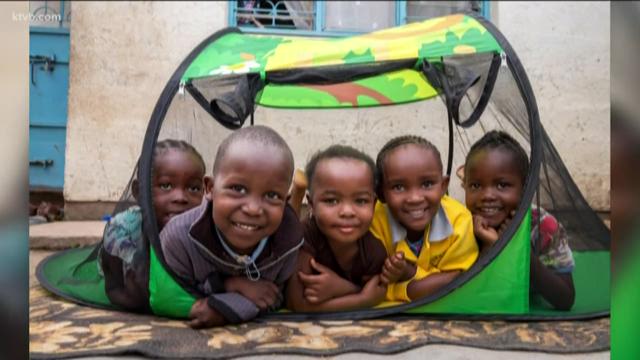 NAMPA, Idaho — Because International created "The Shoe That Grows" with the intent of preventing children from outgrowing their shoes.

The Nampa nonprofit has been shipped over 250,000 pairs to 100 different countries in the last four years. Seeing that success, Because International founder Kenton Lee decided to expand their product line.

"Our mission is really more than just our shoes," Lee said. "Our second project is around mosquito nets that will try to protect people from mosquitoes and malaria."

"About half the world is at risk of malaria and so many people sleep under a mosquito net," he added.

The traditional design of the mosquito net requires the product to hang from the ceiling, where the user would drape it over their bodies, protecting them from mosquitoes.

Lee spent six months living in Kenya. During that time he came up with the idea for "The Shoe That Grows," but he also realized a flaw in the traditional design of mosquito nets.

RELATED: Nampa nonprofit planning to launch commercial version of the Shoe That Grows

"If someone sleeps outside on the streets or they're on the move and they don't sleep under a ceiling, they can't really use a traditional bed net," he said.

So Lee and his team targeted the design flaw as an opportunity for their improved mosquito net, Bed Net Buddy, specifically designed for small children under the age of five.

When expanded, Bed Net Buddy is five feet long and stands three feet tall. The collapsible net features designs inside in an effort to help kids look forward to sleeping, a ritual Lee said they might not have enjoyed before.

The Bed Net Buddy is also coated with something Because International refers to as LLIN - short for Long Lasting Insecticide Treated Netting.

"When mosquitoes touch the netting it actually kills them," Lee said.

Bed Net Buddy is still just a prototype in a trial phase.

Because International has approximately 1,000 of them around the world, working to improve the design through practical usage and feedback.

"Some are in Cameroon, and some are in other African countries continually being tested, but it needs a lot of work," Lee said. "That's probably the biggest takeaway we have. We have challenge, we know that there's a problem, and we're seeking a solution, but it's not there yet."

Lee mentioned that the process is all part of the journey of innovation, and that anyone can help Because International reach their goal.

Global poverty can be really complex and intimidating," he said. "One thing we can do is just make it clear about how everybody here in the valley can make a difference if they want to."

Because International also has an "incubator program" supporting other like-minded entrepreneurs around the world.

The nonprofit is currently working with 10 entrepreneurs with the hope of transforming their ideas into helpful products.