The cause of the water line burst on Fairwood Place has not been determined. 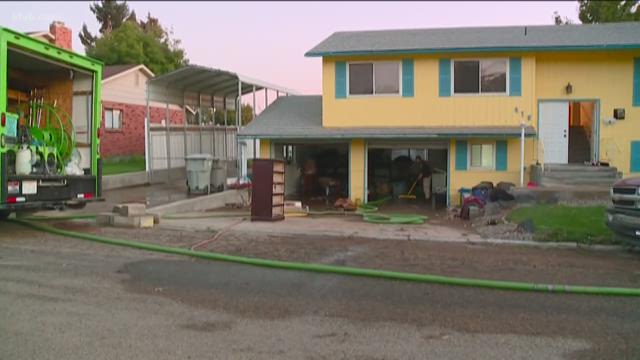 City of Nampa Waterworks got the call at about 4 p.m., after an irrigation main line burst, sending water into homes on Fairwood Place, which is off of Lone Star Road and Canyon Street.

"We came home from the boys' sports for the day, and we heard a pounding on our door, and it was our corner neighbor, and she was like 'the whole subdivision is flooding!' We opened the door, and there was water coming out, like gushing." said Elizabeth Richards, one of the homeowners. "We knew that since ours was the lowest graded driveway that we were probably going to be in trouble."

Richards said neighbors came and placed stones to try and divert some of the water, but "it was too powerful," she said, adding that her garage was under about three feet of water.

"Our whole lower half of the house is destroyed," she said.

The lower level of the Richards' split-level home includes their boys' bedrooms, Elizabeth's brother-in-law's room, and a family room.

"We're going to live upstairs. We can't afford to stay in a hotel for a while, so the upstairs, thankfully, wasn't damaged," Elizabeth Richards said. "We have an amazing church family, who we just met, and they came and they grabbed the boys' clothes, because it was all over the place. They grabbed their clothes, my brother-in-law's clothes, they're washing them all for them. So we're just going to move everyone who was downstairs upstairs, and tiny-house live it for a bit, and see how long it takes to restore."

Elizabeth Richards said she was told water was flowing from the broken main for about an hour straight.

"We thought we had stopped it with blankets and towels, and it came through the door seam instead, like it was going to find a way in no matter what," Elizabeth Richards said.

"Nampa irrigation came out, they shut the water down pretty quick," Darren Richards said. "They came by and gave us information to talk to the city, and then a couple of guys from the city assessor's were real good. They talked to us, told us what we need to do to get a claim number from the city, and they told us the city would take care of everything."

Affected homeowners have been told to open a claim in writing on Monday.

Elizabeth Richards said ServPro, a damage restoration company, began working without the deposit the company typically asks for up front.

"They're going to wait 'til Monday because it's not on us, and we weren't prepared for something like this," she said. "It's still going to be months of work, I'm sure, and hard, but it helps knowing that (Nampa city officials) are going to tell us where to go and cover our damages."

The cause of the water line burst has not been determined.