Those behind the petition are asking for the recall election to be placed as a ballot question in a special election. 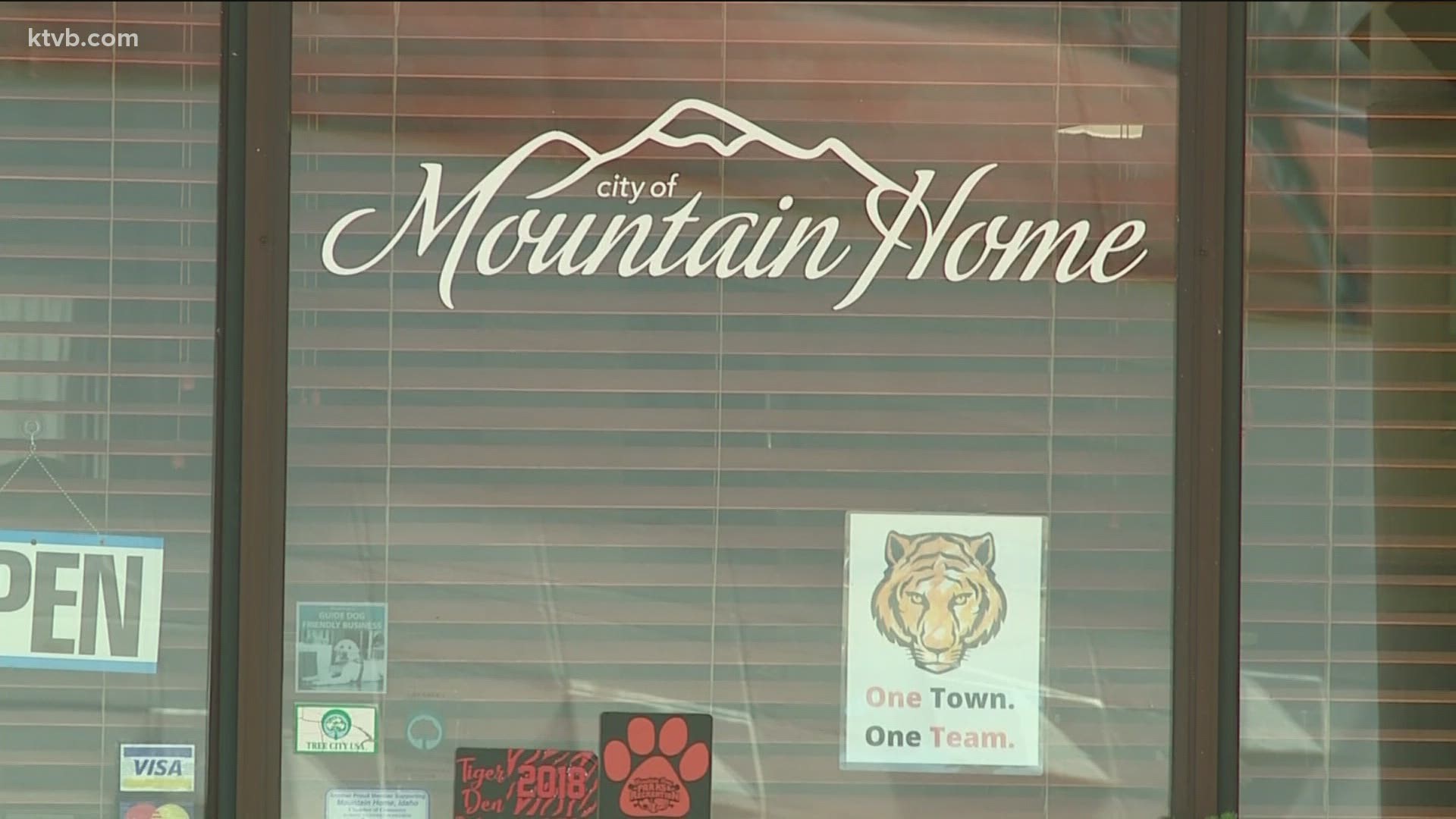 MOUNTAIN HOME, Idaho — Residents who are dissatisfied with Mountain Home Mayor Rich Sykes' handling of the coronavirus pandemic and other issues are launching a recall bid.

The group, which has filed a recall petition with the Mountain Home City Clerk, accused the mayor of ignoring citizens, violating the Constitution and misappropriating taxpayer money.

According to the organizers behind the recall, Sykes used city money to build a training range for police, then used the facility to work out while other gyms in Mountain Home were closed. Members also say that the mayor asked his staff to sign a letter promising not to criticize his policies and threatened on social media to lock down the city, which the recall organizers say frightened residents and business owners, "irrevocably damaging our financial stability and precious freedoms."

RELATED: 'It's against our constitutional rights': Boise shop reclassifies business as private after mask mandate

"Rich Sykes has proven to be arrogant in power and comfortable removing our constitutional rights," the petition reads. "The citizens of MountianHome deserve better leadership."

Those behind the petition are asking for the recall election to be placed as a ballot question in a special election.

If organizers meet that benchmark and those signatures are verified, the recall effort will appear on the ballot.

Sykes is not the only local mayor facing scrutiny: In Boise, recall petitions have been filed against both Mayor Lauren McLean and city council member Lisa Sanchez.

In a lengthy July Facebook post, Sykes called the allegations in the petition "falsehoods" and wrote that:

"I am proud of the work that we have done as a City thus far and look forward to continued progress in the coming years," he wrote. "I love this city too much to be bullied into silence by those who feign outrage to advance their own agenda."

Citizens of Mountain Home,
I’m writing today to address some of the falsehoods contained in the recent recall petition filed at City Hall June 16, 2020.
The first allegation is that I “misappropriated funds to build a private gym under the disguise of a training range for law enforcement…”. The request for the training facility came directly from our first responders as a way to help them maintain physical fitness, relieve stress, and improve morale. The funding source for the construction of this facility was created with development funds collected from building developers for both the Fire and Police Departments specifically to improve their infrastructure assets. The funding source was not created with taxpayer dollars.

The primary purpose and scope of the facility was briefed to, and voted on, by our elected City Council members and construction started in April 2018. We initially looked at building the facility on Mountain Home Police Department property but discovered that preparing the ground would have been cost prohibitive due to the need to blast rock prior to laying the foundation. I then consulted with the Mountain Home Fire Department Chief, who agreed that he had space on his lot and recognized the facility’s benefits for our paid-on-call firefighters. During construction, the Council and I also realized that other City employees could benefit from the facility and we decided as a group to offer access to all employees as an additional benefit.

We completed construction of the training facility in May 2020 and required all City employees who stated a desire to use the facility to participate in safety training prior to being issued a key to the facility. Exercise is one of the best ways to improve personal health, reduce stress, and maximize job performance. In the long run, fewer insurance claims ultimately may lead to lower insurance premium costs to the City. This facility directly affects the mental and physical health of our first responders and all City employees who take advantage of its availability in a positive way, and I am proud that we were able to provide that for them. But make no mistake, we did so by the book and with the consent of the council.

The second allegation in the petition related to a confidential confidence agreement. It alleges that personnel within the fire and police departments were terminated or resigned as a result of the agreement. First, Mountain Home Police Department was not involved in this in any way and no officers were ever asked to sign this or any similar document. As far as the fire department, Fire Chief Mark Moore has already partially addressed this issue in a previous letter to the editor (May 13, 2020) in which he stated that he had been forced to make some tough decisions regarding the department. As Chief Moore stated so well in his letter to the editor, “When personnel issues arise within our department, steps must be taken to maintain the department’s continued ability to effectively accomplish its mission, as well as to protect all individuals involved.”

I support those decisions and offered this agreement as a means of reinforcing the need for unity of effort and voice within the department. The agreement was drafted by the City’s Human Resources Attorney, not by me, but it does reflect my own steadfast support for Chief Moore’s experience and leadership as he continues to develop and adapt our firefighting force for the future of our community. Contrary to popular belief, our firefighters are no longer volunteers; they are paid-on-call employees of the City, subject to City polices, and should be held to a reasonable standard of conduct, one which some were falling well short of. The reason every member of the department was required to sign was simply to show that the department was unified and it would have seemed unfair to require only those in violation of the most basic employee/supervisor etiquette to sign while the vast majority of our firefighters, those who do their best every day to help Chief Moore guide the department and serve our community, were exempted. We simply needed to reiterate expectations for everyone across the board and show that the department was together as one unit. Despite these recent challenges, the department hasn’t missed a beat when it comes to serving our community. In Chief Moore’s own words, “I can assure you that at no time has the level of safety or service been compromised or diminished. We continue to respond with personnel who are committed, experienced and highly trained to provide the most professional level of service available.”

Finally, the petition says I violated the right of assembly during a live question and answer session on social media. While I may have gotten ahead of myself in fielding ideas for ways to ensure Mountain Home citizens did not become a list of COVID-19 statistics, I never ordered any citizen or business to do anything during this broadcast. I simply do not have that authority. As I stated during the broadcast, all of my ideas were just that – “ideas” – and would have needed to be filtered through the appropriate experts, including the City Council, legal counsel, the chief of police and Mountain Home Air Force Base leadership to name a few. I did my due diligence with each as promised, and ultimately determined that no additional restrictions were required. However, just as certain people want to hold me to account for my desire to do whatever it took to protect our citizenry from this virus, I can just about guarantee that those same individuals would be calling foul now if I had under-reacted and more citizens were hospitalized or worse.

In my time as Mayor I have heard and addressed the concerns of our citizens. I was elected on a platform promising to take concrete actions toward positive change. They told me it was time for new ideas, to bring more opportunities and amenities, to update and improve the way Mountain Home does business. I have taken that mandate to heart and taken action. I am proud of the work that we have done as a City thus far and look forward to continued progress in the coming years. I love this city too much to be bullied into silence by those who feign outrage to advance their own agenda.

I hope that when you are confronted by the individuals circulating this petition that you remember the false accusations that I have brought to your attention here. I hope you remember the context and background surrounding each of these false accusations. Finally, I hope you’ll let them know that your vote and your voice matter as much as the vocal minority who are working so diligently to distract from the truth to benefit their own political ends. I was just re-elected into office in November of 2019. The results were clear, and the citizens spoke at that time to vote me back in for another four-year term. I’m a firm believer in the public process. For this matter that process is clear. If the citizens no longer want me in this office, the right opportunity to express that sentiment occurs in November 2023.