The crickets are known to blanket entire sections of roadway, creating slick conditions for drivers. 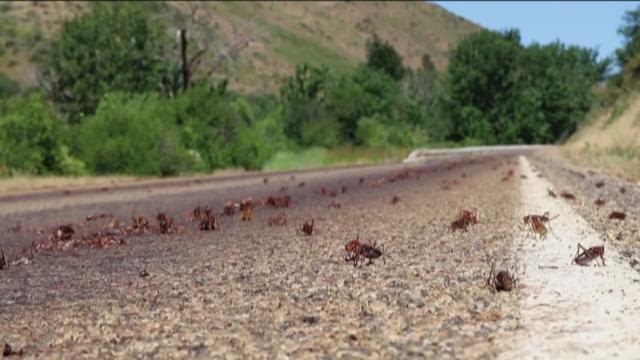 Holiday travelers be warned, Mormon crickets are causing problems along some popular stretches of Idaho highways.

Idaho 71 is swarming with the migratory insects between Cambridge and Brownlee Reservoir.

Officials warn that with the crickets constantly covering the road, it makes the narrow and twisting stretch between Cambridge and Brownlee that much more dangerous and distracting.

The crickets are known to blanket entire sections of roadway, creating slick conditions for drivers.

1 / 7
<p>Mormon crickets cover a stretch of Idaho 71. Transportation officials warn that the migratory insects can cause slick roads.</p>

ITD spokesman Vincent Trimboli tells KTVB that if drivers encounter Mormon crickets while traveling, to drive just like they would in icy conditions.

“When there's a large amount of them on the road, the road becomes very slick," said Trimboli. "We advise people to drive like we always advise, both hands on the wheel, eyes on the road and mind on the driving."

According to ITD, warning or caution signs are generally not posted along the highways because the crickets have been known to come and go very quickly.

Other Mormon crickets swarms have also been reportedly seen on sections of highways 95, 55 and 21. The crickets are no strangers to Idaho and can become a seasonal nuisance not only on Idaho’s roads, but for its crops as well.