More Syrian refugees in Boise than NYC and LA combined 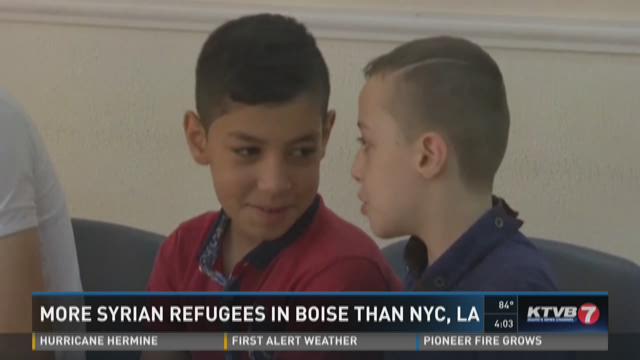 The United States has now admitted its 10,000th Syrian refugee. It's all a part of President Obama's resettlement program. A decision that has come with a lot of controversy.

Syrian refugees have been coming into the U.S. since 2012 and placed in 231 cities across the country, including Boise. In fact, a New York Times article shows the City of Trees has welcomed in more Syrian refugees than the two largest cities in America: New York and Los Angeles. However, why is it that a city of nearly 300,000 is seeing more than a city of 8 million?

"Actually, Boise has been recognized nationally and even internationally in some situations as a welcoming community," Jan Reeves with the Idaho Office of Refugees said.

Reeves says Idaho has been resettling refugees since the mid 1970s, and over that period of 40 years has seen roughly 20,000 come to the Gem State.

"Roughly a thousand to eleven-hundred refugees arrive in Idaho each year and this has been true for about the last four or five years," Reeves said.

Renee Hage with World Relief says those refugees are coming from all over the world.

Since 2012, as a part of President Obama’s resettlement program, 10,000 Syrian refugees have been resettled in cities across the United States.

"About 10 percent of the refugees that have arrived this year have come from Syria. So 1 in 10, and if you look at the national numbers 10,000 Syrian refugees with Idaho receiving a little over a hundred, 1 percent of the total," Reeves said.

Hage says when organizations do look to resettle refugees they'll look at places where they can be successful and where it's more affordable, which isn't Los Angeles or New York City.

"They wouldn't be targeted to go to those communities. Those communities are very expensive," Hage said. "They're very hard to serve someone if there's not a family tie or connection. So they're really not sent there."

Boise is also a popular place because of the track record the city has around the country. Hage says the City of Trees has been successful in getting refugees in homes and getting them started. She also attributes the success with the people who live here.

"I really think it's the people because the greatest success of integration and welcome is people meeting people," Hage said.