Rya Johnson hopes to change the statistics of domestic violence after her family survived it. 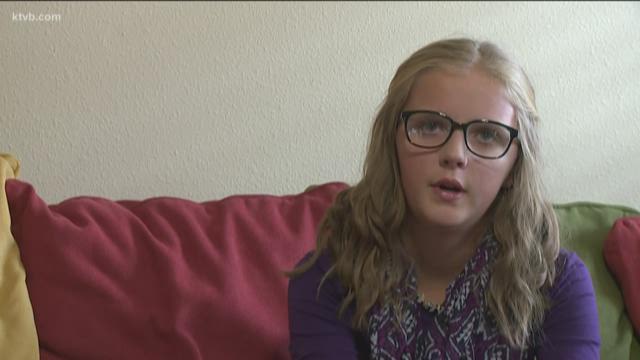 A 14-year-old girl in Middleton spent all-day Tuesday raising awareness of domestic violence in hopes of preventing it from affecting so many women and children.

According to Domestic Violence Statistics, a woman in the United States is beaten or assaulted every nine seconds.

Rya Johnson hopes to change that after her family survived domestic violence.

Instead of having a party on her 14th birthday, Rya organized a "Purple Day" at Middleton Middle School to spread awareness about domestic violence.

Rya witnessed domestic violence when her mother was abused.

"I was in an extremely violent relationship for about eight years with her biological father," Stephanie Johnson said. "I was beaten and stabbed and lit on fire and tied up in a crawl space and she was present for a lot of it. She used to throw her tiny little body in front of me to try and protect me, so we really survived a lot together, so it means the world for her to take that and turn it into this."

"One time she tried to get away with me and he dragged her back in the house and he tied her up in a closet with a jump rope so that we couldn't get away," Rya explained.

Rya and her mother have since put that horrific chapter of their lives behind them, thanks to the help of law enforcement. The mother and daughter are now both advocates for the Man Up Crusade, a non-profit organization that takes a stand against domestic violence.

"I would've never expected such a tragedy to turn into such an amazing thing," Johnson said.

"I think about where we are now and our amazing life we have and it's an amazing thing that we went through it and we're happy now and we don't have to worry about getting hurt or being scared," Rya said.

The 14-year-old's efforts also inspired The Idaho Elks Children's Pavilion at St. Luke's Medical Center. They had their own "Purple Day" on Tuesday as well.