As with anything new there's excitement, but also concern, surrounding Lime's brand-new addition to the Gem State. 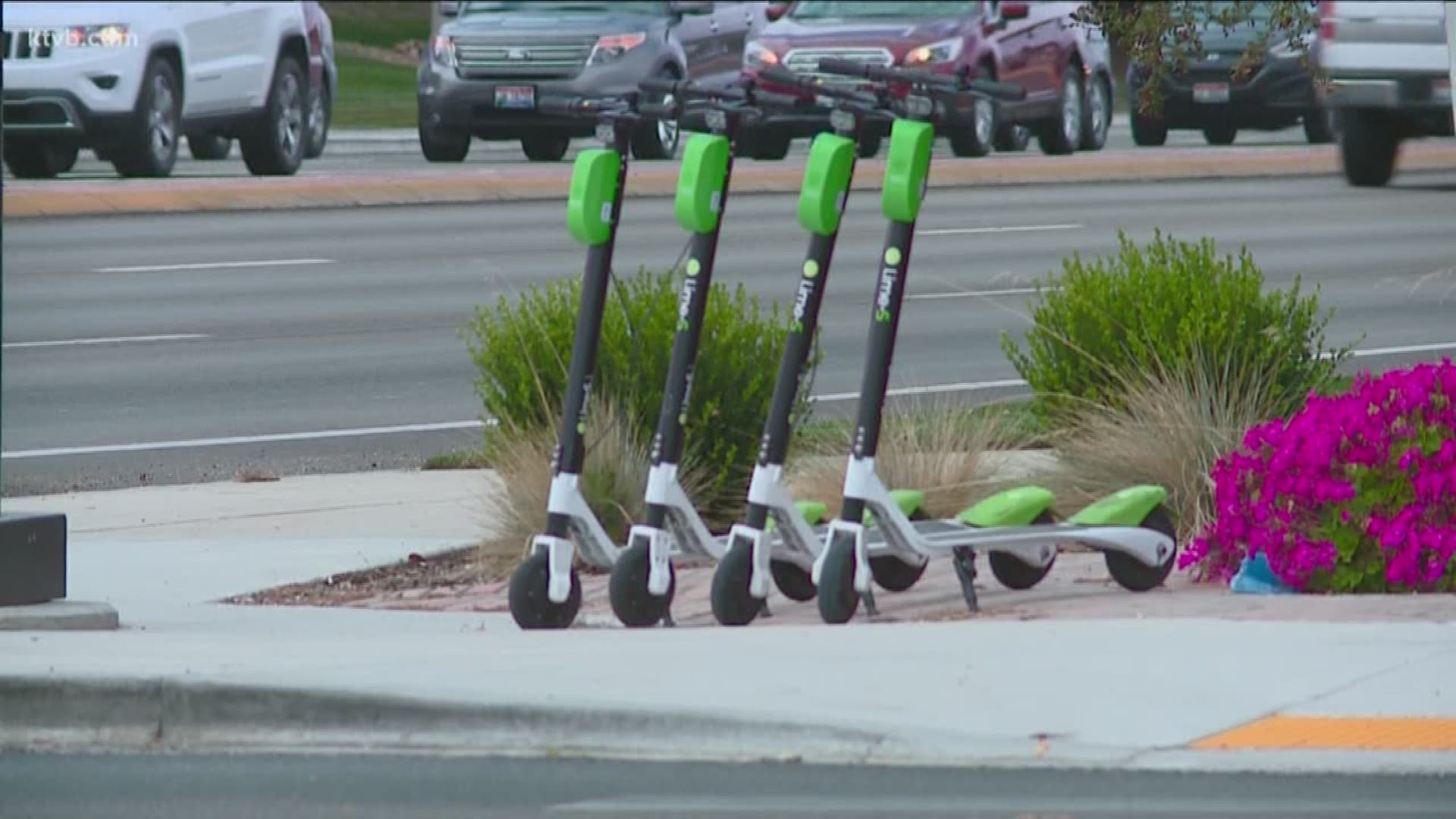 MERIDIAN — Have you seen those white and green electric scooters out on the streets of Meridian?

The shared scooter, bike and electric transit vehicle company Lime, formerly LimeBike, rolled them out September 27. As with anything new, there's excitement but also concern surrounding this brand-new addition to the Gem State. That's why the City of Meridian has asked the company to take them off the streets.

The dockless scooters cost $1 to start and 15 cents for every minute you're using it. GPS technology and a phone app track them. But there's quite a bit of confusion over where you can ride and park them.

"As with any technology that's new or anytime something is new or different you're going to find people who are really excited about it and passionate about it, and you're also going to find people that are inconvenienced,” Meridian City Council member Luke Cavener told KTVB.

They're a fun, new way to get from Point A to Point B, while reducing dependence of cars and leaving a smaller footprint. Transportation technology making waves across the U.S. is finally splashing in Meridian.

“What I really like about the Lime concept is that it provides affordable and accessible public transportation that doesn't require taxpayers to subsidize it,” Cavener said. "This is a for-profit company that found a niche within our community and if they can be safe I really want them to be successful."

"We've told Lime we're happy to try to work with them and try to make this a successful program because we do think it can be useful. But it has to be done the right way. And unfortunately that's not what happened,” Meridian City Attorney Bill Nary told KTVB.

Meridian has a two-year pilot program agreement - a Memorandum of Understanding (MOU) with California-based Lime, allowing them to put scooters only on city-owned properties like Meridian City Hall, parks and pathways.

Just days after roll-out, the city is concerned, and asking Lime to scale it back.

First dropping from 200 to 100 scooters and, now, Meridian is wanting them off the streets entirely until it's done right. Nary says the Meridian City Council will be updated on the electric ride-share scooters on Tuesday and must then figure out how to move forward and give proper direction.

“We have asked them to pull back on all of these scooters until they actually follow through on what they committed to do in educating the public and operationally getting permission from property owners on where these could be,” Nary said. "We've asked them to take them all away and work through this plan as they had originally proposed. And we would help and work with them to do that. But as it is, trying to do it while they're still operating it in the same manner is going to be very difficult to do."

We heard from a lot of people on social media who are pumped about these, but some are confused and need clarification.

“The biggest issues we need to be focused on is not impeding ADA access. We also want to make sure we are not getting in the way of pedestrians and really it's a safety issue as well,” Cavener added.

To clear up confusion: In Meridian, Lime scooters go on the streets because they're electric. They are NOT allowed on the sidewalks in Meridian.

Nary says you can get cited if you're riding them wrong and the city can charge Lime if scooters are parked in the way.

“We think it's important to give Lime the opportunity to address the concerns but if they're unable to meet the needs of our community we have the ability to terminate our MOU," Cavener said.

"It certainly could be something that could be useful to people: they could also use them for transportation or for fun. They just have to do it in safe way,” Nary added.

Alex Youn, a spokesman for Lime, says they're dedicated to constantly working with the city and focusing on community engagement and communication. They recognize there's a lot of education that goes along with the new scooters.

"We've rolled back at the city's request and have focused on robust community engagement," Youn said over the phone on Monday.

The City of Boise expects two companies to roll out electric ride-share vehicles, such as scooters or bikes, by the middle of October. The city spokesman says Boise created an ordinance for them and they'll operate like bikes there.