Two men, who live more than a thousand miles away from each other, met for the first time on the Main Stage at Treefort Music Fest. Their inspiring friendship was made possible thanks to a simple act of kindness. 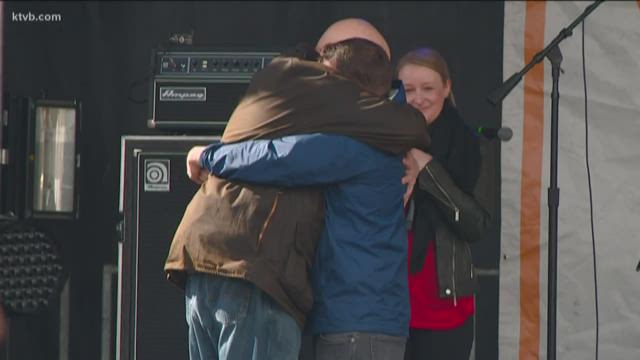 BOISE - As the annual music festival that draws thousands to the City of Trees comes to an end, a lifelong friendship is just beginning.

Two men, who live more than a thousand miles apart, met for the first time Sunday afternoon on the Main Stage at Treefort Music Festival.

The emotional meeting was only possible because of a simple act and the slogan, "Swab your cheeks and you could potentially save a life."

"It's my personal belief that it is our only job in this life to take care of each other," Glenn Thornton said.

When Thornton swabbed his cheek at the booth for DKMS, an international nonprofit organization dedicated to fighting blood cancers and disorders, he didn't know the impact it would have on his own life.

Two years after the swab, he lost his two-year-old son Errol in a tragic accident and felt he lost control of his life.

"My wife and I were grieving the loss of our son," he said.

As Thornton and his wife were approaching their first Christmas without Errol, he received a call saying he was a stem cell match for a man in Indiana named Todd Irwin who was in desperate need. That call would eventually lead to a friendship.

"Right when they got done, they stuck the bag of stem cells in a cooler, sent it overnight it to Todd, put it in Todd and now we call each other blood brothers," Thornton said.

Turns out, he was a closer match than Irwin's actual blood brothers.

"It was not only a match, but it was a very close match which is imperative to the success of the transplant," Irwin said. "I kind of joke around like it was the best oil change I've ever had. When I called Glenn and we talked for the first time I obviously thanked him for saving my life and he said, 'no, you saved my life.'"

Throughout his darkest days, there were times when Thornton wished he didn't wake up. He says he was away at a treatment center when his son died.

"I was having this whole struggle with a substance abuse problem and I wanted to get better and be a better dad for my son and for him to be taken away from me, I felt so ripped off," he said.

Since the call from DKMS, he's found a new purpose, through the Errol Conrad Thornton Foundation, in honor of his son's life.

"Please get on that registry because it can change your life as a donor, not just as a recipient but as a donor as well," Thornton said.