Hundreds of law enforcement officers from across the Treasure Valley and state gathered at Taco Bell Arena Tuesday afternoon to remember Jardo - the Boise Police K-9 who died last week after he was shot while helping to take down a suspect. 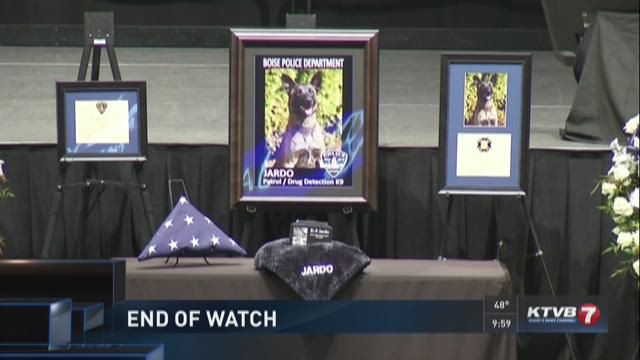 Hundreds of law enforcement officers from across the Treasure Valley and state of Idaho gathered at Taco Bell Arena Tuesday afternoon to remember Jardo - the Boise Police K-9 who died last week after he was shot while helping take down a suspect.

By the end of the service there was not a dry eye in the room.

It started with a procession of local K-9 officers and their handlers, and concluded with Jardo's "End of Watch" announcement over the police scanner.

This final goodbye for the community, and for law enforcement, was an emotional one.

To see so much support from the hundreds of people and officers who came to Jardo's memorial just proved what a special dog he was."

"He was a dog that was born, bred and lived to be a Police K-9," Jardo's handler's brother, Officer Justin Williams, told the audience Tuesday afternoon. 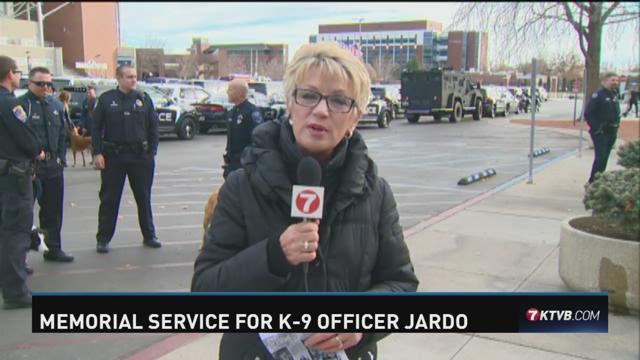 Boise Police Chief Bill Bones said a team of officers, people from Boise State and volunteers put in countless hours to put this beautiful memorial on.

"It is incredible to look out across all those faces and to know that they care for Jardo, they care about their fellow officers," said Bones. "Like I said it's been a really, really tough couple weeks, but to have that kind of support in the room and you can see everybody out here just feels better having been in there."

Jardo died five days after he was shot, but police officers thank those veterinarians and medical staff who worked tirelessly to save his life, and give him that bit of precious time with his family.

"Jardo lived as a hero, died as an absolute hero, and he will forever be remembered as a hero," Boise Police K-9 Officer Marshall Plaisted said. "Jardo was a dog all of us tried to aspire our own dogs to be."

Bones says Jardo ultimately gave his life saving the lives of his fellow officers - and for that he is deeply thankful.

His death is a stark reminder of the risks these officers face in their daily service for the community. That fateful night when Jardo and two other BPD officers were shot and wounded, staff at WestVet Animal Hospital, and K-9 veterinarian Dr. Nell Dalton came to the rescue.

"Your tireless efforts to save Jardo's life in a caring and compassionate way brought peace in the hearts and minds of our K9 unit," Officer Plaisted told them.

"We trained and drilled for this and hoped we'd never have to do it," Dr. Dalton said. "But it was able to be done and treated immediately."

Veterinarians were confident Jardo would make a complete recovery because everything with his initial injury from the bullet was not an issue, and his wound was healing.

But just days after he was released from the hospital, another unexpected event happened. Dalton was the liaison between police in the waiting room and the medical staff; she was in the operating room the night Jardo took his last breath.

He suffered from what she believes was an aneurysm on his heart - an injury she says can't be detected.

"With those vessels there was a weakening and so there was a bulge, and with his just being a dog, that ruptured and it was catastrophic," Dalton said. "It was awful."

K-9 handlers at the memorial could relate to the loss of Jardo; they say these dogs are more than police dogs. they are apart of their families.

"There may not be any criminals to chase in heaven but I'm pretty sure he's looking around just to make double sure," Chief Bones said in closing.

After remarks, there was a standing ovation as the chief gave the Williams family the K-9 Medal of Honor that Jardo earned sacrificing his life in the line of duty.

As for Cpl. Kevin Holtry, one of the officers who was shot and injured in the shootout, we got word this afternoon that he has been upgraded from serious to fair condition at Saint Alphonsus in Boise.