Strength of Hope couldn't explicitly say who the giant retailer is, but their website lists CVS as a retailer supplying their hemp extract products. 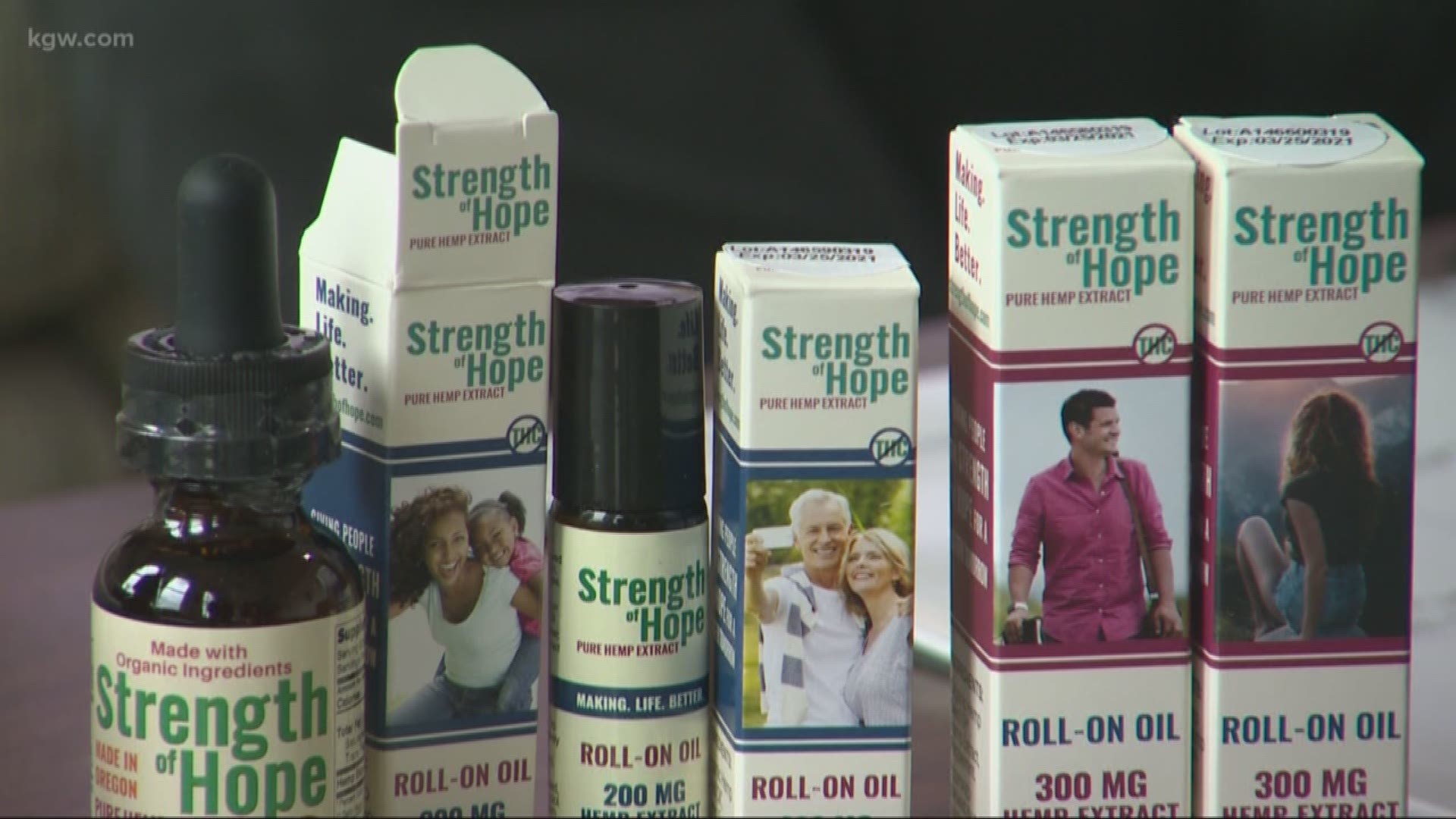 TIGARD, Ore. — A Tigard CBD startup is hitting the big time, with products landing on shelves across the country after they scored a big deal with a major retailer.

Strength of Hope couldn't explicitly say who the giant retailer is, but after digging around and checking out their website we discovered it's CVS.

However, no Oregon CVS pharmacies are currently carrying their products.

“We're growing really fast. So we just have to keep up with it,” Strength of Hope vice president Alex Rullo said.

About a year-and-a-half ago, Rullo's mom and stepdad came to him about starting a new company.

“I didn't know anything about CBD at the time and I was a financial advisor for seven years and I was getting out of the industry and I decided I wanted to do something different with my life,” Rullo said.

He wanted to do something he and his mom Sheri Cunningham, now the company president, felt could help people.

When a friend of the family was diagnosed with cancer, they gave her a CBD (Cannabidiol) oil product to test to see if it helped relieve her symptoms. CBD is a cannabinoid naturally occurring in cannabis plants.

“I sat down with her and she said, ‘It's given me some of my strength back and it gave me hope for tomorrow.' So, I came up with the brand name Strength of Hope,” Rullo said.

Watch: CBD: What is it? Why do people take it? Who regulates it?

Tigard-based Strength of Hope makes CBD products designed and marketed as an alternative to alleviate pain and symptoms. They sell 14 products and plan to launch three more in May. They currently sell items such as oil tinctures, emolium balm, mints, and the roll-ons sold in CVS.

Few scientific studies have been done on CBD and its effects, and the FDA has only approved one drug containing CBD, Epidiolex, for the treatment of two epilepsy disorders.

The company linked up with a Colorado distributor and got in front of retailers. A major one – CVS – bit once the Farm Bill passed in December 2018, providing a path forward for industrial hemp.

“January through March or so we worked really hard to get to that point. And we’ve created quite a company,” Rullo said. “We’ve passed with flying colors on all our testing to prove that we are quality and we stand by it.”

Companies like Strength of Hope are required to submit a Certificate of Analysis to retailers that includes lab results testing for purity and cleanliness of their products.

“It's an exciting adventure. I think there’s a lot of opportunity. Obviously we need more science behind it but there’s a lot of growing evidence showing how powerful CBD can be to help so many people,” Rullo said.

The company is expanding operations inside their warehouse in Tigard. They will add more product to store inventory for local and online sales, they plan to transform their fulfillment center, and expand their R&D.

“The 60,000 units the major retailer wanted, we could handle that volume. But we’re thinking bigger and so we had to realize if we were getting 200,000 to 500,000 units a month, we had to expand very quickly,” Rullo said. “We expanded very quickly. We had to find another manufacturer to help us with demand, so we went out and found a manufacturer that could help us grow, and we’re constantly adding more manufacturing facilities to keep up with the demand.”

In the very near future, Rullo expects to be in more major stores and they could be churning out up to 500,000 units monthly within the next few months.

Strength of Hope has facilities in Oregon, and all over the country. They have about 15 employees and investors helping out regularly and expect to boost their staff to 30 by the end of the year.

When asked if he saw his life here a few years ago, Rullo said absolutely not.

“I had a whole different idea and direction and I'm thrilled at how it's turning out.”