Man with tumor on his face seeking community's help

One man is asking the community for help to fund surgery that would remove a large and painful tumor from the right side of his face. 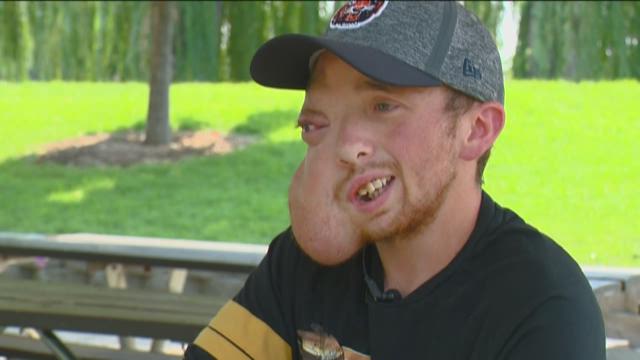 A Nampa man says he is extremely burdened, living every day with a rare and painful tumor on the right side of his face.

For years doctors said the tumor was inoperable because it continued to grow as Lucas McCulley grew.

Now that he's an adult, there's a chance to get the growth removed, but enormous financial restraints are holding him back.

“I was born at Mercy and they life-flighted me at two days old to Salt Lake City and they had never seen any case like it before I got there,” says McCulley.

Undetected throughout pregnancy, McCulley was born with a lymphangioma tumor on the right side of his face.

He had 24 surgeries before the age of 10, his last one nearly killed him.

“I bled out and was in the hospital for a really long time,” says McCulley.

McCulley says after that doctors opted not to do anymore procedures until he was an adult and the tumor stopped growing.

At age 18, McCulley's physician said his tumor was operable but it would be pricey to remove without insurance, which McCulley lacked.

He tried to get disability, which he would qualify for with Medicaid, but was rejected.

“I’m in pain from the moment I wake up and right until I go to sleep," says McCulley. "That's the problem, you can’t prove pain, anybody can say they are in a bunch of pain but can’t prove it. They said that my vision is fine, I’m good enough to go work in the back of a place."

McCulley is now turning to the community for help.

“It would mean the world obviously, I don't really mind the whole being different part because everyone is different in their own way, it’s kind of a unique part of me it has made me who I am," says McCulley. "It would still be something that is so brand new to me, and make my life a lot better in every aspect of the day, just so I don't have to worry about it, I don't have to wake up hurting or anything like that and just be normal. Both my mom and my dad it’s their life goal to see that taken care of and to see it gone and the burden off me.”

But it's only part of McCulley's life goal.

Removing this tumor would clear him to join the military.

“I should be able to live a normal life, do what I want to do because I have always wanted to join the Army, but I can't do that unless I can put a gas mask over my face," says McCulley. "I have talked to recruiters about it and that’s what they have told me, I can’t do it unless I can fit into a gas mask.”