It's a project that would have cost the food bank more than $10,000, but Idaho Roofing Contractors is covering the costs. 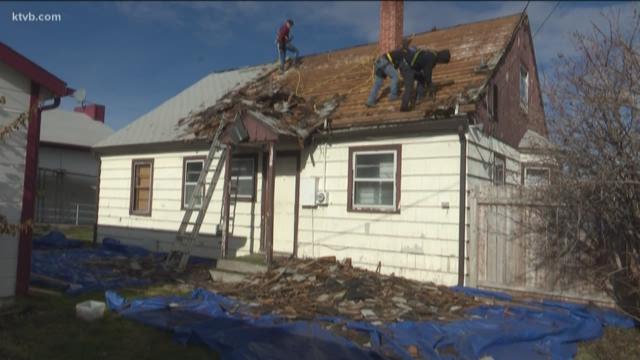 A local roofing company is donating a new roof to the Meridian Food Bank.

It's a project that would have cost the food bank more than $10,000, but Idaho Roofing Contractors is covering the costs.

"We just want to help out the community,” said Corky Kopp, sales manager for Idaho Roofing Contractors. “We feel blessed in the projects we've been able to do throughout the valley and we wanted to help out with a company that's such a good cause like the Meridian Food Bank."

It’s a much-needed project. The current roof is in disrepair and leaking. That’s making parts of the building unusable and has the potential of causing even more damage.

"A lot to the drywall, a lot to the products that they have stored in there. Basically, talking to them, [I] feel that if it didn't get done they wouldn't have the place for the storage,” Kopp said.

"We'd probably have to take it down,” said Meridian Food Bank Executive Director Dan Clark. “Then we'd really be in trouble because then we'd have to buy something, you know, or rebuild because we need the storage."

The building is where they keep donations and food for the backpack program. The Meridian Food Bank teams up with the West Ada School District to provide food insecure children with meals on the weekends.

"Two dinners, two breakfasts, two lunches and some snacks, that sort of thing, to get them through the weekend," Clark said.

The food bank provides these every weekend in the school year at the request of school counselors. Clark said each school year they provide about 20,000 of these meals to kids.

"The fact that we can now use it instead of just hiding out in different rooms that don't leak,” Clark said. “It's going to be a win for us."

A win because the backpack program can continue and the food bank doesn't need to spend the money that would otherwise be used for food on a building.

"I just really want to thank them,” Clark said. “A lot. They've been so kind, so generous…this is great."

This project is expected to take about a week.