While some officials refused to comment on the matter, others were outraged. 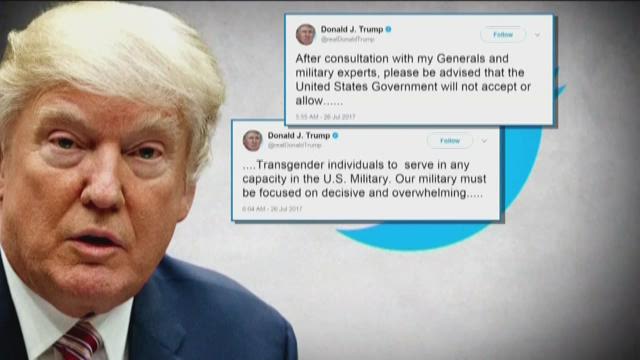 This morning President Trump took to Twitter announcing transgender individuals will no longer be able to serve in the U.S. military.

The decision reverses a policy set in motion by President Obama, which allowed transgender troops to serve openly.

“This is a slap in the face and a hurtful act for transgender troops in our military who have been serving our country honorably and effectively,” says Steve Martin, a regional officer for the Pride Foundation.

A 2016 RAND study calculates between 1,320 and 6,630 transgender men and women already serve in active duty.

It's unclear how this ban will affect these existing troops and if Trump must sign documents to make this new policy effective.

“This message that the commander and chief just made clearly does not acknowledge the contribution and support that military have pledged their allegiance to our nation and protecting our freedom and liberty,” says Leo Morales, Executive Director of Idaho’s ACLU.

According to the president's tweet, transgender individuals will not be able to serve in the U.S. military in any capacity.

The Commander in Chief cites "tremendous medical costs" and "disruptions" for his reasons.

“Any heath care additions that he is talking about are incredibly minimal, its another excuse to validate a discriminatory attack,” says Martin.

Senator Jim Risch shared this statement saying "The U.S. military is charged with the important and difficult task of defending our country. How that is best done and how they deal with issues that could affect readiness or execution is up to the military experts. The Commander-in-Chief, and his national security team, are in the best position to make these decisions."

Idaho's other delegates could not be reached for comment.