Protests in downtown Boise wind down after a largely peaceful night 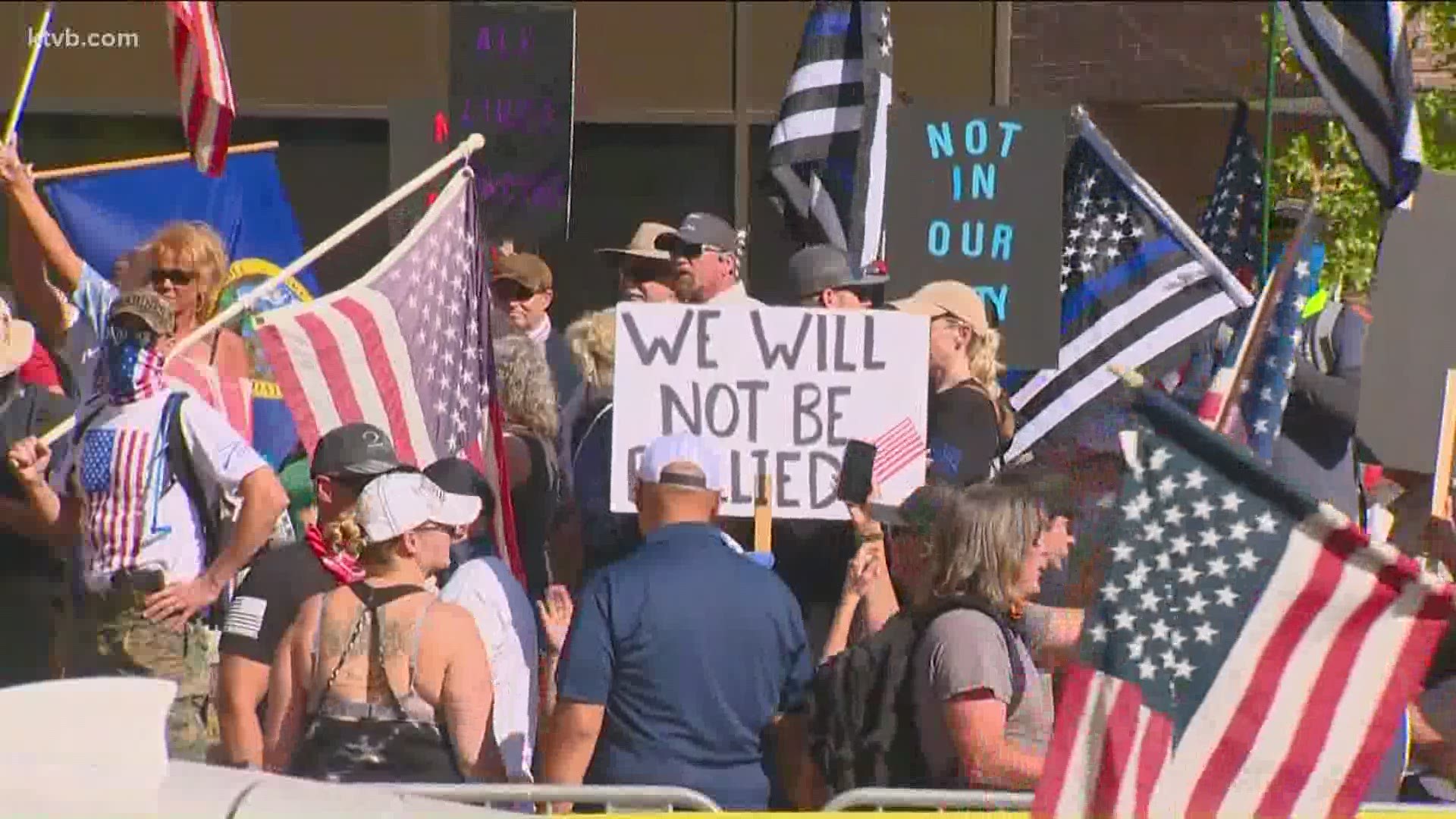 BOISE, Idaho — Before Tuesday's protests began, Boise Police Chief Ryan Lee met with the media for a briefing on how the department would be handling them.

Hours later, the two protests began to form. As the night went on, it became clear that these protests weren't as large as the June 30 protests or the massive Black Lives Matter vigil at the capitol building.

But like those earlier events, some people remained in the downtown area late into the night, with police keeping a close eye on the situation.

A few people on each side of the street still here, loud USA chant as more people appear to be heading home. That should do it down here! A few will likely hangout later pic.twitter.com/FGXbXDOJZr

As the protests began to thin out, Lee held another briefing at 9 p.m., where he thanked everyone who attended the protests for being peaceful and respectful.

"It has been a mostly peaceful event," he said, adding that officers intervened in several "tense situations."

According to Lee, two people were arrested on resisting/obstructing charges after they jumped over a police barrier at city hall. Police are also investigating reports of an aggravated assault and aggravated battery in the area during the protests. Suspects in those cases have been detained, Lee said.

He added that officers would be staying on the scene into the night, and would be conducting directed patrols in the downtown area.

"We appreciate those who chose different venues to express their opinions," Lee said. "It made the crowds much more manageable in size for those who wanted to exercise their First Amendment rights.

"Thank you also for anyone who came from outside our city and adhered to the Boise way of being gentle and respectful to each other," he added.

One of the two gatherings - a Black Lives Matter rally - was held Boise State University's B Plaza. A KTVB photographer on the scene said there were between 300 and 350 people there.

The rally was originally scheduled to take place in front of City Hall, but organizers said the event was moved to Boise State to avoid having their message drowned out counter-protesters, and over concerns of more violent confrontations like what happened at the June 30 protest.

KTVB's photographer left the rally at about 5:15 p.m. and said the group was beginning to disperse. At around 7 p.m., some BLM protesters moved to City Hall and Boise Police officers got in between those protesters and counter-protesters.

At roughly 5 p.m., about 300 people were in Cecil Andrus Park to counter-protest the BLM rally. Many were seen waving American flags, "TRUMP 2020" flags, and the thin-blue line flags.

At about 5:30 p.m., the group moved to Boise City Hall in areas that Boise Police designated for protesters.

Police used guardrails and police tape to designate areas for protesters from both sides of the issue, with an open space for police in between the groups.

Both gatherings were largely peaceful, with some shouting matches between protesters.

Opposing groups yelling at each other across Capitol. Definitely intensifying pic.twitter.com/JkGUrlbq1L

Earlier in the day, both Chief Lee and Mayor Lauren McLean made statements about Tuesday's protest.

"As I've said before, there will be a number of police officers down here who will be able to respond to any acts of violence or destruction of property," Lee said.

He added that police responded to a suspicious package in downtown Boise earlier in the day and found that it wasn't dangerous.

Boise's new police chief also debunked some social medias claims, including rumors that bricks were being dropped off around town.

"It sounds like there's some sort of effort going on to spread misinformation about what is happening already in Boise," he said.

"I want to reiterate that while I, and we, as a city, fully and whole-heartedly support everyone’s right to peacefully assemble and protest, we will not tolerate violence of any kind, and will hold those who incite it accountable," she wrote.

She added, "I welcome all Boiseans to review the agenda for tonight’s [City Council] meeting and participate virtually. I look forward to the opportunity to hear from community members about your priorities and vision, and to focusing on the task at hand."