Both men served in the military, both drive red convertibles, and both repair clocks, zippers and upholstery in their shops to pass the time between customers. 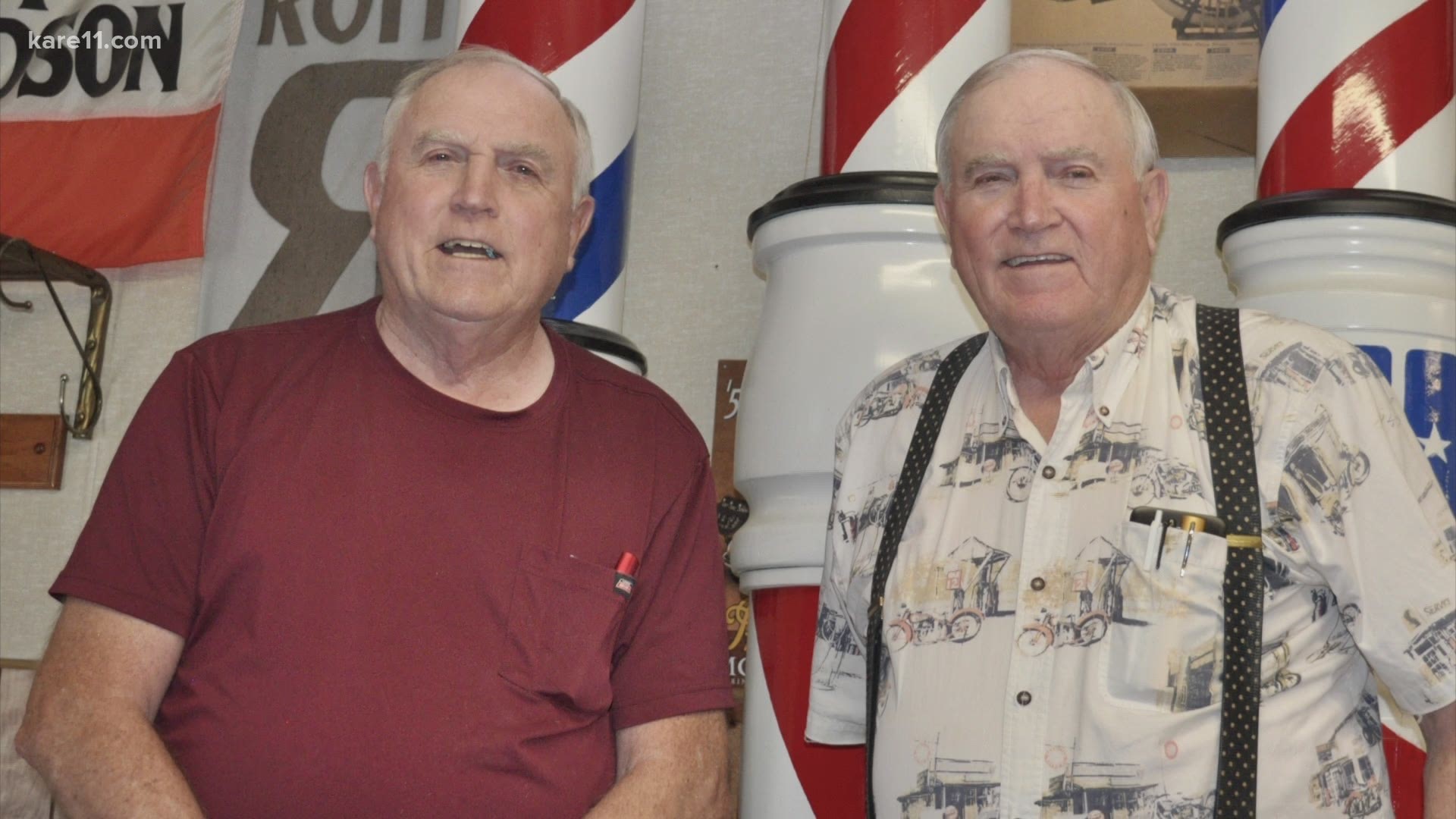 This story originally aired in 2016

CHATFIELD, Minn. – Forty-nine years ago Roy and Ray Lange made a decision that has positively affected the grooming of a couple generations of Fillmore County men.

The twin brothers were grinding pistons in a factory, when they decided together to seek a cleaner occupation. Ray suggested barber school.

Next January, the Lange twins will mark 50 years of barbering, Roy at his shop in Chatfield and Ray 20 miles down the road in Spring Valley.

“I could have retired a long time ago, but what would I do?” asks Roy as he clips hair. “I mean, this is my place to hang out. I love being with my wife as much as possible, but she needs a little space too.”

That pronouncement, and nearly every other Roy makes, is followed by a prolonged hearty laugh – a delightful trait he shares with his twin brother.

“I’m what you call the original twin,” says Roy. “I was born first.”

“I shoved him out,” responds Ray from his own barber shop. As usual, laughter ensues.

After graduating from barber school in St. Paul, the Lange brothers purchased their shops, from retiring barbers, on the same day.

Still, business is currently brisk as longtime customers have come in for spring haircuts. “A lot of ‘em, when they come in here I pick on ‘em,” Roy laughs. “I always say, ‘Well here comes Grizzly Adams. He’s in here to get slicked up.’”

Roy and Ray Lange (left side of photo) at barber school in St. Paul in 1967

Roy and Ray were born the 10th and 11th children, in a family of a dozen kids.

“The doctor said to my dad, ‘Don’t be in a big hurry, Harry, I think there’s another one in there,” laughs Ray. “That means I was coming out.

The twins weighed four pounds each at birth. Ray says their mother put them in shoe boxes and warmed them by the stove.

Both men served in the military, both drive red convertibles, and both repair clocks, zippers and upholstery in their shops to pass the time between customers.

Both also have an affinity for black walnuts that could put to shame an ambitious squirrel. Roy owns two nut cracking machines, while Ray carries his nut cracker between home and work.

Roy Lange (right) shares a laugh with a customer in his barber shop in Chatfield, Minnesota

“Some people go to a football game and the Lange brothers we’re harvesting walnuts,” laughs Roy. “You can feel good about yourself at the end of the day that you cracked some walnuts.”

Neither twin expresses much interest in retirement.

“There’s a barber in West Virginia, he’s 106-years-old and he’s still barbering,” say Ray. “So with that challenge we’ve got 34 years to go yet.” The laugh that follows is one of his most spectacular of the day - a work of art, really, as laughs go.

The Langes’ commitment to keep going should come as good news to the twins’ favorite customers: each other.

Every few weeks they meet either in Chatfield or Spring Valley to cut each other’s hair.

“We’ve never paid for a haircut in the last 49 years,” says Roy.

Ray works up another laugh then adds, “We always keep the money in the family.”