Like much of Idaho, Kuna is seeing a lot of growth and its school district is having to expand to keep up. 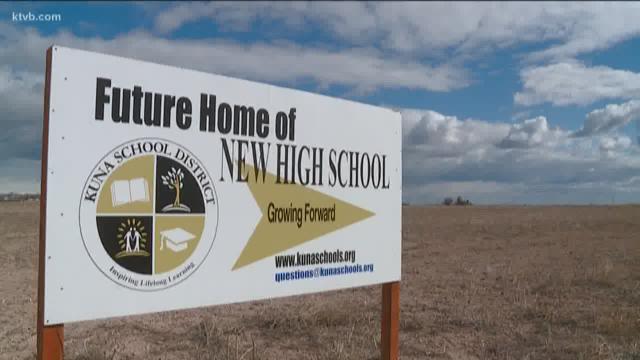 KUNA, Idaho — Continued population growth is noticeable throughout Gem State, and Kuna is no exception.

What was once a sleepy bedroom community is now booming with new construction.

“We’re growing by about 500 homes a year,” said David Reinhart, director of communications for Kuna School District. “Kuna has grown gradually over the last 10 years. It’s doubled in size in the last 15 years – there’s a pretty steady growth in the area.

"The people see it as a desirable location to live because it’s a smaller town atmosphere but you still have access to [Boise] and so it’s a desirable place to live,” he added.

Like many other school districts, Kuna has had to pass bonds and levies to help keep up with student growth.

On Tuesday night, voters passed a levy for $2.5 million each year over the next two years. It required a simple majority, and passed with 56 percent of voters giving their approval.

“The levy was addressing what we see as a crisis in our classrooms. The classrooms are overcrowded," Reinhart said. “So this levy will let us hire additional teachers to help minimize that. It also allows us to buy language arts curriculum, musical instruments and science curriculum and continue our safety improvements in the district.”

According to Reinhart, nearly 90 percent of school districts in Idaho carry a levy because it helps solve the gap in funding that the districts don't get from the State Department of Education.

In Kuna, some of the district's growth happens mid-school year so there's no extra funding readily available to accommodate the influx of students.

That's where levies come in.

In 2017, the school district also asked voters to pass a $40 million bond to build a third high school. Voters passed that with a supermajority, or two-thirds approval.

“We need a new high school frankly because the current high school is overcrowded and we anticipate that we will need to expand that new high school," he said. "We’re only building phase one with this bond and as population grows, we’ll be gauging that growth.”

Phase one includes space for 500 students, as well as several new career and technical programs.

Reinhart said other phases will be added to the school as growth necessitates.

Tuesday night, that high school was given a name, chosen by feedback from the public. The new high school will be called Swan Falls High School and will open in fall 2020.

Reinhart said Kuna expanding the way it is definitely comes with some growing pains, but he says he is thrilled the voters continue to support the district.

“Several votes in a row now that they’ve passed, it really speaks highly of our residents, it speaks highly of the culture that’s being created here, it’s pro-students, pro-schools and that makes for a better environment for everybody,” he said.