The couple and their one-year-old son, Uriel, were trying to escape the Cold Springs Fire when they were overcome by flames. Their son and unborn child died. 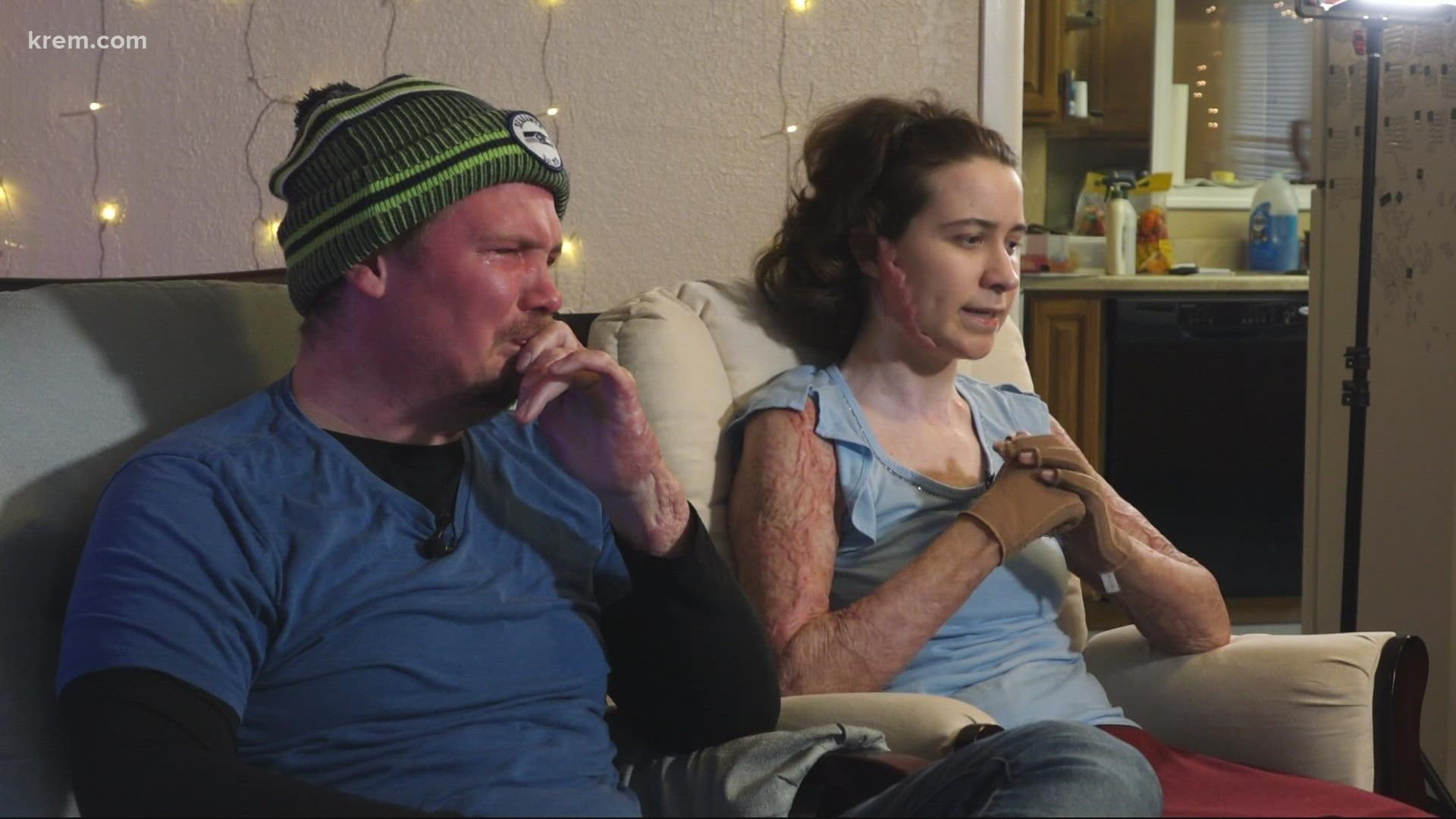 OKANOGAN COUNTY, Wash. — The lives of Jacob and Jamie Hyland were fundamentally changed over Labor Day weekend 2020 when tragedy struck the couple and their child during a getaway to Okanogan County.

The Hylands and their one-year-old son, Uriel, were trying to escape the Cold Springs Fire when they were overcome by flames. Their son and unborn child did not survive. Jacob and Jamie have both undergone nearly a half dozen surgeries each and continued their recovery at Harborview since 2020.

The area of Okanogan County where their family property was located is underdeveloped and completely cut off from technology. That means there was no way for the Hylands to call for help when the fire tore through that spot.

Jacob and Jamie had not been back to the area since that day more than one year ago. But they did let KREM 2 visit the spot to see firsthand what happened and help tell their story.

Here is part one of KREM's full interview with the Hylands.

Jacob said he realized a fire was burning upon exiting the family's tent to use the restroom in the middle of the night. He saw a piece of ash and an "orange hue" to the sky above.

"You can kind of hear the rumbling of the fire at that point. I ran back and I'm like, 'Jamie you got to...like we got to go,'" Jacob said.

"We had three different options. We could try and hide in the Quonset hut but we thought we'll probably turn into toast in there. We could try and go back up the road, but that was really the direction the fire was coming from so we decided not to do that," Jacob explained. "The third option was to try and get to the river, so we hopped in the car with our son and and zoomed off as fast as we could."

The area was dark, and the ground was uneven and dangerous. The Hylands hit a rock as they were driving, stopping the car in its tracks.

"We all recovered pretty quick. Jacob punctured his lung," Jamie said. "I didn't realize. I had no clue...the adrenaline.

The family had no choice but to get out of their car and run. Once they got into the valley, the couple found a dry creek bed that they described as "treacherous" and ran through it in the middle of the night.

The winds were strong that night. It's estimated that the Cold Springs Fire was moving 50 to 60 mph. When it became obvious that the family could not outrun the flames, they took shelter up against a rock face and got as close to another as they could. Jacob and Jamie formed a small shelter around their child and prayed.

"When the fire first came, I'm looking at it, it's like right there. And it was like I thought we were going to make it to the river. I didn't think everything was going to end like this. And then the flame was there," Jamie said. "And it was, you know, it hurt and everything. But it was like, oh, okay, I'm going to die. …My little family is about to be in heaven."

But the flames moved away from them and they were safe for the time being. Jacob and Jamie remember sitting together for what may have been 20 minutes, talking and praying for wisdom. That was when they decided that they were going to try to get to the nearby Columbia River.

Jacob and Jamie believe it was likely the smoke that led to their baby Uri's passing but he also suffered some burns.

"I remember just Jacob's voice as he held him close and said, 'I'm sorry. I know it hurts. I'm sorry,'" Jamie said. "And every now and then he would open his eyes and look around, look up, and then kind of go back to sleep again and he started to look a little bit glazed over before he fell asleep."

Jacob and Jamie were well past the point of exhaustion but they kept moving forward because they needed to get help for their baby boy.

"We kept forcing ourselves to get up and go because...his life is hanging in the balance," Jamie said.

Finally, the family made it to the Columbia River but reached a cove that was impassable. Jamie said they were trying to find a way to climb but their hands were too destroyed from the fire. Their only other option was to swim, which didn't seem feasible because they would need to carry their son.

"And then Jacob said, 'I think he's dead.' So we went back to the shore and we looked and there was just a little bit of breath left. He was barely alive," Jamie said. "So we all laid down and cuddled together and held him close and whispered a blessing in a sendoff. We told him that heaven is a good place and Jesus loves children and we'll see him there sooner or later and we all three fell asleep together. And when we woke up, he was gone."

Jacob and Jamie overcame the odds and miraculously survived.

"And the first night the wind the wind was so bad. It was so cold and I was just shivering...and I tried to stop shivering because I was like, the more I shiver the more it feels like I'm having contractions and and I don't want to lose another baby here."

Unfortunately, Jamie lost her second child that night. She recalled the moment when she realized she was having a miscarriage.

"The feeling was similar to the feelings of giving birth. And so I knew that couldn't be good," she said. "But I mean I couldn't stop it and so we lost her, our unborn child, too."

But as much as Jacob and Jamie's story is about unimaginable pain and loss, it's also about faith.

"There was just this awareness that we're not alone and God is with us in this moment," Jamie said. "He was with us in the fire and we don't know what's next. But no matter what happens, He's with us right here."

Jamie said her husband was "doing everything" to take care of her.

"Our hands didn't work. But I remember him like kicking the gravel over me to keep me warm," she said.

The couple said they kept praying for God to send them a boat or take them to heaven. After two days and two nights on the banks of the Columbia River, those prayers were answered. A boat came to rescue the couple and two men brought them to an ambulance.

Jacob and Jamie were immediately rushed to the hospital in nearby Brewster, Washington and then airlifted to Harborview Medical Center's Burn Unit in Seattle. The next 28 days in the hospital were a blur of surgeries skin grafts and deep waves of grief.

"This is something way, way beyond a physical pain. It's like a separation of love," Jacob said.

Here is part two of KREM's interview with the Hylands.

Then, Jamie found out that she could never have children again.

"I've wanted to be a mom for so long and then I finally got to be with the most perfect child ever," she said. "But...I'm not just a woman hoping to be a mom someday. I am someone who has experienced motherhood and then had it taken away."

But even in the agony of their loss, the couple believes there's a reason they survived. Now, they are moving forward with a new plan: trying for another baby through surrogacy.

"If I'm here on earth to do anything, i's to be there for the growing and the experience of of life. To be a dad," Jacob said.

Jamie also described the emotional turmoil tied to their decision.

"There's moments when my emotions are like, 'Do I even want more kids because they won't be him,'" Jamie said. "But it's like recognizing that, okay, I will always miss him. But there's also the role of being a mother and the love of a mother and that I can give to someone else."

"That's why I hope we have kids because...I want to love again. My son was everything, the light of our world. He was everything!" Jacob said.

The couple's faith is leading the way just as it has since their life changed forever last year.

"Even after your body is destroyed, and your heart is crushed. And like, the only thing you have left is somebody to hold your hand...life still goes on, the birds still chirp, the sun still rises," Jacob said.

"Just because this pain takes up my whole heart doesn't mean that there's not room for my heart to expand and grow and be filled with more things, too," Jamie said.

The couple has created a GoFundMe to help with their surrogacy process, which has raised almost $5,000 out of a $105,000 goal. They are asking for help for two pregnancies. Jamie is also sharing more about the journey in an online blog.