'It's not right': Ammon Bundy, health officials share differing views on confrontation at board meeting

A public meeting at Southwest District Health on Thursday turned contentious after the group, People's Rights, was not allowed inside the building. 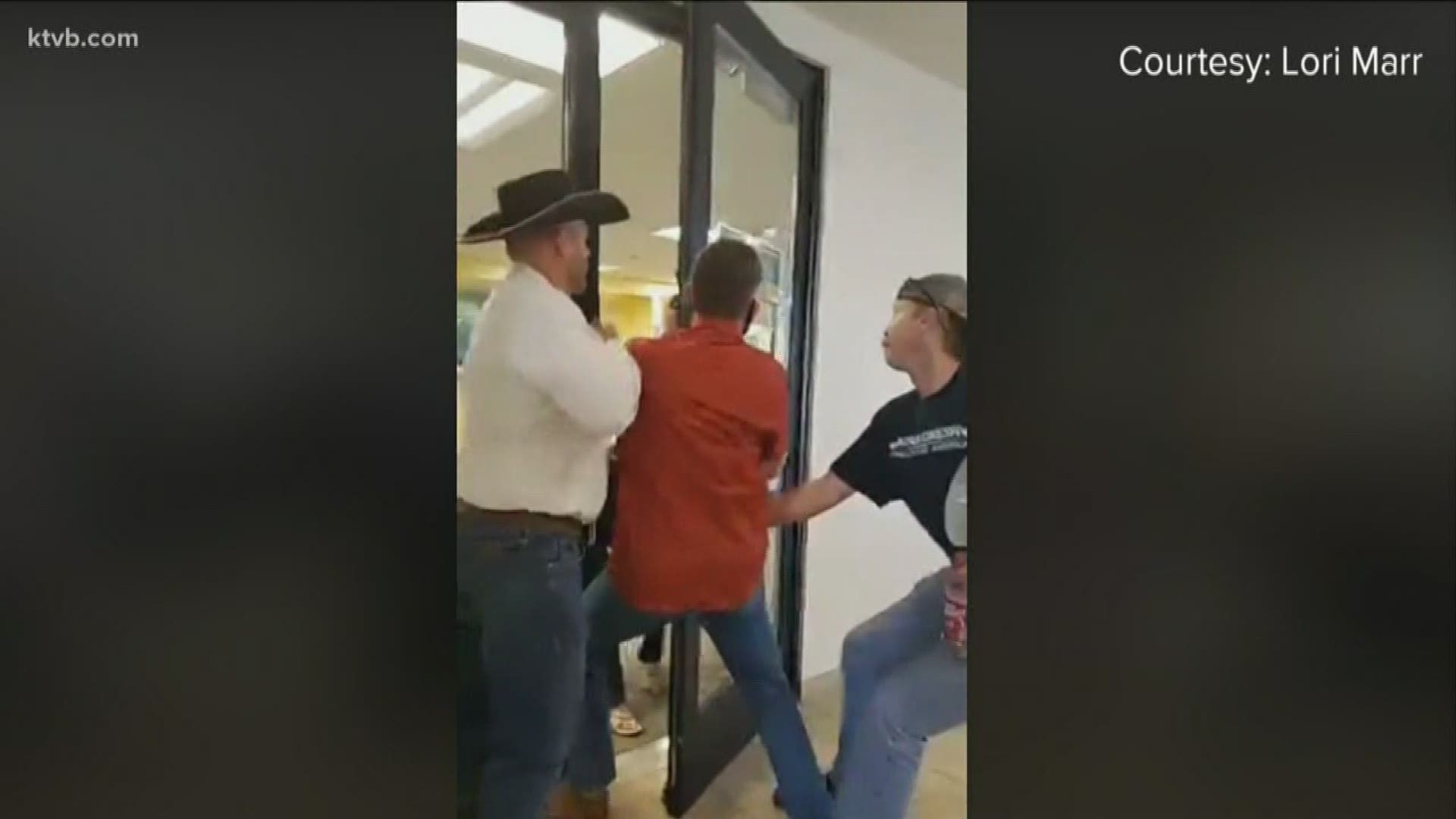 CALDWELL, Idaho — What started as a simple public meeting turned into a shoving match Thursday morning at Southwest District Health in Caldwell.

A group called People's Rights showed up to demand transparency from the government and local health officials. Ammon Bundy, one of the leaders of the 2016 occupation of an Oregon wildlife refuge, is a part of that group.

The group, which consisted of around 40 to 45 people, showed up to the SWDH board meeting to voice their opinions about a possible mask mandate for the health district.

Though the public could watch the meeting via Zoom, no public comment was being taken. And under Idaho's open meetings law, the People's Rights group wanted to be at the meeting in-person.

But the meeting never happened.

A  video recorded of the incident and obtained by KTVB shows Bundy and his group gathered outside the SWDH building, demanding to be let inside for the meeting.

A SWDH staff member then physically blocked Bundy from entering.

Eventually, Bundy pushed his way past the man and gets inside the building. The group attempted to go through a set of interior doors to the board meeting and a tug-of-war over the door ensued between health district staff and People's Rights members.

The meeting was eventually rescheduled and the group left.

In a statement afterward, Southwest District Health said, "The group was not denied access to the building, but was asked to follow a requirement for screenings and face coverings..."

It goes on to state that the group was interrupting clinical services and possibly violating HPAA (health privacy) protocols. Note: the full statement from SWDH can be found at the bottom of this article.

Bundy, however, has a different take on what happened.

"Them [SWDH] making that statement is a misrepresentation of what actually happened," he told KTVB Thursday afternoon.

Though signs were posted inside the building requiring masks and temperature checks, Bundy said that was never directly talked about with them. He claims nobody was asked to wear a mask - they were simply shut out.

"We showed up to the building, they informed us it was locked, there was never anything said about 'You can come in if you wear a mask, if you go through the process,'" Bundy told KTVB. "There was absolutely none of that."

While Bundy admits he would not have worn a mask if asked, that was not the issue and the reason for the tension. He said the main problem was a lack of access to a supposedly public meeting.

“We fully expected to get into the meeting and participate like the public should and the law requires,” he said.

The meeting was never intended for public comment, which Bundy said is another concern. If the board is making a decision that would affect so many, such as wearing a mask at all times, the people should have a say. Bundy said their main purpose in going to the meeting and wanting to speak was to tell SWDH they don't have that authority anyway.

“We are not a people that should be told and not be allowed to have any comments and just, ‘You do what we tell you and we’re not going to give you any opportunity to say anything,'" he said. "It’s basically sit down, shut up and obey and that’s inappropriate for a free people."

Title 74, chapter 2 of Idaho law deals with the open meetings law. It states that all public meetings must have the opportunity for in-person attendance, even if those meetings are held through telecommunications services.

However, in March, Gov. Brad Little issued an emergency proclamation that temporarily suspended the requirement for in-person public meetings due to the COVID-19 pandemic. That proclamation was renewed on July 10.

Former Idaho attorney general David Leroy said because of that order, SWDH did have a legal right to not allow the group inside the building.

"On the face of it, since the governor's proclamation was renewed, there was a basis for the Southwest [District] Health people to not let anybody in the building," he said.

Does Little even have the authority to do that?

According to Leroy, yes.

"He has the authority specifically under 46-1008 (5a) to suspend provisions related to the procedures for the conduct of public business," he said.

Bundy said they disagree with that - and that's all part of what they're standing up for.

"We have been saying from the beginning that the governor has suspended our constitutional rights," he said.

"We don't live in a monarchy, we live in a constitutional republic," Bundy added. "The power is supposed to be to our representatives. It's not right, it's not lawful and I certainly will challenge it in every way that I possibly can."

RELATED: 'It's against our constitutional rights': Boise shop reclassifies business as private after mask mandate

Bundy said he was disappointed they weren't able to get into the meeting on Thursday but he feels the group handled things well.

As to the question of whether Southwest District Health can legally require members of the public to wear a mask inside the building, Leroy said there is no specific law dealing with that. His opinion would be that it is allowed because both public and private buildings have the same authority to regulate conduct. However, he did say it's a legal grey area.

Thursday's meeting was rescheduled and no set date or location has been set, according to SWDH.

Below is the full statement from SWDH about Thursday's events:

Prior to the start of the Board meeting, a group of protesters gathered at the entrance to the SWDH Caldwell building demanding to physically attend the meeting in the same room as Board members and to be allowed the ability to make public comment. The group was not denied access to the building, but was asked to follow a requirement for screenings and face coverings (for all Southwest District Health buildings) that all staff and customers abide by when entering the building for services and daily operations. Southwest District Health had clients in the clinic and the building was open to the public.

After refusing to adhere to screening guidelines, some of the group pushed their way into the building's foyer and attempted to proceed to the Board meeting room. The protestors remained far away from the meeting room where the Board Members were physically present, but were interrupting clinical services and potentially violated HIPAA protocols. The protestors did not enter the Board of Health meeting room.

The majority of the protesters were directed to a meeting room able to provide physical distancing measures for those in attendance and were respectful while waiting to view the meeting.  A small group of those gathered were armed and continued to create disruptions in the facility's foyer, harassed staff in the parking lot, and peered into the building windows scaring staff who were working.