Here are all the wildfires burning in Idaho, eastern Oregon

Treasure Valley's air quality was placed in the 'orange' category on Saturday. Sensitive individuals are urged to limit outdoor time. 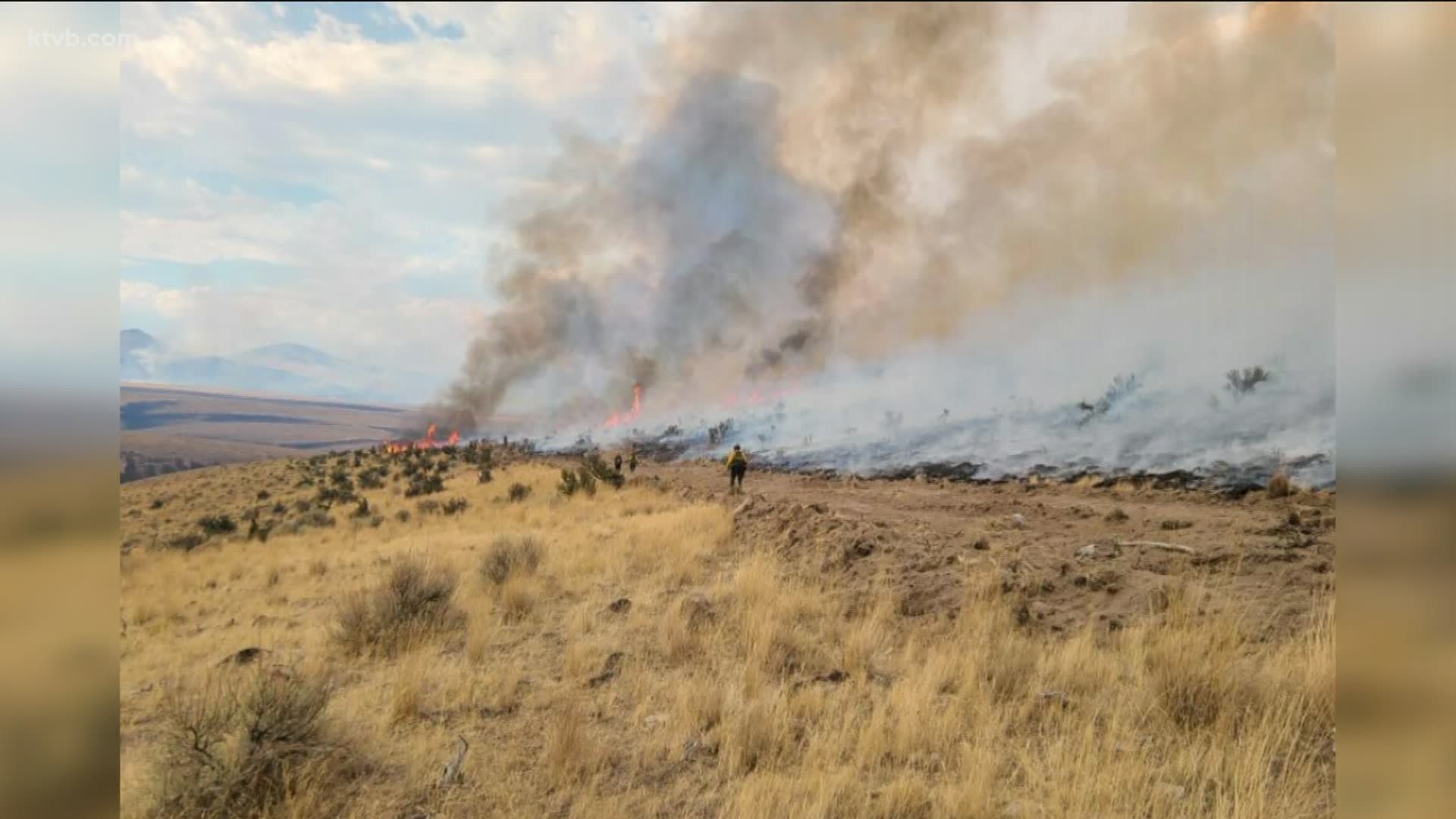 BOISE, Idaho — Hot temperatures and relatively low humidity continue to fuel more wildfires in Idaho and portions of eastern Oregon. Here is a list of some of the bigger ones that are filling the skies above with smoke.

As of Saturday morning, the fire measured 48,128 acres with 75 percent containment. A total of 117 personnel are assigned to the fire.

Natural and cultural resource specialists have been on the ground from the start, advising firefighters of sensitive areas and identifying minimal-impact suppression techniques to lessen the fire's impact as well as observing the fire's effects on the landscape firsthand.

Soon, they will begin planning and implementing the 3 to 5-year process of emergency stabilization and rehabilitation work needed to protect and restore the landscape left behind.

"This is critical mule deer and sage-grouse habitat, in addition to grazing and general wildlife forage," said Dustin Fowler, a rangeland management specialist for Vale BLM. "We hope to spray imazapic (an herbicide) this fall to prevent cheatgrass and medusahead from moving in, then seed native grasses in the spring to start reestablishing the deep-rooted perennials."

Depending on resources and conditions, blue bunch grass, native forbs, bitterbrush and sagebrush could be replanted in key areas.

Containment lines are nearly complete around the perimeter of the Indian Creek Fire, which is located about 9 miles east of Juntura,Oregon.

Crews are now working to reinforce them while restoring disturbed soil to a more natural appearance.

As of Thursday morning, the fire measured 48,128 acres with 65 percent containment. A total of 411 personnel are assigned to the fire.

Fire investigators have determined the fire to be human-caused.

Temperatures should stay in the 80s through weekend and smoke from fires in California and western Oregon should clear out today. Much cooler weather is expected to move in Sunday.

Bow hunting season for deer and elk begins Saturday, and hunters are scouting now, which is adding to the volume of traffic along Highway 20 and secondary roads. Motorists should maintain situational awareness at all times.

Fire restrictions are in effect on BLM lands, including a ban on campfires and open flames, driving or parking on dry vegetation, and operating equipment or engaging in activities that could create a spark.

Crews continue to make good progress on the Bear Creek Fire along the Idaho-Montana border.

The fire is now 85% contained and has burned 11,900 acres as of Monday morning, according to fire managers.

The fire is burning in timber and heavy fuels in the Lemhi Pass area about 29 miles east of Salmon, Idaho.

Resources currently being utilized to contain the fire include 46 personnel.

Cooler weather and precipitation at higher elevations are anticipated by crews, but the weather should return to warm and dry on Tuesday and Wednesday.

Crews will continue with similar operations as in previous days; the majority of resources will be working to coordinate and complete suppression repair and rehabilitation with resource advisors and private landowners.

Anyone using roads in the area of the fire is asked to drive slowly and keep an eye out for fire traffic. Hunters should check Inciweb and/or call for closure information and maps.

Lemhi Pass Road is closed from its junction with Montana Highway 324 to Lemhi Pass. The public is strongly encouraged to stay away from the area due to heavy fire traffic.

The Muldoon Fire is now 100% contained.

The fire burned a total of 374 acres. It was first detected on Aug. 16. The cause remains under investigation.

Stage I fire restrictions are in effect for the Salmon-Challis National Forest.

All Forest Service lands (outside of the Frank Church River of No Return Wilderness and Jim McClure Jerry Peak Wilderness) within the Salmon-Challis National Forest are in Stage I restrictions.

Stage 1 fire restrictions apply to campfires and smoking. Under Stage 1 restrictions, the following acts are prohibited:

1.    Igniting, building, maintaining, attending or using a fire outside a fire structure that is provided by the agency.

2.    Smoking outside an enclosed vehicle or building.

Exceptions to the above Stage 1 prohibitions include the following:

2.    Persons using a stove or grill that is fueled solely by liquid petroleum fuels

3.    Persons using a stove fire (defined in the order)

4.    Persons using metal fire pans within ¼ mile of the of the south side of the Main Salmon River

5.    Persons smoking while stopped in an area at least three feet in diameter that is clear of all flammable materials

6.    Any federal, state, or local officer or member of an organized rescue or firefighting force in the performance of an official duty

Under these restrictions, campfires are allowed only in recreation sites within metal/concrete fire pits.  The restrictions will remain in effect until there is a significant change in fire danger.

The Copeland Fire is now 100% contained

It's burning on land managed by the state bordering on the Payette National Forest five miles east of McCall.

Gusty afternoon winds on Monday caused crews to pull off the line for a few hours until it was safe to return. Predicted weather for the next three days includes the possibility of thunderstorms.

There is smoke around McCall, but it is mostly from fires in California. The smoke cover has helped to slow fire activity on the Copeland Fire.

The 158 personnel still working the fire are continuing interior mop-up and perimeter patrols to extinguish heat and areas of concern.

The Valley County Sheriff's Office has issued a road closure on county road 50403, the Boulder Lake Road at the intersection with Morrell Road.

All recreationists are urged to avoid this area due to the danger of the fire, firefighter traffic, and aircraft dropping water and retardant. Do not access these areas from Potter Lane, Paddy Flat Road, or other accesses, as this creates a safety issue for both the public and firefighters.

Lightning ignited several smaller fires in the region, but fire managers say most of those are contained and controlled.

A reminder - use of unauthorized drones in a fire area endangers the lives of pilots and firefighters. Never fly unmanned aircraft over or near a fire.

This is a developing story and will be updated as new information becomes available.