Univ. of Idaho students bike 300 miles and raise more than $3,600 for Hope House 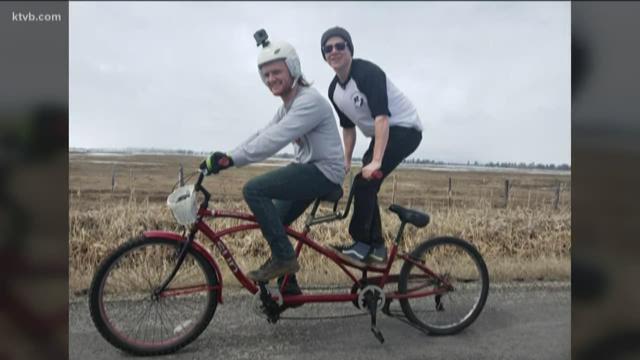 BOISE, Idaho — Many Idahoans will remember the second week of April 2019 as one that had a little bit of everything in the way of weather – sunshine, rain, snow, hail and flooding.

Although their reasons may not be exactly the same as yours, members of the University of Idaho’s Delta Sigma Phi fraternity chapter certainly won’t forget. Neither will the children and staff at Hope House south of Marsing, who are the beneficiaries of more than $3,600 raised through this year’s Bike To Boise event.

Thursday and Friday, more than a dozen Delta Sig brothers traveled the 300 miles from Moscow to Boise on a tandem bicycle – with an overnight stop in New Meadows -- as part of the chapter’s fundraising effort for Hope House.

Members took turns riding two at a time, while the others accompanied them in a caravan of warm, comfortable cars. Because of weather conditions on the Lewiston grade, they did not bike down that particular section of U.S. 95.

Chapter President Michael Penn says they encountered the variety pack of weather mentioned earlier in this story, but floodwaters on the Palouse had receded by the time they left Moscow just after 6:00 a.m. on Thursday morning.

The riders arrived outside the Idaho State Capitol building in Boise on Friday night, and returned the next morning to meet a delegation from Hope House, which provides a home and education for children dealing with emotional issues, developmental disabilities, family dysfunction and adoptions that didn’t work out.

Bike To Boise is a University of Idaho Delta Sigma Phi tradition that began in the 1960s – as a philanthropy for various nonprofits, but focusing in recent years on Hope House, which does not receive any government funds for its operations.

The chapter collected some of this year’s gift for Hope House through fundraisers on campus and online, and also received donations along the journey from Moscow to Boise.