Containment has dropped to 28 percent. A Level 3 Evacuation order remains in effect from the Adams-Idaho county line to Hillman Basin Road. 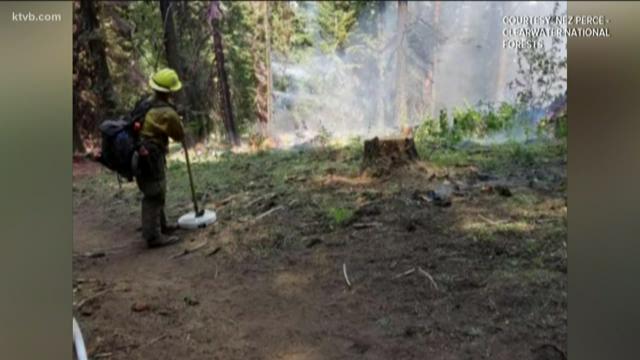 The Rattlesnake Creek Fire is still actively burning in timber and grass on the west side of U.S. Highway 95 near Pollock, and spreading in Adams County.

The fire has burned 7,752 acres as of 9 a.m. Saturday morning, according to officials with the Nez Perce-Clearwater National Forest. It is 28-percent contained.

Air operations were put on hold Saturday afternoon, after a drone was seen over the fire. Helicopters had been dropping water on spot fires along the fire perimeter before being grounded due to the drone. Flying a drone near a wildfire is punishable under the federal law against resisting or interfering with the efforts of firefighters to extinguish a fire. A temporary flight restriction against manned or unmanned aircraft is also in effect for the fire area.

The fire grew on the southern perimeter Friday. One section advanced about a half-mile to the east as it backed down into the drainages above Hillman Basin.

The fight against the Rattlesnake Creek Fire has a new incident commander. Bea Day with the Southwest Area Type 1 Incident Management team #1 took command of the incident Saturday morning.

A Level 3 Evacuation order means residents should leave their homes immediately. Do not delay to gather any belongings or make any efforts to protect your home. If you ignore this warning, emergency services may not be available to you.

A Level 2 Evacuation notice means "be set" to evacuate -- be ready to leave at a moment's notice.

The fire started on July 23, and officials say it is human-caused. So far, no structures have been destroyed.

A total of 375 personnel are fighting this fire, including seven hand crews, 23 engines, one dozer, six water tenders, one masticators and two helicopters.

A NIFC Storymap has information about area closures, fire growth and additional resources. It will be updated periodically. You can also call 208-495-6934 for Rattlesnake Creek Fire information.

The Idaho Transportation Department and local sheriff’s office have traffic control measures in place along Highway 95 for public and firefighter safety. There may be limited visibility due to smoky conditions. Motorists should not stop along the highway and urged to avoid traveling in the area, if possible.