Ivanka Trump and Tim Cook are in Idaho to visit the Wilder School District, which was named as one of the most innovative school systems in the country. 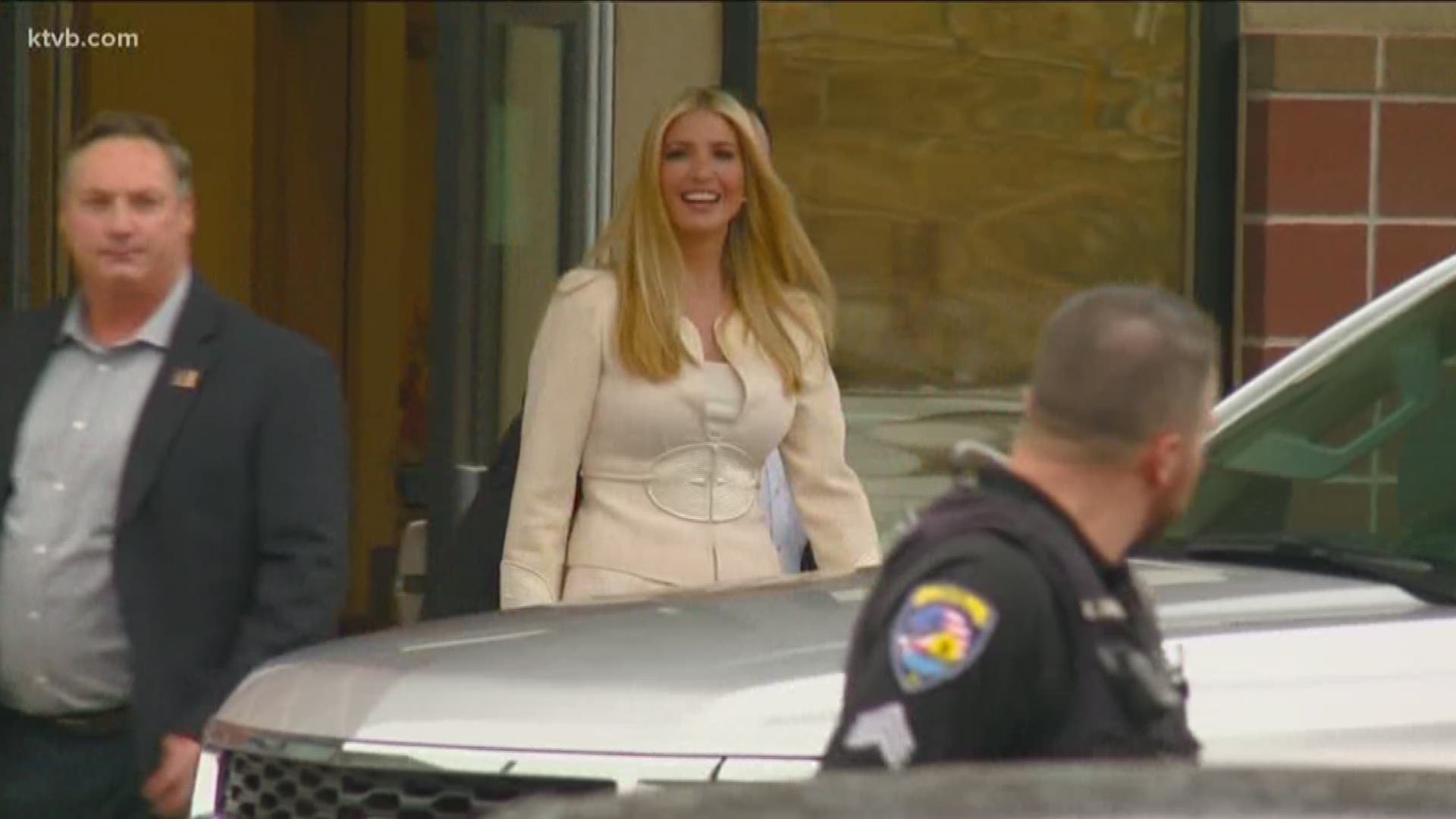 WILDER — Ivanka Trump and Apple CEO Tim Cook were in Idaho on Tuesday visiting Wilder Elementary School after the Wilder School District was named one of the most innovative school systems in the country.

The high-profile visitors arrived by SUV at about 10:15 a.m.

According to the White House, the pair met with first-graders in teacher Lynn Rivera's classroom as students used Apple's Clips app to make science videos. Cook and Trump next spoke with 5th- and 6th-grade students, along with teacher Stephanie Bauer, as they competed in teams to play a Battleship coding game they had created.

Visiting the Wilder School District today with Tim Cook to learn firsthand how they are preparing America’s future workforce using @Apple technology to transform the learning environment and personalize students’ educational experiences based on their unique needs and strengths!

White House director of media affairs Judd Deere described the pair's visit to Wilder Elementary as a closed event "due to space limitations in the classrooms," meaning that KTVB's cameras were not allowed inside. ​

​​​​​​#BREAKING: @IvankaTrump has arrived. She waved to the crowd outside #Wilder Elementary pic.twitter.com/06DnaeiqYz

#BREAKING: @IvankaTrump has arrived. She waved to the crowd outside #Wilder Elementary pic.twitter.com/06DnaeiqYz

Jeff Dillon, the Wilder School District superintendent announced the visit in a letter sent out to parents on Monday. He informed parents the guests would visit select classrooms and engage with students to learn more about how the district uses technology to "enhance student learning and support our personalized learning model".

On Tuesday, he said the event was a whirlwind and he is still trying to process the take-aways and all that occurred.

"It was amazing to watch our kids respond to the questions and interact with both individuals. It was just a beautiful experience," Dillon said in an interview after the visit on Tuesday.

Wilder School District was recognized for its focus on technology and was named one of the most innovative in the country earlier this year.

"Really the focus was about the kids and the amazing things our teachers were able to do," Dillon added. "It really was about how technology can be utilized in a school system when you don't use it to replace a textbook, but use it for creating, being innovative and looking outside the box."

In 2016, the rural Canyon County school district received a grant from Apple's ConnectED program that allowed district administrators to distribute iPads to all roughly 470 students in the school district. Dillon says the district now has about 550 students. The grant also donated iPads to teachers, and equipped classrooms with Apple TV's and and LCD screens.

The Apple products were meant to help students complete their homework and classwork at home and in school. The iPads were intended to help change classroom lessons into individual, personalized teaching plans.

Wilder is a rural farming community, with a large migrant worker population. The school district is predominantly Hispanic and a large percentage of students in the district are considered high-poverty.

Some high school students walked out in protest of the teaching this technology brings with it. @KTVB pic.twitter.com/lG1RVGElIr

The visit drew two small protests early Tuesday morning, with about a dozen people gathering next to the elementary school. One of the protests was organized by PODER of Idaho, with people arguing the first daughter's visit to the predominantly Latin community is tone deaf given what is going on at the border and her father's immigration policies. 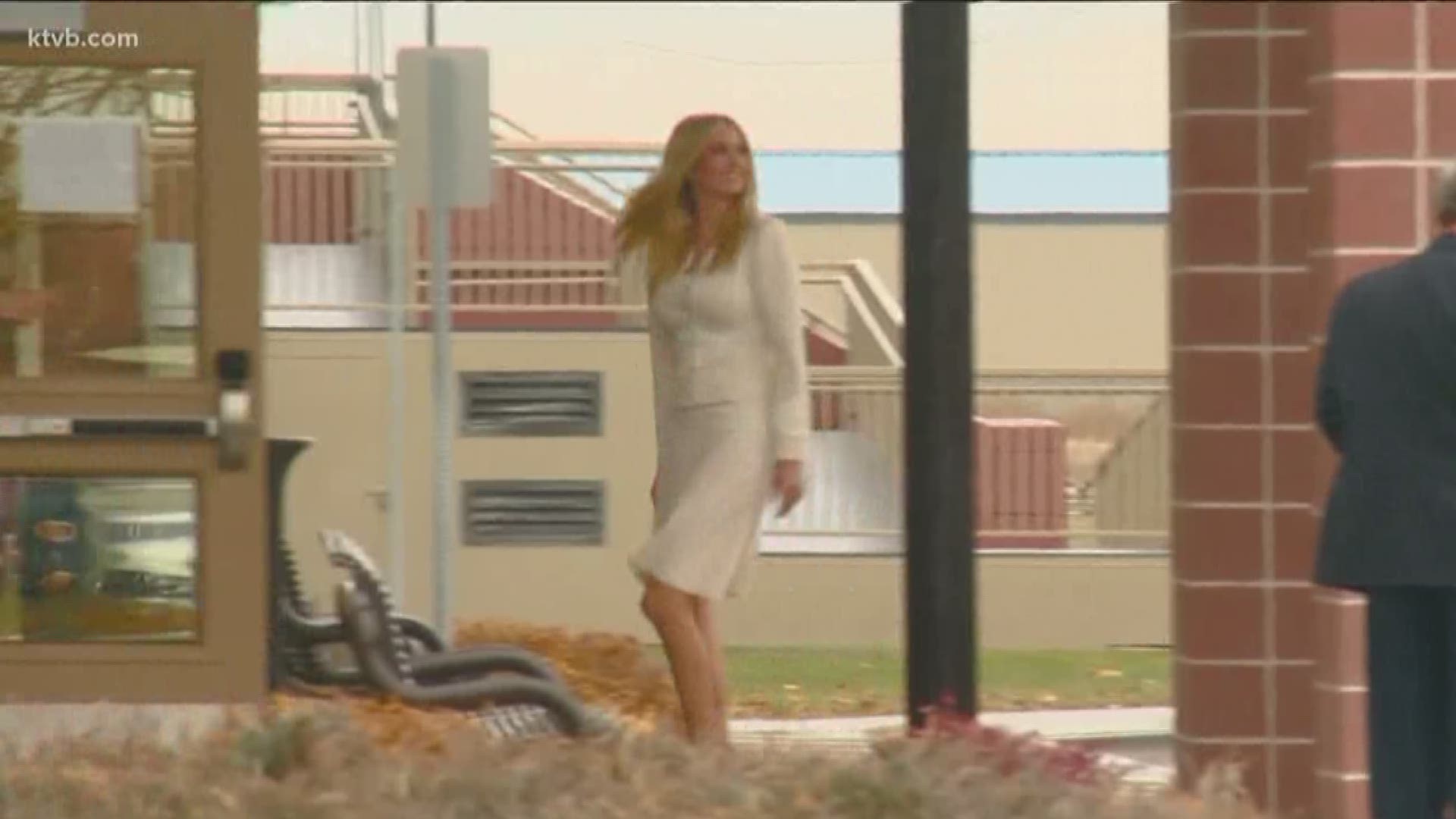 The other protest was organized by a few Wilder School District parents. They were calling attention to their frustrations with technology the school implemented in recent years from the Apple ConnectEd grant; one mom held signs with performance statistics.

Their frustrations lie with the way the district is carrying out their mastery-based, or competency-based, education model. Wilder's assessments and grading of students, curriculums, teaching methods and homework differ from traditional education models. Students must grasp and demonstrate competency and proficiency in one subject matter before moving on in their education.

"There is no teaching involved with it because the teachers have been asked to be hands-off and let the kids learn and take charge of their own education," said Cindy Denny, a mother of two Wilder High school students. "So basically teach themselves. And they're not able to do that, which is why our stats are so low.

"Our graduation rates are low," Denny added. "The administration likes to paint that through rose-colored glasses and say how wonderful we are doing out here and it is simply not true. If they have failing students they just transfer them out of the district and let our numbers go up."

A handful of high school students also participated in a walkout, and say the doors were locked behind them, barring them from re-entering or any other students from walking out.

"The administration is not meeting the students' needs. It is not even coming close to listening to what the students have to say at all," Denny's son Thomas - a junior at the high school - told KTVB. "What looks good on the surface is that we are one of the most innovative schools but the administration says we're utilizing this technology but we're really not utilizing it correctly."

"I think the iPads are a good thing if they are used properly. It is working in other schools, it is working in charter schools and private schools because they are being used as an additional teaching tool - not in replacement of a teacher like they are being used here," Denny said. "Innovation does not equal success. Yes, we have a very innovative approach and we have top-of-the-line technology but we do not have success here."

"We are thanking them because they are acknowledging rural America, and they are honoring a wonderful man - Jeff Dillon, superintendent of the school district - because he is someone that deserves this because he's worked hard," said Gayle Batt, a Wilder resident and Trump supporter.

In response to those protesting the technology Trump and Cook were there to support, Batt said: "This is innovative and there are many people that would love to be in the school district and be able to take advantage of these opportunities."

MORE: Grant puts iPads in hands of every Wilder student

Supporters of the visit and the group organized by PODER verbally clashed at times, with one side chanting "thank you Apple, we love Trump" in support of the visit and the other side shouting "stop gassing babies" - a reference to the tear gas shot at migrants, including young children, at the U.S.-Mexico border on Sunday.

Idaho State Police and other local law enforcement agencies were at the school district campus, as was the Secret Service.